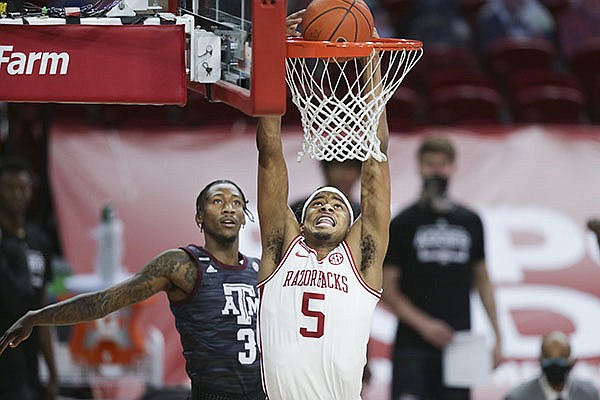 Arkansas guard Moses Moody (5) dunks during a game against Texas A&M on Saturday, March 6, 2021, in Fayetteville.

FAYETTEVILLE — Moses Moody did not want to dive too far into the SEC freshman of the year and player of the year conversations Saturday after No. 12 Arkansas’ 87-80 victory over Texas A&M.

At this point, he said, those regular-season awards are now in the voters’ hands. Moody let his play speak for itself throughout the conference season, during a strong final two weeks and on Saturday against the Aggies.

In what may have been his final game in Bud Walton Arena, Moody matched a career-high with 28 points, led Arkansas to its 11th consecutive SEC win and its 21st victory of the season.

And he did it efficiently, knocking down 9 of 15 shots, including 5 of 8 looks from three-point range.

Moody saved his best perimeter game of the season for the Razorbacks’ home finale. The five made threes were his most in a game all season.

“I think he’s continued to get better all season long,” Arkansas coach Eric Musselman said. “He’s one of the best three-point shooters in college basketball....And then you just look at his freshman stats, where he compares nationally.

“Those would be some of the (freshman/player of the year) arguments. He’s a go-to player on one of the two best teams in the league.”

Moody closed the regular season by averaging 24.5 points in his last four games, and after showings against Alabama and LSU in which he lived at the line and made a combined 27 of 33 free throws, he came back and knocked down 19 of 30 field goal attempts — including 9 of 17 from deep – against South Carolina and Texas A&M.

Musselman said he feels an “overly strong bond” with Moody given the fact that he could have signed with any other major program out of prep school but chose the Razorbacks. His decision and commitment to Arkansas has paid off in a big way.

“He’s played as good as any player in the entire country. I’m not surprised,” Musselman said. ”I think he’s in the right system. I think there’s a great comfort level with him playing here at Arkansas....We kind of painted a picture of a vision, but we hadn’t accomplished much.

“(The Moody family) kind of bought in that we could be a top-10 team and that we could position ourselves to be one of the top teams in the SEC and they bought in.”

In terms of the player of the year discussions, graduate-transfer guard Jalen Tate said Moody is “right up there” and deserves at least one of the awards that will be announced early next week.

Moody has put in the work and made the necessary sacrifices to put together the year he has had, Tate added.

“I mean, I know I’m taking my guys over anybody right now,” Tate said. “He’s definitely stepped up as a big piece of this team.”

In addition to knocking down the biggest shot of the game — a three-pointer from the left wing to give Arkansas the lead for good with 55 seconds remaining — Moody made one of the best individual defensive plays of the season to preserve a 76-76 tie with 1:30 to play.

After catching a pass on the right wing, Aggies guard Quenton Jackson drove the lane and rose up for a dunk attempt. Moody rejected Jackson above the rim.

Following a Savion Flagg layup on the ensuing possession that gave Texas A&M a two-point lead, Moody buried the clutch three-pointer that saved the day.

"The late-game block, that's what it was,” Moody said. “We needed it in that situation. If he would've made that dunk and dunked on me then momentum would have shifted tremendously, so I had to get it.

“That was just one of the plays I knew would alter the outcome of the game.”

Moody played 36 minutes Saturday and Arkansas was plus-15 with him in the lineup. The Razorbacks were outscored 13-5 when he sat.

He was listed as the game MVP, according to KenPom, for the team-leading fifth time in SEC play. Justin Smith is second with three such nods.

“The work that Moses has put in, it hasn’t surprised me,” said Tate, who scored 22 points. “Especially me being older, you’ve seen guys work, you’ve seen guys’ approaches to the game and you’ve seen older guys before you after they leave college and their pro approach.