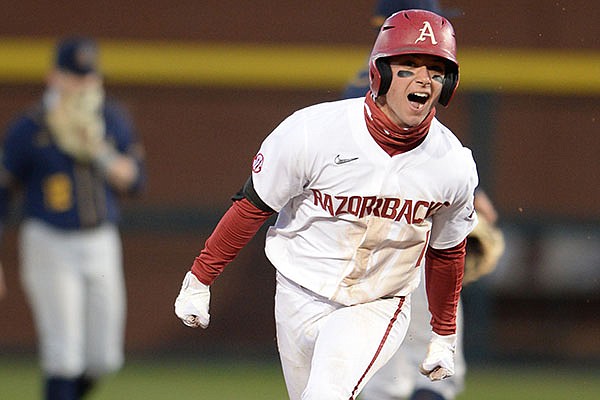 Arkansas second baseman Robert Moore celebrates Friday, March 5, 2021, after hitting a two-run home run to give the Razorbacks a 7-6 lead over Murray State during the eighth inning of the Razorbacks' 7-6 win in Baum-Walker Stadium in Fayetteville.

Robert Moore hit a pair of two-run home runs, including a go-ahead shot in the eighth inning, to lead the University of Arkansas to a 7-6 win over Murray State on Friday before a crowd of 4,218 at Baum-Walker Stadium.

Playing their first game as the consensus No. 1 team on a cold, drizzly day, the Razorbacks (8-0) rallied for the winning runs in the eighth inning or later for the fourth time.

Arkansas snapped a four-game winning streak for Murray State (5-4), which rallied from a 3-1 deficit with a single run in the fourth and a four spot in the fifth to take a 6-3 lead.

Both of Moore’s home runs sailed over the wall in right-center field. His second shot, his third of the season, came on a 1-1 hanging slider from side-arming right-hander Alec Whaley (1-1) after pinch-hitter Zack Gregory led off with a walk.

“Whenever you’re a left-handed hitter against a side armed-pitcher, everything kind of goes into your barrel a little bit, especially when he throws a breaking ball,” Moore said. “He threw a breaking ball the first pitch and I took it, and I remember thinking, ‘That was the one I should have hit.’ Luckily I got another one and was able to stay on it.”

Arkansas relievers Connor Noland and Zack Morris surrendered two-run home runs in the fifth, but the four pitchers who followed shut the Racers down on one hit the rest of the way.

Ryan Costeiu and Kevin Kopps (2-0) combined to walk the bases loaded in the top of the eighth, but Kopps struck out Jake Slunder and Ryan Perkins to escape the inning.

Jaxon Wiggins retired the Racers in order in the ninth inning to pick up the first save of his career and keep his ERA at 0.00.

“We just felt like, ‘Hey, let’s let him finish this thing up. He’s throwing really well and he deserves it,’ ” Van Horn said. “So he went out and got it done.”

Arkansas right-hander Peyton Pallette, pitching on six day’s rest for the second week in a row, was sharp early but his pitch count got up in the chilly, wet conditions. Yet he still posted a career-high 10 strikeouts, fanning all nine Racers in the starting lineup. Pallette came out after 88 pitches through four innings after allowing 2 runs on 4 hits and 3 walks.

“He had pretty good stuff,” Van Horn said. “I felt like he had to throw a few too many pitches. The zone was pretty tight. There wasn’t much ringing guys out on inside fastballs."

Murray State jumped on top 1-0 in the third inning by scoring the first run Pallette has allowed this season. The inning started with a double inside the third base bag by catcher Tanner Booth. Pallette struck out nine-hole hitter Jordan Holly and retired Slunder on a fly ball to deep center.

It appeared Booth made a base-running mistake by not tagging on the Slunder fly ball, but Perkins made it a moot point with his two-out RBI single to center field. Jordan Cozart then reached on an error by shortstop Jalen Battles, but Pallette got out of the jam by striking out Brock Anderson.

Murray State starter Shane Burns walked Moore and Christian Franklin to open the bottom of the third. Matt Goodheart singled to load the bases, then Cayden Wallace’s sacrifice fly to right tied the game at 1-1. Burns struck out Brady Slavens and appeared to skirt more damage when Casey Opitz launched a deep fly ball to right field that caromed off Anderson’s glove for a two-run triple.

Slunder’s RBI single pulled Murray State within 3-2 in the fourth.

The Racers got busy in the fifth, with Anderson launching a deep home run to right field off Noland. After Brennan McCullough drew a four-pitch walk, Moore relieved and Trey Woosley greeted him with a two-run shot, also over the right-field wall.

Moore’s first home run, off Jacob Pennington, pulled Arkansas back to within 6-5 in the sixth inning. That shot followed Battles’ one-out single.