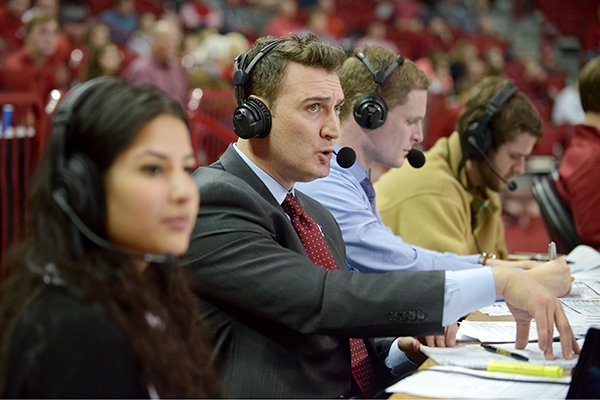 There was a time that Pat Bradley’s shooting stroke was responsible for so many smiles across Razorback Nation.

Now when Bradley pops onto the screen during SEC Network basketball shows, it’s his smile that makes us all smile. No one has a better smile doing college basketball analyst work on nationwide TV.

It’s not forced, just the way Bradley has always been since the first time I met the Everett, Mass., dude who SEC Network studio host Dari Nowkhah calls “Shootah.”

Bradley made the Arkansas Sports Hall of Fame for shooting three-pointers for the Razorbacks. But he’s got a hall of fame smile that never changed, even while becoming a caregiver for his sister, Sam, who died last year of brain cancer.

Helping his parents with Sam is the reason Bradley returned to the Boston area. It’s been a source of pride for Arkansas fans to still see Pat most nights doing analyst work on SEC Network studio shows.

It’s usually a split screen set with Bradley making the drive to Bristol, Conn., to be in a separate studio from Nowkhah. Because of covid-19 travel restrictions, Bradley hasn’t traveled to live games.

The studio for Bradley is a small room in the depths of the ESPN campus, an all-blue room that plays well with his blue eyes.

There is a monitor so he can see Nowkhah in Charlotte. It’s a fun gig, especially since he gets to see almost every Arkansas game. He’s enjoyed the run the Hogs are on under second-year coach Eric Musselman.

Bradley will be watching today as the Hogs try to win their 11th straight SEC basketball game, which would tie the 1994 national championship team for Arkansas’ most in an SEC regular season. He becomes more impressed with Musselman every week.

“Initially, what I saw this year was his ability to draw on so many past experiences in how he constructs a team and then applies it to a new set of players,” Bradley said of Musselman’s coaching. “It can be the Xs and Os, the way he builds a practice schedule for this set of players and the unique way you travel in today’s covid world.”

Bradley loved Musselman’s work last year, too, when the Razorbacks were 20-12 at the time the season was called off.

“It’s just the nature of blending so many new faces,” Bradley said. “He does it with such incredible energy. He’s 24/7 working to figure out how to attack the next team and to assemble this team into proper roles. With Musselman, there is no grey area with roles. He knows exactly how he wants it to fit together based on the talent that he brought in.”

“Both are taskmasters and you better have that as your coach,” he said. “It’s so good for the players. They are never in limbo. The coach — both of them — don’t leave any room to wonder how you fit.

“They both have the ability to have that strong conversation: Here is what I envision for you in our system. It may not be what you think is your role, but here is the only way you will play for me.”

Bradley is not sure how far the Hogs can go in the postseason, but he thinks there may be some hardware on the stage when he returns to Fayetteville at the end of April.

“I’m going to emcee the Hogspys Awards with Danyelle Musselman,” Bradley said. “I’m hoping that travel restrictions ease and I make it. I look forward to being in Fayetteville.”

He’s been in Boston for almost all of the last 12 months since covid-19 changed lives.

“Boston got hit hard early on, but only in some neighborhoods,” he said. “Really close, they were devastated, but not so bad in my little neighborhood. But I had to stop traveling and I haven’t been back to Arkansas in the last year.

“It’s going to be fun and it will be good to say things like ‘fixing’ and ‘wash the clothes’ and people don’t look at me funny.”

Yes, the man who told Arkansas recruiting reporters in 1995 that he played “shooting God” has baffled Bostonians with his Arkansas sayings.

“It is funny,” Bradley said. “I had to learn a new vocabulary when I was doing Arkansas radio (with The Buzz) because no one got it when I said car or yard. The words with ‘Rs’ just didn’t come out right. I learned not to say ‘car,’ just sub ‘vehicle.’”

A misunderstood word is never a problem for long with Bradley. Everyone understands that massive beautiful smile.