Observations from Week 3 of Arkansas baseball 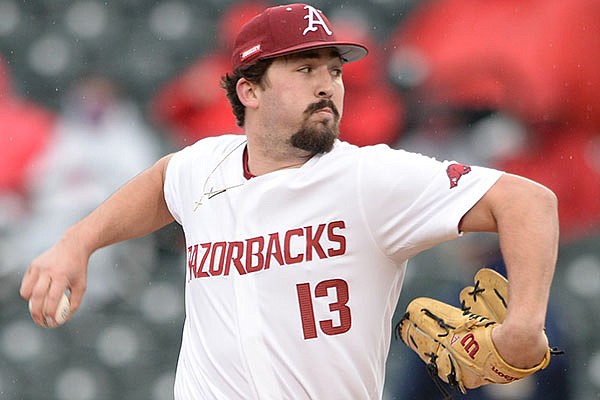 Arkansas reliever Connor Noland delivers to the plate Friday, March 5, 2021, during the fifth inning of the Razorbacks' 7-6 win over Murray State in Baum-Walker Stadium in Fayetteville.

FAYETTEVILLE — The biggest question mark for No. 1 Arkansas through three weeks seems to revolve around the starting rotation.

Right hander Peyton Pallette and left hander Lael Lockhart have been consistent for the most part through three weeks, but the other job seems to be up for grabs as the Razorbacks prepare for their final nonconference weekend.

Zebulon Vermillion transitioned back to the bullpen during Arkansas’ series sweep of Murray State and looked as comfortable as he has all season. Vermillion pitched 2 1/3 scoreless innings and didn’t issue a walk against nine batters.

Walks were the concern for Vermillion through two games when he walked six in seven innings. Walks have been uncharacteristic throughout his career.

Caleb Bolden has also struggled with command through two starts against Southeast Missouri State and Murray State. After earning SEC co-pitcher of the week with a sterling performance against Texas, Bolden has recorded just six outs in two starts. During that time he has given up 6 hits, walked 3, thrown 1 wild pitch and hit 1 batter.

Arkansas coach Dave Van Horn said Bolden pitched on too short of rest between the Texas and SEMO outings, and it taught the coaches some about how to use him. Rested, he still struggled against Murray State and might cause the Razorbacks to pick another pitcher to start at Louisiana Tech this week.

“We’ve got to obviously get that rotation squared away by…a week from today,” Van Horn said Sunday, “and get ready for Alabama here to open up league play.”

One must wonder whether Noland or Wicklander will be asked to fill the third starting role, given their experience. Both were freshman All-SEC in 2019 when they were weekend starters on the Razorbacks’ team that went to the College World Series.

Van Horn has been complimentary of Noland through his two outings. He called Noland’s four scoreless innings against SEMO the best he has seen from the right hander, and said Noland pitched well despite allowing three consecutive base runners — including a home run — during one-third inning of work against Murray State.

Van Horn also praised Wicklander’s work in relieving the two games Bolden started. Wicklander has not allowed a run in six innings this year. Wicklander has issued just one walk, an area with which he struggled last season.

Since allowing 1 run on 2 hits and 1 walk, and throwing a wild pitch on opening day, Kevin Kopps has been one of Arkansas’ most consistent pitchers.

Kopps struck out the side in the series finale against Murray State and threw 10 of 11 pitches for strikes, primarily with his cutter.

“When Kevin gets ahead of you, he can put you away because he’s got a couple of pitches that look real good and they just kind of disappear,” Van Horn said. “You can watch the video board after a pitch and they show it, you can see how that ball sinks and dives and cuts; very deceptive. He’s done a fantastic job throwing the ball over the plate, making other teams swing the bat.”

In 5 appearances and 6 innings since the Texas Tech game, Kopps has allowed 1 run on 2 hits and 2 walks, and struck out 13. He has been the winning pitcher twice and has also earned a save.

“Ever since that performance (against Texas Tech), he’s pretty much thrown nothing but strikes,” Van Horn said.

Van Horn said last week the Razorbacks need plate production from whoever plays left field. It seems the Razorbacks got that over the weekend from Zack Gregory, who started the final two games and had a key pinch hit at-bat in Game 1.

Gregory had reached base in seven consecutive plate appearances prior to a seventh-inning strikeout Sunday. Most came via walk or hit by pitch, but he did hit a solo home run Saturday.

“If that position is not going to hit for power, obviously you’ve got to play defense, but need you to get on base, score runs and he did that today,” Van Horn said Saturday when Gregory reached in every plate appearance.

“He’s just been a tough out at the back of the order there, almost like a second leadoff guy,” Van Horn said. “If he keeps doing that, he’s going to stay in the lineup. It doesn’t matter if you hit a single or a double, get on base, let the guys behind you go to work. That’s what he’s done, so just happy for him. Waiting his turn and when he got it, he’s done a good job.”

Braydon Webb, who began the season in left field, is 1 for 18 at the plate this year.

Before the Murray State series began, Mike Rooney of ESPN and D1Baseball.com assessed the strength of the Ohio Valley Conference during an appearance on the WholeHog Baseball Podcast.

“I think like a lot of the mid-majors in college baseball right now, if you’re only playing against the top 15 kids on their roster, they’re going to be a real handful. Those top 15 can play and they’re older now.”

Rooney went on to say the difference between top-end OVC teams and teams from the SEC is depth, which showed toward the end of the Razorbacks’ last two series against Southeast Missouri State and Murray State. But over the first two games of both series, the OVC teams appeared highly capable of taking down the highly ranked Hogs.

Arkansas rallied from a three-run deficit in the first game against SEMO, and from deficits of three runs and four runs in the first two games against Murray State.

Murray State was picked third and SEMO was picked fifth in the OVC in the preseason, although SEMO received a first-place vote from a coach (not its own), which suggests some indecisiveness about which team is best in the league. It also points toward a conference with multiple strong teams.

Based on their performances in Fayetteville, it would not surprise to see Murray State or SEMO win its league and be a pesky No. 3 or No. 4 seed in some NCAA regional.

Although its early, SEMO (5-6) has the best RPI (No. 30) of any team Arkansas has played and is considered a Quadrant 1 victory. Two ranked Big 12 teams can’t say that through three weeks.

Arkansas infielder Cullen Smith provided some insight into mid-majors’ mindsets when they play a team like Arkansas.

“I don’t know a team that wouldn’t want to come in here to Baum Stadium and play the No. 1 Razorbacks, and try to knock us off the pedestal. They’re doing a great job swinging the bat.”

Van Horn indicated he was happy to see his team get challenged the past two weeks.

“It’s not like we just sat here and played a bunch of mid-majors and got after them. We had to fight for wins,” Van Horn said. “You win 10 in a row, you don’t expect to do that. You look at what’s going on around the country, mid-majors are beating the big schools all the time, so to speak. To beat who we’ve beaten, I’m real proud of the guys — I told them that — for showing up every day and getting after it.

“I’m happy to be 10-0. I truly believe this year, with the schedule we have, where we play our conference games and on the road, we need to get all the wins we can get because there’s not going to be any easy games where we’re just going to go, ‘OK, there’s a win or two.’ We’re going to have to earn them.”

• Catcher Casey Opitz has a hit in all eight games he has started this season and leads the team’s every-day players with a .379 batting average.

• The Razorbacks have won 14 straight games dating to last season. That is the longest win streak since the 1996 team won its first 18 games.

• Arkansas has won 11 straight games at Baum-Walker Stadium, continuing a run of home dominance not see before at the 25-year-old facility. Dating to 2017, the Razorbacks have a home record of 115-21.

• The Razorbacks snapped a four-game losing streak as the No. 1 team in the USA Today Baseball Coaches Poll. Arkansas lost to Arizona State (twice), Gonzaga and Pacific during a four-game trip to Surprise, Ariz., the last time it was ranked No. 1 in 2013.

• Freshman right hander Jaxon Wiggins has retired nine straight batters to begin his career, including seven by strikeout. All nine batters Wiggins faced hit either third, fourth, fifth or sixth in the lineup.

Five different teams — Florida, Ole Miss, Miami, Louisville and Arkansas — have been ranked No. 1 by one of the six major polls through the first three weeks of the season, but the Razorbacks are the only team to win a three-game series in the weekend after being ranked in the top spot.

• Florida lost two of three games to Miami at home while ranked No. 1 in all six major polls to begin the season. The Gators remained No. 1 in two polls that did not update until after the second week of play, when Florida won all four of its games against North Florida and Samford.

• Ole Miss was ranked No. 1 in three polls when it lost two of three games to Central Florida at home in Week 2.

• Miami was ranked No. 1 by Collegiate Baseball Newspaper when it lost two of three games to Virginia Tech at home in Week 2.

• Louisville was ranked No. 1 by Perfect Game when it lost two of three at Georgia Tech over the weekend.

• Arkansas was ranked No. 1 by five polls when it swept Murray State at home over the weekend.

Player of the week

After a slow start, Arkansas second baseman Robert Moore has raised his average to .375 following a big weekend against Murray State.

In three games Moore was 7 for 12 with 2 home runs, 4 RBI and 5 runs scored. Moore also walked twice and had two stolen bases.

Moore had arguably the two biggest swings of the weekend — two-run home runs during the back half of the series opener Friday. His eighth-inning homer gave Arkansas a 7-6 lead.

As he typically is, Moore was also strong defensively throughout the series. On Sunday he and shortstop Jalen Battles combined to turn two double plays, including one to end the game in the ninth inning.