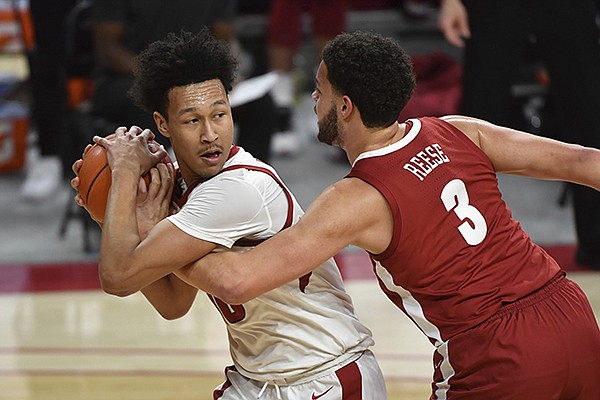 FAYETTEVILLE — SEC champion Alabama and second-place Arkansas would receive top 4 seeds for the NCAA Tournament if it were to start today, according to most bracket projections.

The Crimson Tide, who open SEC Tournament play on Friday against the winner of the Kentucky vs. Mississippi State game, have made a continual rise up the projections while going 16-2 in SEC play after a 5-4 nonconference run.

Jerry Palm of CBSSports.com has Alabama as a 2 seed with a first-round NCAA matchup against Bryant. ESPN.com’s Joe Lunardi listed the Crimson Tide as his top 2 seed on Sunday, ahead of Iowa, Ohio State and Houston on the same line.

The Razorbacks were an NCAA Tournament bubble team by most projections in early January after back-to-bout routs at LSU and Alabama. However, the Hogs have not lost in league play since that 90-59 setback in Tuscaloosa, Ala., and enter the conference tourney riding an 11-game SEC winning streak.

Arkansas will open the SEC tournament against the winner of the 7 seed-10 seed game between Missouri and Georgia.

Palm’s current projection for Arkansas is a No. 3 seed with a matchup against Southern Utah. Lunardi had the Razorbacks as his top 3 seed on Sunday, with West Virginia, Villanova and Texas trailing the Hogs on the 3 line. He has Arkansas paired against Morehead State in a first-round NCAA game.

If the analysts are to be believed, six SEC teams — Alabama, Arkansas, Florida, LSU, Missouri and Tennessee — are cinches to make the NCAA Tournament.

Palm’s other SEC teams in the NCAA field are 5 seed Tennessee, 6 seed Missouri, and 7 seeds Florida and LSU. He also has Ole Miss back up to “first four out” status with the Rebels winning three of their last four games. Palm’s calculations reflect a stronger position for SEC teams than Lunardi’s numbers.

Lunardi’s other SEC projections are 6 seed Tennessee, 8 seed LSU and 9 seeds Florida and Missouri. He has Ole Miss listed among his “next four out.”

An 11-member panel of reporters covering the SEC for the USA Today Network selected Alabama forward Herbert Jones and Alabama Coach Nate Oats as its SEC player and coach of the year on Monday.

LSU’s Cameron Thomas was their choice for SEC newcomer of the year and Jones was defensive player of the year.

The two most-recognized All-SEC teams, as voted by The Associated Press and the league’s coaches, are scheduled to come out today.

The defending SEC Tournament champion will not be around to defend its title, even if that title is almost 2 years old.

Auburn’s self-imposed NCAA sanctions included a postseason ban, so the Tigers’ season ended with Saturday’s 78-71 win over Mississippi State. Auburn won the 2019 SEC Tournament and went on to reach its first Final Four that season.

The covid-19 pandemic wiped out all but two games in last year’s SEC tourney.

“It was really good to finish up winning two of our last three, particularly winning these last two games at home against Tennessee and a good Mississippi State team,” Pearl said. “We finished on a high note.”

The Tigers announced a self-imposed ban last Nov. 22 as part of an investigation into bribery charges brought against former assistant coach Chuck Person.

In a battle for the final double bye at the SEC Tournament, Tennessee used a second-half run and salty rebounding and defense to subdue Florida 65-54 on Saturday on senior day in Knoxville, Tenn.

Tennessee won the board battle 38-29, including a big 18-9 margin on the offensive end.

SEC champion Alabama finished with a combined 4-1 mark against Arkansas, LSU and Tennessee, the other teams who join the Tide with double byes at the SEC Tournament. Their only loss came at the hands of the Razorbacks in an 81-66 decision at Walton Arena. Alabama is the only team with a winning record in the quartet.

Missouri, which got off to a hot start this season, managed a 3-3 mark against the double-bye teams with wins over Alabama, Arkansas and Tennessee, the latter two on the road.

Arkansas, LSU and Florida all went 2-3 against the top four seeds, while Kentucky was 2-4, Ole Miss and Tennessee were 1-3, and Georgia and Auburn finished 1-5. Four teams did not beat the top four: South Carolina and Texas A&M both at 0-4, and Mississippi State and Vanderbilt at 0-5 each.

Now the teams are aligned to open the SEC Tournament on Wednesday at 6 p.m. at Bridgestone Arena in Nashville. Texas A&M has won the last four games in the series but Vanderbilt, which won the first three meetings in 2013 and 2014, leads it 7-6 overall.

Perennial SEC standard bearer Kentucky (9-15) clearly has to win the SEC Tournament to avoid missing the NCAA Tournament field for the first time since 2013.

The Wildcats had started their SEC tournament run in the quarterfinals or better every year since the tourney expanded in 2013 with the additions of Missouri and Texas A&M until now. Kentucky, the No. 8 seed, will face Mississippi State at noon on Thursday with the winner advancing to face conference champ Alabama.

The Wildcats have not won four games to win the SEC Tournament since 1952.

Kentucky has won 31 SEC tournaments, six of them under Coach John Calipari.

Only SEC champion Alabama, the two Mississippi schools, Auburn and Georgia managed to finish out their 18-game conference schedules in the covid-19 impacted season.

Arkansas, LSU, Tennessee and Kentucky got in 17 league games, while Florida, Missouri, South Carolina and Vanderbilt got in 16. Texas A&M, which did not play a game in February, had multiple bouts with coronavirus postponements and lost one game due to the freak winter storm, played 10 SEC games.

28 - Combined SEC Tournament championships by every other league team except for Kentucky, which has won 31

“They have tremendous depth. I think that’s the real separator in this league this year. When you look at the upper echelon of teams, that there’s very little drop-off when you go to the bench.”

“We are an emotional team, a team that struggled with runs positively and negatively really all year. We have not handled them great all year.”