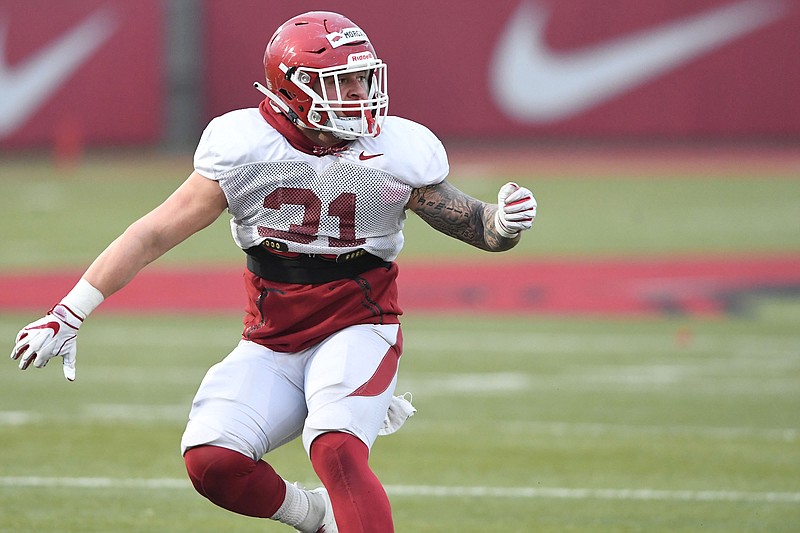 FAYETTEVILLE — Arkansas’ linebackers room is largely the same cast of players as in 2020, but, according to Grant Morgan, there is a different vibe among the group this year.

Morgan, a team captain last season who finished with 111 total tackles in nine games, is one of three senior linebackers who are taking advantage of an NCAA exception that provides players an extra year of eligibility. Hayden Henry and Deon Edwards round out the upperclassman returnees.

As a whole, players in the room have a greater understanding of defensive coordinator Barry Odom’s scheme and what is expected of them. They also feed off one another in training and challenge each other to compete at the highest level.

The linebackers’ collective attitude starts with new position coach Michael Scherer, who served as a defensive quality control analyst with the Razorbacks last season. Scherer’s unit features a number of players who are not much younger than him, but he has earned their respect.

His inside-out knowledge of Odom’s defense has jumped out to Morgan. He has been all ears.

“The way he does things is at a top professional level,” he said. “If you listen to him speak and didn’t see a picture of him you would not know he was young at all. The way he talks about football, his mindset on football, he’s an old-time football guy and he wants us to hit somebody and hit them hard, which is the way it should be played. But he’s got new tricks in his bag the way he’s been, on the defensive side, able to develop over time because offenses have.

“I’m 23 years old, he’s (in his upper)-20s, so I guess he could be my older brother. He’s about Drew (Morgan’s) age or a little older, so it’s funny, but we relate really well and he’s a great coach and a great friend. That’s how we’ve been able to connect and grow with each other.”

Morgan, too, appreciates that Scherer treats everyone in the room the same way. From the freshmen — Marco Avant, Chris Paul Jr. — to the veterans in Morgan, Pool and Henry, he is tough but fair.

While Sam Pittman had questions about the second level of his defense prior to the 2020 season, the position appears to be a strength defensively. Morgan and Pool each totaled 100-plus tackles last fall, and Henry had 25, including three for lost yardage.

Morgan is working out without a brace and is hopeful he will not have to wear one again.

“I’m running good and it’s feeling good,” he added. “Trainers were really good to me, Coach (Pittman) has been taking care of me, the training staff did really well.”

Avant, a former Jonesboro standout, and Paul were wide-eyed when they arrived on campus, but both have made strides developmentally. Scherer has made both stand in front of the group in meetings and detail what they see on various plays.

Paul has changed his body over the last two months, too, Morgan said.

“He's doing good. He's taking a bigger step,” Morgan added. “He's asking questions. That's one thing these freshmen are doing really well. Even Kelin Burrle and JT Towers are taking a step. They're asking a lot of questions. That's what they need to do.

“They need to be in me, Bump and Hayden's ears just asking us questions. Couldn't ask for more from them."

A super senior, Morgan is enjoying it all and taking everything in. He has had fun amid the grind in the past, but the feeling is different for him this time around.

“We’re all best friends,” he said. “We all talk a lot, make jokes in the room. It’s fun to come here. It’s fun to literally come here and sit in the linebacker room and be with each other.”