Edwards puts Arkansas on board on Day 1 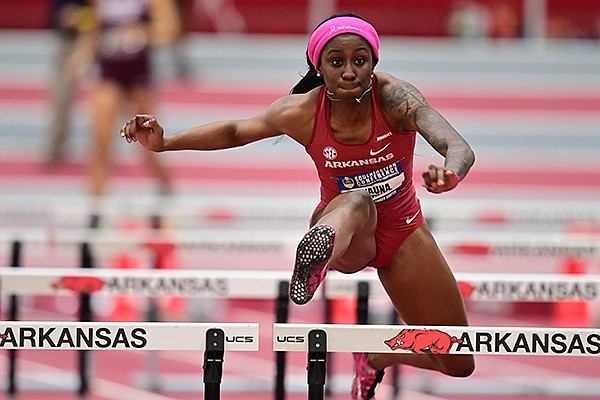 Arkansas' G'Auna Edwards competes during the pentathlon at the SEC Indoor Track and Field Championships on Thursday, Feb. 25, 2021, in Fayetteville.

FAYETTEVILLE — G’Auna Edwards scored a point in the pentathlon for the University of Arkansas on Thursday as the NCAA Indoor Track and Field Championships got underway at the Randal Tyson Track Center.

It could prove to be a big point for the No. 1-ranked Razorbacks considering the close team race Arkansas Coach Lance Harter is expecting with No. 2 Texas A&M.

“There’s no doubt about it,” Harter said. “We need every point we can score to beat A&M.”

Edwards, a junior from Houston who transferred to Arkansas from Texas Tech, finished eighth in the pentathlon with a career-best 4,148 points.

“She’s an All-American,” Harter said. “That’s a pretty special honor to have on your resume.”

Texas A&M junior Tyra Gittens won the pentathlon and set collegiate and NCAA records with 4,746 points. She broke the mark of Georgia’s Kendell Williams, who won the 2016 NCAA title with 4,703 points.

“[Gittens] followed true to form of what she can do,” Harter said. “She’s pretty special.”

Edwards came into the meet ranked 12th nationally and Harter didn’t project her to score, so the eighth-place finish was a bonus.

“She got on the board as far as points go,” Harter said. “It’s a starting point, and we’re headed in the right direction.”

Arkansas has 24 other entries for events today and Saturday, including Edwards coming back in the long jump today.

“She had two even further long jumps than her top mark [Thursday],” Harter said. “Unfortunately they were fouls, but not by much. If we can get her adjustment on the board, then off we go.”

In the men’s heptathlon, Arkansas junior Daniel Spejcher is ninth through four of seven events with 3,123 points, and senior Etamar Bhastekar is 11th with 3,115.

Razorbacks senior Markus Ballengee, the SEC runner-up who is ranked third nationally, had to drop out Thursday after two events because of an injury.

Arkansas freshman Ruben Banks finished 15th in the weight throw Thursday with a best mark of 64-10 3/4.