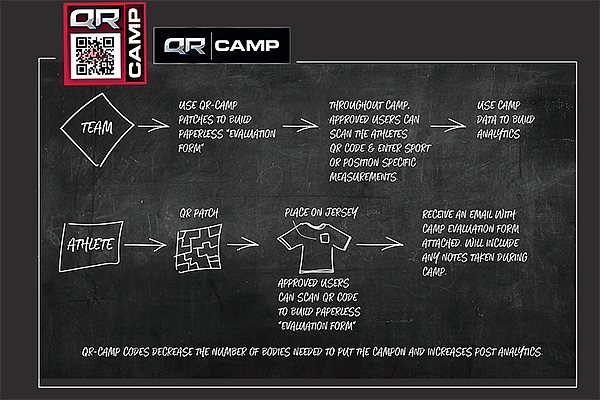 A screenshot from QRRecruiter.com explains how the platform helps baseball recruits.

If you have listened to Bubba Carpenter on Arkansas baseball radio broadcasts, the jargon of the game is front and center.

Velocity is simply “velo” with Carpenter. Exit speed off the bat is mentioned on every hard hit.

You may hear talk about launch angle pop up now and then.

But when Carpenter phoned out of the blue on a Sunday night after the Razorbacks had completed another sweep, the former Arkansas baseball star had a new “launch” to dissect.

In typical Carpenter style, there was something new and analytical to bubble about on the other end of the phone line. It was my introduction to the QR Recruiter.

“You need to call Norm (DeBriyn),” Bubba said. “He’s a believer and everyone I know in baseball is raving about this — from the coaches, players and scouts.”

It’s the brainchild of Fayetteville’s Wayne Woolsey, a private jet pilot and mechanic. He flew the likes of Alice Walton and Johnny Mike Walker before deciding it was too much time away from home, most notably watching son Declan play baseball.

It also gave him time to brainstorm QR Recruiter when he didn’t appreciate the way college coaches and scouts were botching attempts to categorize and file information on the players on his son’s high school or travel teams. Declan plays second base at Fayetteville High School.

A light bulb began to blink and it burned bright after Woolsey asked for a meeting with DeBriyn and the Arkansas baseball staff. He asked if it would be beneficial if there was a free service for coaches and scouts that featured an easy to access database of players and their information.

Two-and-a-half years later, QR Recruiter launched. The Fayetteville High and Shiloh Christian teams are the first in the database, but it will explode with teams and players soon. Everyone who sees it jumps aboard.

Players pay a $35 fee when they can afford it, but Woolsley is quick to “scholarship” those who can’t. No one will be left behind.

“That’s what gets me excited,” said Carpenter, who coaches travel teams. “It evens the playing field. Not everyone can go to the expensive camps. Kids slip through the cracks.

“I’m passionate about what Wayne has created. I’ve given him some feedback and he’s done it right.”

Carpenter grew up playing baseball in Winslow, then flourished at West Fork High School. He was a three-time All-Southwest Conference performer for the Hogs under DeBriyn.

“I may have fallen through the cracks today because my dad couldn’t afford to take me to these kind of camps,” Carpenter said. “So that’s why I think this is important. So do the coaches I’m around.”

The concept revolves around the Quick Response codes you see on everything these days. Players will wear their unique QR tag sewn on their uniforms so scouts or coaches find that data via their Smartphone.

Complete teams will also have their own QR code and that will be displayed near their dugout on a big banner. It’s amazing technology with searchable databases by any analytic imaginable, including GPA, velocity or any other measurement scouts decide it’s important in the future.

“When Wayne sat down with me to explain it, it sure looked amazing,” said DeBriyn, the former Hall of Fame coach for the Razorbacks now scouting for the Colorado Rockies.

“I’ll use it if I continue to scout. But where it really is going to be useful will be for junior college and the mid-level college coaches.

“Will Dave Van Horn and his guys need this? Probably not. They are going to know the ninth graders with the talent already.

Woolsey thought he had hit upon a great tool, but didn’t walk away from his latest job (home appraiser) until DeBriyn thought he’d come up with a winner. There had to be some convincing of wife Blake first.

“I explained it to Blake and she wasn’t so sure it held value,” Woolsey said. “We had a dinner at church over a project she had been working on with Norm so they sat together. He convinced her it was something I should pursue.”

It didn’t take much to convince DeBriyn.

“I had him run a code of a player and he just said, ‘Wow, you just changed everything,’ and I realized that my two-and-a-half years might turn into something after all,” Woolsey said. “He scanned the code and video started coming up, GPA, everything you could ever want.

“Norm kinda smiled and had this funny look on his face and said, ‘Wayne, where did all that come from.’ I explained it and he just said, ‘Wow!’ That’s when I knew maybe I had something.”

Woolsey said his expenses have been low.

“It’s just been a lot of sweat equity right now,” he said. “We launched two weeks ago and we have interest from 32 states right now. I think fast pitch softball will come aboard, too. Everyone who sees it signs up.

“All of the summer teams are coming aboard. High school teams are starting to get back to me.”

The motivation for QR Recruiter was simple.

“I was tired of the BS,” Woolsley said. “I wanted to change a broken system of finding players.”

Because of their relationship through church, DeBriyn has watched Woolsley’s idea hatch, then become reality.

“He had an unbelievable passion and did all his homework,” DeBriyn said. “I wanted him to get feedback from the Arkansas coaches on whether it would work. Now, I see things proliferate.

“I am pretty sure it’s the kind of analytics I need as a scout. I’ll use it and it’s going to help kids. It’s inexpensive for the kids.”

Players pay $35 for a patch that stays activated for 12 months. Recruiters don’t pay a dime to access their information.

“It’s really a simple idea,” Woolsey said. “It just took a long time to code it. Now I’m to the point where I think we can help kids.”

It’s at a fun stage — the website QRRecruiter.com is up and running — where things are beginning to happen quickly, all in a positive manner. As an entrepreneur, Woolsey is reminded of a famous line from Winston Churchill.

“I think it fits,” Woolsey said. “He said success is the ability to go from failure to failure without losing enthusiasm.

“I probably could still be a jet pilot, but I was just gone too much. I am still licensed to fly and work on four different jets.”

There are no plans for that kind of a launch anytime soon.