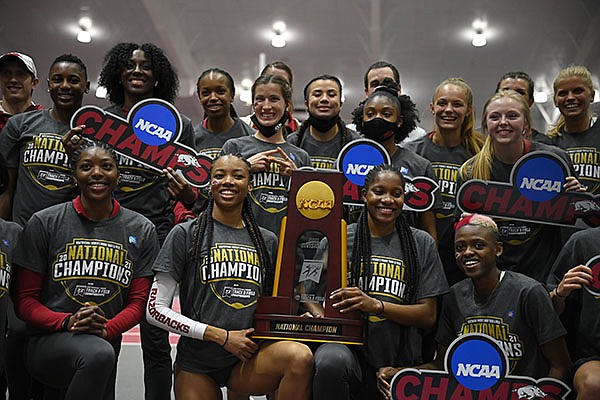 The Razorbacks scored 17 points in the 3,000 meters to take the lead over second-place Texas A&M and clinch the team title.

Arkansas won the meet without an individual or relay champion. The Razorbacks compiled 68 points and scored in 10 of 17 events.

The Aggies finished with 57 points.

Arkansas chipped away at Texas A&M’s lead throughout the final night at Randal Tyson Track Center. Krissy Gear and Kennedy Thomson finished second and third in the mile early in the night’s running events to contribute 14 points to the team score. Gear finished the mile in 4:32.37, about 1.6 seconds ahead of Thomson.

Daszay Freeman gave the Razorbacks eight points with a second-place time of 7.99 seconds in the 60-meter hurdles. Shafiqua Maloney’s third-place time of 2:01.22 in the 800 added six points to the team score.

Arkansas also received five points from Wilson and Rosey Effiong in the 400, and two points from Jada Baylark in the 60 on Saturday.

Texas A&M had the team lead with 26 points entering the event’s final day, 16 points ahead of the Razorbacks.

Arkansas won an indoor championship for the third time, and for the second time on its home track. The Razorbacks also won an indoor title in Fayetteville in 2015.

Arkansas won the NCAA’s previous indoor meet in 2019. Last year’s meet was called off one day before it was scheduled to begin due to the covid-19 outbreak.

Lance Harter, the Razorbacks’ coach, won a national championship for the sixth time in the three sports he coaches — all since 2015. Counting cross country and outdoor track and field, Arkansas has won four straight NCAA championship events dating to 2019.

The Razorbacks will attempt to defend their NCAA cross country title Monday in Stillwater, Okla., with some of the same distance runners who competed indoor this week. Arkansas won the SEC cross country championship and was the No. 1-ranked team in the sport at the end of the fall season.

Oregon won the men's indoor championship Saturday with 79 points. LSU was second with 56.

Arkansas' men finished in a seventh-place tie with Alabama with 22 points.