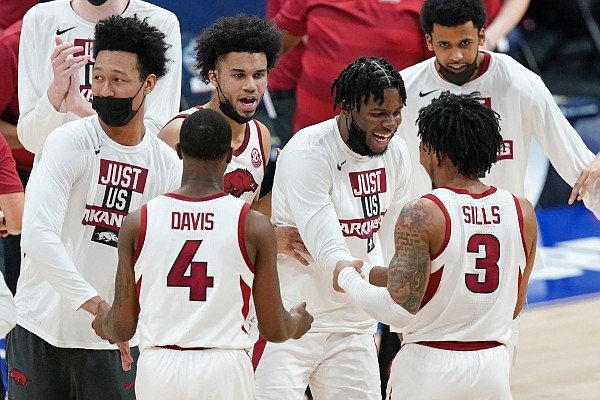 FAYETTEVILLE — University of Arkansas freshman forward Jaylin Williams was in uniform for pre-game warmups Friday, but he did not play for the third consecutive game for an undisclosed reason.

The SEC Network broadcast crew said Williams would be available to play if the team advanced to Sunday's tournament final.

The freshman last played against LSU on Feb. 27. He averaged 10.5 points and seven rebounds over a two-game stretch against Alabama and LSU to end February.

For the season, Williams has contributed 3.9 points on 50% shooting and 4.6 rebounds per game.

Arkansas forward Justin Smith has played efficiently on the offensive end over the last several weeks, especially in the second half and overtime of games.

Smith did it again in Friday’s 70-64 win over Missouri in the SEC Tournament quarterfinals en route to 16 points, 8 rebounds, 3 assists, 2 steals and a blocked shot.

Entering the SEC Tournament, Smith was 11 of 23 from the floor in the first half of the last six games and 28 of 36 after halftime.

On Friday, he scored 3 points on 0-of-5 shooting before the break and 13 points on 6-of-7 shooting in the second half.

In his two matchups against Missouri, Smith is 12 of 15 from the field in the second half and overtime.

The Razorbacks were not kind to Missouri guard Dru Smith in the teams’ three meetings this season. He turned the ball over five times on Friday against five assists.

Smith committed a season-high six turnovers at Arkansas on Jan. 2, then matched it Feb. 13 in the Razorbacks’ overtime win in Columbia, Mo. He had six total turnovers in two games against Arkansas in 2019-20.

Razorbacks freshman guard Davonte Davis has made a habit of changing things up with his in-game apparel over the past couple of months.

Against Missouri, his ninth consecutive start, he opened the game wearing a white headband. By the time both teams returned to the floor from the under-12 media timeout, the headband was gone.

It is the seventh time Davis has added or removed his headband during a game since Jan. 9.

He finished with 11 points on 4-of-12 shooting, 6 rebounds and 4 assists in his first postseason appearance. Arkansas outscored Missouri by 11 points when he was in the lineup.

Florida forward Omar Payne was ejected early in the second half against Tennessee for delivering an elbow that floored Tennessee forward John Fulkerson and sent him to the locker room for concussion testing.

Referee Pat Adams assessed a Flagrant 2 foul, and automatic ejection, to Payne on the play, which came after the two locked up while battling for position on a rebound. Payne first shoved Fulkerson in the neck with his left forearm, then Fulkerson appeared to start grabbing Payne’s jersey from behind as the pair started up the floor. Without looking behind, Payne jerked his right elbow up into the right side of Fulkerson’s face, dropping him immediately.

Tennessee’s Yves Pons immediately got in Payne’s face, without further incident, and order was restored. The Vols led 35-26 at the time, but Santiago Vescovi made both free throws for the foul, then Keon Johnson hit a jumper for a four-point possession and a 13-point lead.

Fulkerson was taken to the hospital for observation, Coach Rick Barnes said, to check on his right eye.

“My gut feeling, he took two pretty good licks right there and I’d be surprised if he is available,” Barnes said of Fulkerson today.

Alabama guard Joshua Primo, a 19-game starter, was helped into the tunnel and into the locker room for evaluation after suffering what looked to be a left knee injury in the second half Friday.

A Mississippi State player, chasing a loose ball, barged into Primo’s left leg, and the freshman fell immediately to the floor shouting in pain.

Primo stayed down for a spell, then needed assistance getting up with a little more than 12 minutes remaining. Primo entered the postseason as Alabama’s fifth-leading scorer, averaging 8.1 points and 3.4 rebounds in 22.7 minutes per game.

The Razorbacks’ 70-64 win over Missouri in the first game of the second session gave higher seeds a 7-1 record at the SEC Tournament. It came on the heels of 4 seed Tennessee’s 78-66 win over Florida, which also held chalk.

The only lower seed to win through that point had come in the 8-9 game, with ninth-seeded Mississippi State edging Kentucky 74-73 in Thursday’s early game.

Tennessee forward Yves Pons had two blocked shots in the final minute against Florida and finished with a school-record nine to tie the SEC Tournament record.

Pons, who had six blocks in the first half, wrapped up his day of swats by blocking shots by Jacksonville’s Tyree Appleby and Scottie Lewis during Florida’s penultimate possession.

“I mean, he was locked in. You could tell it,” Tennessee Coach Rick Barnes said.

Kentucky’s Andre Riddick held the SEC Tournament record with nine blocked shots in an 82-65 win over LSU on March 14, 1993.

Kentucky failed to qualify for the SEC Tournament quarterfinals for the first time as a participant with Thursday’s 74-73 loss to Mississippi State.

Mississippi State snapped a 15-game losing streak in its series against Kentucky, and Wildcats Coach John Calipari fell to 16-1 in his career against the Bulldogs.

Mississippi State’s 44-30 halftime lead tied for the biggest deficit through 20 minutes in Kentucky’s SEC Tournament history. The others were a 36-22 deficit to Arkansas in the 2000 tourney, and a 37-23 deficit to Vanderbilt in 2013. The Wildcats lost all three of those games.

SEC Commissioner Greg Sankey was asked in a video conference with reporters at the SEC Tournament on Thursday evening how he thought attendance would be affected by Kentucky’s early departure.

The Wildcats, who have typically sported the largest contingent of fans, were eliminated 74-73 by Mississippi State in the early game Thursday.

Sankey harkened to tournaments past, with a little Arkansas flavor.

“When I start at the top, the University of Alabama won the regular season. I watched the Arkansas-Kentucky game at the Georgia Dome, I think the ’95 championship, that was full of blue and red.

Sankey called Nashville “a very accessible city,” and predicted there would be about 3,000 fans for all the remaining sessions.

“I know Kentucky fans well enough that we’ll still have some blue in here the rest of the weekend, too, because they enjoy SEC basketball themselves,” Sankey added.

• Arkansas Coach Eric Musselman improved to 9-2 in his career on a neutral floor with four or more days of preparation.

• If Florida makes the NCAA Tournament field as expected, it’ll be the Gators’ fourth consecutive trip to the tourney, the longest active streak in the SEC with Kentucky not having a shot to make the field this season.