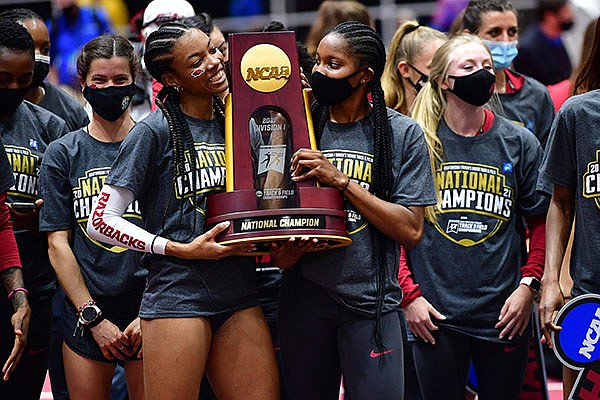 FAYETTEVILLE — The No. 1 University of Arkansas women flexed their superior numbers late Saturday to track down and blow past Texas A&M and claim their third NCAA Indoor Track and Field Championship.

Lauren Gregory placed second with a strong finish in the 3,000 meters to spearhead the Razorbacks’ 17-point haul in the event and give Arkansas an insurmountable 15-point lead heading into the 1,600 relay at the Randal Tyson Track Center.

Arkansas claimed back-to-back titles, having been the defending champion from 2019 when the 2020 event was canceled due to the coronavirus pandemic.

The Razorbacks didn’t have any event winners, but they distributed scoring all over the championships and had 11 scorers in seven events Saturday.

“We had a whole bunch [of heroes],” Coach Lance Harter told ESPN. “We were represented in 13 of the 17 events, so it was a true team effort. That’s what makes it so extra special … we just continued to peck away at Texas A&M, which we thought was just a phenomenal team and assembled with great athletes, but we had our fair share of athletes as well.”

On the men’s side, Oregon claimed its fourth indoor championship on the strength of six individual champions to blow away the field with a 23-point win over LSU.

The SEC champion Arkansas men finished in a tie for seventh with Alabama with 22 points.

The Razorbacks women lost out on potential scoring on Friday, but kept chipping away Saturday to overwhelm the Aggies. Texas A&M was powered by Tyra Gittens’ 26 points with titles in the pentathlon and the high jump.

Texas A&M also raced to a meet record 3:26.68 in the closing 1,600 relay, but the Razorbacks quartet of Paris Peoples, Morgan Burks-Magee, Tiana Wilson and Shafiqua Maloney came home in third place (3:28.07) for six points to cap the 11-point win.

Gregory’s kick brought her nearly even with BYU’s Courtney Wayment heading down the homestretch in the 3,000, but Wayment kept her form and edged the Arkansas junior 9:01.47 to 9:01.67, ahead of Auburn’s Joyce Kimeli, who was trying to pull off a double in the 5,000 and 3,000.

Gregory was joined by seniors Katie Izzo (9:03.85) and Abby Gray (9:05.52) in fourth and fifth to complete the 17-point event for the Razorbacks and put the Aggies in their rear-view mirror.

Daszay Freeman and Maloney gave the Razorbacks 14 points in the middle portion of the meet to draw Arkansas close.

The Razorbacks, trailing by 16 points to start the day, began chewing up points early in the afternoon, with a big second and third in the mile run from Krissy Gear (4:32.37) and Kennedy Thomson (4:33.95) for 14 points.

“We had some of those breakthroughs time and time again,” Harter told ESPN. “We told them to start with the mile, the first event of the day. We had a breakthrough there, and then it just snowballed from there.”

Arkansas was within two points of Texas A&M after Maloney’s gutty effort in the 800.

Earlier, Jada Baylark provided two points for Arkansas with a seventh-place finish in the 60 at 7.228 behind surprise winner Kemba Nelson of Oregon (7.05).

Wilson and Rosey Effiong finished fifth and seventh in the 400 to give the Razorbacks five more points.

Oregon ran away from the competition on the men’s side, scoring a school-record 79 points, the second-highest ever at the championship.

“We figured we had a great shot at top three,” Arkansas Coach Chris Bucknam said. “We knew that LSU and Oregon were kind of out there ahead of us, and all the rest of the teams were chasing them for a third-place finish.

“We thought we had a great shot at it, and we just ran into trouble from the very first day. To finish in the top seven after what we’ve been through is a testament to the character of our team and how we battled for every point.”