Arkansas connections in the NCAA Tournament 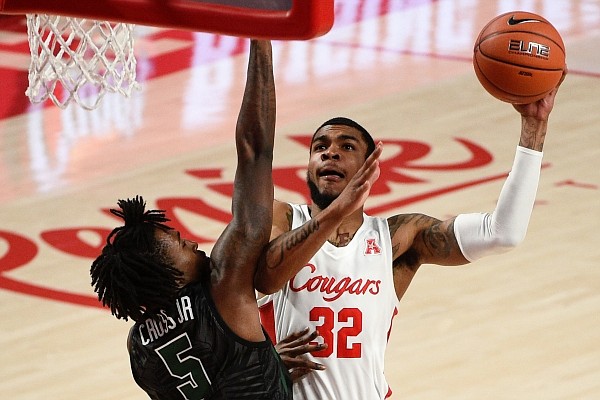 As the 2021 NCAA Tournament gets underway Thursday, here is a list of participants who formerly played or coached at Arkansas and how their seasons have gone to this point:

The most recent player to transfer from Arkansas found a home with veteran coach Kelvin Sampson and a great deal of team success in 2020-21. The Cougars enter the NCAA Tournament as a No. 2 seed and will play 15-seed Cleveland State on Friday at 6:15 p.m. on TruTV.

Chaney has played in all 27 games this season and is averaging 4.9 points on 65.3% shooting and 2.8 rebounds per game. He has started six of the last seven games, including each game in the league tournament.

The Cougars are 8-0 in games Chaney has been in the starting lineup.

Chaney reached double figures in scoring three times, adding a career-high 18 points against Alcorn State on Dec. 20. He is shooting 71.7% at the free throw line after making less than 53% of his attempts in each season with the Razorbacks.

Osabuohien showed flashes of great defense and a nose for rebounding in his time at Arkansas, and he has grown in those areas with the Mountaineers (18-9). West Virginia is a No. 3 seed in this year’s tournament and faces 14-seed Morehead State on Friday at 8:50 p.m. on TruTV.

According to KenPom analytics, Osabuohien ranks 14th nationally with a steal rate of 4.5%. He was also in the top 20 in the Big 12 in offensive and defensive rebound rate, assist rate and block percentage.

A walk-on at Arkansas under former Razorbacks coach Mike Anderson, Glasper’s path to the NCAA Tournament with Oral Roberts has been interesting. He spent time at Division II Arkansas Tech before landing with the Golden Eagles (16-10).

Glasper is Oral Roberts’ third-leading scorer at 11 points per game on 43.5% shooting and 35.2% from three-point range. On Dec. 20, he scored 14 points on 5 of 13 from the floor against Arkansas in Bud Walton Arena.

A senior guard, Glasper has played in 18 games and scored in double figures 12 times. He has not played in the Golden Eagles’ last eight games.

During Summit League play, Glasper ranked in the top 20 in assist rate and steal percentage, and owned the No. 15 offensive rating, per KenPom.

A former assistant coach at Arkansas, Brown took over the head coaching job with the Shockers amid turmoil in the program. Gregg Marshall resigned following an internal investigation into allegations of physical and verbal abuse.

According to Wichita State, Brown, who has been with the school since 2014, is the first Black men’s basketball coach at a Division I program in the state of Kansas.

He took over as the Shockers’ interim coach in November and led the team to a 16-5 season and No. 11 seed in this year’s NCAA Tournament. Wichita State finished American Athletic Conference play 11-2 and went 1-1 in the league tournament, falling to Cincinnati.