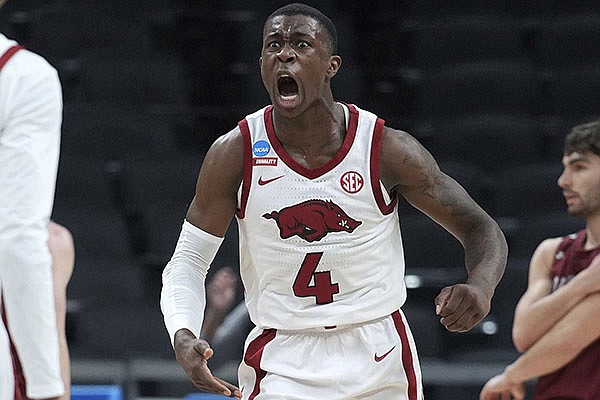 Arkansas' Davonte Davis reacts to a last second basket to end the first half during a first round men's college basketball game against Colgate in the NCAA Tournament, Friday, March 19, 2021, at Bankers Life Fieldhouse in Indianapolis. (Jack Dempsey/Pool Photo via AP)

Almost every time, talent reigns supreme in the first round of the NCAA Tournament.

But sometimes it takes a bit for the thoroughbreds to stretch their legs and run. They may come out of the gates shaky, but form generally holds.

That is exactly what it looked like when No. 3 seed Arkansas powered past 14-seed Colgate 85-68 Friday afternoon in their tourney opener in Bankers Life Fieldhouse in Indianapolis.

That’s what Jim Counce saw from the stands. Counce, a Fayetteville heart surgeon, boarded a private plane Friday morning to watch the game. The outcome thrilled the former Arkansas player and assistant coach.

“It was exciting,” Counce said by phone. “There sure were a lot of Arkansas people here. It was great. I came up for just one game, but it’s going to be hard to go home. It was great fun.”

Well, the last 5:24 of the first half and the last 8:41 of the second half was great fun from the Arkansas perspective. A slower but hot-shooting Colgate team made the start of each half anything but fun for the Razorbacks.

“We just wore them down,” Counce said. “If you saw the final score you would never believe it was a tough game, but it was.

“We won the game with that 17-0 run over the last nine minutes of the first half. That was crucial. We started to press them and went uptempo on defense. Colgate didn’t want to play that way. We turned it into a scramble with a small-ball lineup.”

“Devo was just awesome,” Counce said. “He made a bunch of crucial plays. He was picking up loose balls and had assists, steals and made a couple of baskets.”

The stretch run was marked by wonderful low post work by Smith, the 6-7 graduate transfer from Indiana. He finished with 29 points, 13 rebounds, 5 steals and 2 blocked shots.

He played all 40 minutes, the only player on either side to go the distance.

“They were running a two-man game with Justin and Jalen and Colgate didn’t have an answer,” Counce said. “They did that for about six or seven minutes and I don’t know that Colgate ever stopped it.”

Counce spent plenty of time on the recruiting trail working for Eddie Sutton. He said the talent difference was obvious.

“No one on the (Colgate) roster would get a look from our staff,” Counce said. “You have to admire the way Colgate plays. They can really shoot it.

“The problem is that when you look at them to start the game, you just think it’s going to hard for them to get their shots off against you. You’d think, ‘Surely, we are gong to beat these guys by 30.’ Despite their limitations, they do get off their shots and they can really wear you out from long range.

“We just had to take our intensity up a notch and pressure them more. You could tell their guys were just having trouble getting the ball up against Devo. Even Smith could pressure their ball handlers in the screens.

“I thought Colgate just became terribly fatigued to end both halves. I think their ball handlers were terrified of Devo.”

Notae wreaked havoc, too. In his 31 minutes the Hogs were plus-26 points — plus-10 in the first half and plus-16 in the second half.

“You are living and dying with some of his decisions,” Counce said. “He can go from making an absolutely zero decision to just killing the other team with a stretch of five minutes.

“You set a screen at the top of the key — maybe where the defense thinks he’s not in range — and then he steps back and takes a three. He did that today when they went under the screen on defense. You don’t have a hand up and he launches.

“Both Devo and JD can get a steal on the baseline and taking it the length of the court. They both did that today.

“It’s just pure ability. JD is getting better on defense, too. He had three steals. That’s how good teams win.”

The Hogs are a good team. It makes Counce hunt for a way to get back for the next round of the tournament to watch them play. Arkansas is scheduled to play Texas Tech on Sunday, but a game time and location have not been set.

A member of the Arkansas team which went to the 1978 Final Four, Counce isn’t sure how far these Razorbacks can go in the Big Dance, but he wants to make sure he’s there to see them.