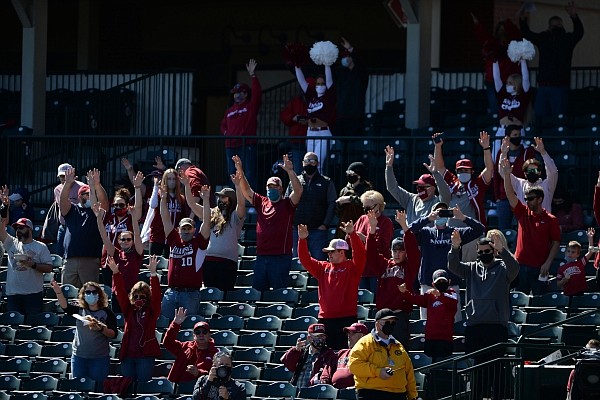 Arkansas Saturday, March 6, 2021, during the inning of the Hogs’ 11-6 win over Murray State at Baum-Walker Stadium in Fayetteville. Visit nwaonline.com/210307Daily/ for the photo gallery.

Alabama used a 10-run 2nd inning to beat No. 1 Arkansas 16-1 on Friday night at Baum-Walker Stadium in Fayetteville.

Arkansas' lone run was scored by Christian Franklin, who hit a solo home run in the 2nd inning.

The bottom of the inning starts with a Christian Franklin infield single. Franklin bounced a ball over the pitchers head, but the ball bounced so high that the short stop couldn't make a throw.

Leach walked then Smith singled to left to load the bases.

Battles strikes out swinging then Gregory hits into a 4-6-3 double play to end the game.

Well when it rains it pours. Tate takes the first pitch he sees in the 9th inning and blasts it over the right field wall.

Wilson singles up the middle, but then is erased after a ground ball to third. Nesbit goes to second for one and then Moore completes the turn to get Eblin at first.

Hawk strikes out looking to end the inning.

The Hogs go in order in the 8th.

Goodheart flied out to left and then Wallace and Nesbit strike out swinging to end the inning.

Evan Taylor is in to pitch for Wicklander

Dylan Leach comes in to catch for Opitz.

Hamiter grounded out to short stop for the first out.

Praytor flies out to deep center. Franklin caught it just a step short of the wall in straight away center.

Gray walks the next batter Williamson on four pitches.

Denton hits a line drive down the left field line for a double. Taylor is getting behind in the count and Alabama's hitters are sitting in the zone.

Diodatti singled to right field, both runners score and Alabama extends its lead.

Pickney goes opposite field and gives Alabama a 15-1 lead. The ball was hit well and landed between the scoreboard and the new building in right field.

Taylor gets out of the inning with a pop up in foul territory by third base.

Shamblin gets the Hogs to go in order.

Gregory flied out to center and Moore lined out to left.

Pickney grounds out to short stop to start the inning. Battles throws a dime on the run for out number one.

Jarvis flied out to left for the second out.

Rose drives a hit over the left field fence for the first runs since the 2nd inning for Alabama.

Wicklander gets Wilson to fly out to left to end the inning.

Wicklander had set down 13 straight batters before the home run.

Ras' day is done. Connor Shamblin is in to pitch for the Crimson Tide.

Wallace flies out just short of the warning track for out number one.

Jacob Nesbit gets just his second hit of the year, with a ground ball that sneaks between the shortstop and third baseman. Franklin continues his hot hitting for the day as he hits a ball off the end of the bat into right field. Hogs have runners on first and second with 1 out.

Opitz hits a 2-0 pitch into straight away center field. The center fielder catches it, but Nesbit advances to third.

Smith flies out down the left field line in foul territory for out number three.

Williamson hit a line shot right at Jalen Battles, Denton popped up to Franklin in center and Diodati grounded out to Moore to end the inning.

Gregory swings at the first pitch he sees and flies out to left.

Ras walks Robert Moore and gives the Hogs their 6th baserunner of the game.

Ras gets Goodheart to hit a one hopper right back to him on the mound. He turns and throws to second for one and then over to first for the double play.

Jacob Nesbit comes into the game at third. Cullen Smith shifts over to first and Brady Slavens comes out of the game for the Hogs.

Wicklander works a 1,2,3 inning for the second inning in a row.

He gets a flyout to left, a strike out swinging and a groundout to Battles at short to end the half inning.

Brady Slavens works a full count, but grounds out to second to start the inning.

Franklin works a walk after being down in the count 1-2.

Opitz follows with a single. The ball was hit no man's land between the center fielder and the second baseman running out. Runners on first and second with one out.

Smith grounded out to first. The first baseman made a nice play up the line and tagged the base before Smith could get there. Both runners advanced 90 feet.

Battles strikes out swinging on a fastball to end the inning.

Wicklander is starting to settle in. He gets Pickney to strike out swining, Jarvis grounds out to short and then Rose strikes out looking to end the inning. Wicklander with the best balls to strikes ration out of anyone that has pitched for the Razorbacks today.

Alabama's starting pitcher Ras has been keeping the Hogs off balance in the beginning of this game. He got Gregory to strike out looking to start the inning. He then got Moore to ground out to the second baseman for the second out.

Goodheart singles to right, but Wallace strikes out looking to end the inning.

Praytor leads off the inning with a groundout to second.

Wicklander strikes out the next two batters to end the inning.

Brady Slavens grounded out to first and he is not moving well. He had an Alabama batter step on his leg in the last half inning.

Franklin gets the Hogs on the board with a solo shot to right-center field. It didn't look like a really powerful swing, but the ball cleared the fence with plenty of room to spare.

Opitz grounded out to second for out number two.

Cullen Smith pokes a 1-1 pitch into left field for a two-out single.

Battles strikes out looking to end the inning.

Pallette walks the leadoff batter on a full count. He's really struggling to find the strike zone early in this game.

Pallette then allows a hit down the right field line. Another single scores the leadoff batter and Arkansas trails early 1-0.

Pallette then hits the next batter and Alabama has bases loaded with nobody out and Pallette's day is done.

Blake Adams in to pitch for him.

Adams walks the first batter and Alabama gets another run.

Adams walks another batter on a 3-2 count. Arkansas' pitching was a strength of the team in Arlington, but has been a weakness so far today.

Praytor grounds out to Battles at short and the Hogs finally have an out. The Crimson Tide get another run though and lead 4-0.

Drew Williamson doubles and Alabama gets two more runs. The ball was hit to straight away centerfield and was just a few feet short of being a home run.

Diodati homers to right and Arkansas is not looking anything like the number one team in the country. Pitchers are struggling to throw the ball in the zone. The inning started with free passes and now Alabama is hitting the ball all over the park.

Pinckney continues the hot hitting with a single.

Adams finally gets out number two as Jarvis lines out to left field.

An error allows another Alabama runner to score. Cullen Smith made a tough play fielding a grounder, but threw it way up the line and it got by Slavens.

Patrick Wicklander in to pitch now for Arkansas.

Wilson gets an infield single. The ball forced Battles to his right, he fielded it, but couldn't make a throw in time.

Wicklander gets Hamiter to strike out and the inning is finally over.

Arkanas goes in order in the bottom of the inning.

Moore lined out to left.

Goodheart struck out looking on a breaking ball that was a really good pitch and Wallace goes down swinging on high fastball that he tried to check his swing, but he couldn't.

Peyton Pallette works himself into and out of trouble.

He walked two batters with one out, but got a fly out to left and a pop up to Battles at short to end the inning.

Pallette looked like his nerves might have been getting to him a little, but he calmed down and got out of the inning without allowing a run.

Alabama left-handed pitcher Connor Prielipp will miss the series due to an undisclosed medical issue. Prielipp, who is projected by some to be the top overall pick in the 2022 MLB Draft, has not pitched since the Crimson Tide’s season opener and is expected to miss at least two more weeks. Prielipp has not lost a game or allowed an earned run in his college career, and has 43 strikeouts in 26 innings….Alabama has a combined record of 30-4 since the start of the 2020 season, but has not played any SEC competition during that time.

Friday’s game will be the first SEC game for either team since May 2019.

Arkansas has not lost a series to Alabama since the Crimson Tide swept the Razorbacks during Arkansas’ 13-game losing streak to end the 2016 season.