Wright State ousts Arkansas in first round of NCAA Tournament 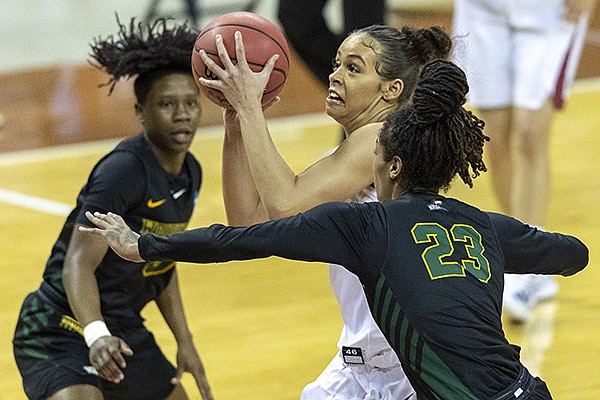 Wright State guard Emani Jefferson, right, defends Arkansas guard Makayla Daniels, left, during the first half of a college basketball game in the first round of the women's NCAA tournament at the Frank Erwin Center in Austin, Texas, Monday, March 22, 2021. (AP Photo/Stephen Spillman)

AUSTIN, Texas — Arkansas came to the NCAA Tournament armed with a seasoned lineup forged in a tough regular season that included wins over UConn and Baylor.

Wright State came with scorer Angel Baker and an attitude that it was time to make history. Baker and the No. 13-seed Raiders did just that.

Baker’s 3-pointer with 29.1 seconds snatched the lead, and Jada Roberson’s two free throws with 8.1 seconds left sealed a 66-62 win over the No. 4 Razorbacks on Monday in the biggest upset of the first two days of the tournament.

“It feels good man,” Baker said. "We made history for our program, for our university ... Definitely feel like we were underestimated. A lot of teams fail to realize numbers don’t mean nothing though, so they probably look at it like an underdog. We stepped up to the challenge.”

Baker averaged 25 points in carrying Wright State to the Horizon League tournament championship and scorched the Razorbacks for 26. Her 3-pointer from the right wing was the fourth lead change in the final two minutes.

The win wasn't sealed until Roberson stepped to the line and made her only two free throw attempts of the game.

Chelsea Dungee scored 27 points for Arkansas (19-9) and gave the Razorbacks the lead at 59-58. But she left in tears as the Raiders closed out the victory and celebrated wildly on their bench at the buzzer.

“They trusted themselves and each other,” Wright State coach Katrina Merriweather said. “We are a driving, rebounding, defending team."

This one had the making of an upset from the start, when the Raiders were the more aggressive and confident team in bolting to a big lead by the end of the first quarter. With Baker leading the way, Wright State then found the late counterpunches to respond as Arkansas rallied from 11 points down in the fourth quarter.

Baker did her work on both ends. She grabbed a critical defensive rebound off an Arkansas miss with 12 seconds left before a foul sent Roberson to the line for the two clinching free throws.

The Raiders' only two previous trips to the tournaments ended in blowout losses.

“Wright State was clearly the better team from tip to buzzer,” Arkansas coach Mike Neighbors said. “We may have taken a one-point lead at some time there in the fourth quarter, but they just put the ball in Baker’s hands and let her make us wrong, which she did a whole bunch.”

Arkansas came to its first tournament since 2015 as one of the best 3-point shooting teams in the country but was just 7 of 22 from long range, including 2 of 12 in the first half. Arkansas was able to rally in large part to 21-of-28 shooting on free throws.

“Today they just didn’t fall," Dungee said. “We rely a lot on shooting the ball well, and that just didn’t happen today.“

BIG ON THE BOARDS

Wright State's aggression had its biggest impact on rebounding, where the Raiders controlled the boards 44-30. Grabbing 15 offensive rebounds led to 14 second-chance points. They also scored 16 points off Arkansas turnovers.

“We can’t get out-shot and out-rebounded and have 15 turnovers," Neighbors said.

Angela Baker canned a 3-pointer with 29.1 seconds left to lead No. 13 seed Wright State to a 66-62 upset of No. 4 Arkansas in the first round of the NCAA women's basketball tournament Monday at the Erwin Center.

Arkansas trailed by as much as 14 points in the first half, but Chelsea Dungee led a rally with 17 second-half points. The Razorbacks led 59-58 on a Dungee 3-point shot at 1:47. Their last lead came on a Marquesha Davis basket from close range with 55 seconds to play.

With the shot clock winding down, Baker took a contested 3-point basket from the right wing to give the Raiders the lead for good. The Raiders added two foul shots with 8.1 seconds to play.

Arkansas (19-9) had one chance at the tying bucket after the Baker bomb. Amber Rameriz drove down the lane against Wright State center Tyler Frierson and her running layup wasn't close with 15 seconds left.

Baker led Wright State (19-7) with 26 points. The Raiders, champs of the Horizon League, advance against the winner of the Missouri State vs. Cal-Davis game set for Monday night.

Arkansas missed its first four shots -- mostly on Chelsea Dungee drives -- to open the fourth quarter as Wright State built a 52-41 lead with 7:45 to play.

The Razorbacks finally answered on a 3-point basket by Maykayla Daniels with 7:42 to play. Arkansas coach Mike Neighbors called timeout after that basket to switch to a fullcourt press.

Wright State has dominated the rebounding. They lead in second-chance points, 12-1. The Raiders hold a 38-22 lead in rebounds.

The Razorbacks cut the lead to 56-55 on Erynn Barnum's layup with 4:12 to play. They had a chance at the lead twice in the next minute.

Tyler Frierson's put-back basket with 2:41 to play gave Wright State a 58-55 lead. They had trailed by as much as 14 points in the first half.

But the Raiders scored the final five points of the third quarter -- all from Angela Baker. Both her baskets came on drives into the lane, including and old-fashioned 3-point play with 1:01 left in the quarter.

Angel Baker hit a 3-pointer with 35 seconds left. Baker scored 18 in the first half to lead the Raiders.

After a strong close to end the first quarter, Wright State dominated early in the second quarter to take a 26-14 lead forcing Arkansas coach Mike Neighbors to call a timeout at the 8:31 mark.

Baker hit a baseline jumper to complete a 6-0 run in less than one minute as the Razorbacks did not make a field goal in the first two minutes of the quarter.

The Raiders used a physical pressure defense and tough rebounding to take control against the higher seeded Razorbacks.

Taylah Thomas converted one of two from the line to pull the Razorbacks to within 26-15 before WSU called timeout.

Amber Rameriz hit a running jumper from 15 feet at the 6:52 mark to end an Arkansas drought of five minutes without a field goal.

Destiny Jackson beat the buzzer at the end of the first quarter with a 25-foot 3-point shot to help Wright State lead 20-12. The Raiders scored the final 7 points of the quarter after Maykayla Daniels hit a 3 to pull the Razorbacks within 13-12.

The Raiders broke on top with a 5-0 lead, but the Razorbacks responded with a 7-0 run after Chelsea scored a basket and two free throws to lead 7-5 at 6:50 of the first quarter.

The Raiders held a 11-9 lead at the first media timeout at the 4:15 mark. The Razorbacks made only 3 of their first 9 shots, but forced three Wright State turnovers.

Dungee led the Razorbacks with 4 points in the first quarter. No Arkansas player made more than one field goal in the slow start.