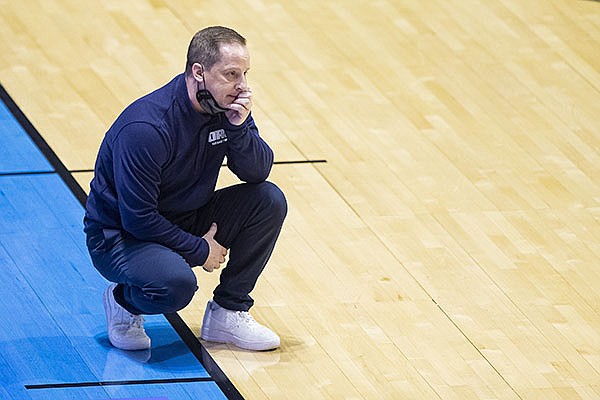 Mike Nail’s final call from the 1994 NCAA basketball championship continues to bounce around in my mind.

"Arkansas completes a dream season!" Nail said as Clint McDaniel dribbled out a 76-72 victory over Duke.

Indeed, there can be nothing more dreamlike than what the Razorbacks did in Charlotte, N.C., at the ’94 Final Four. They rallied in the second half against Arizona and Duke to win the title.

Dreamlike is what most call the Oral Roberts run in the 2021 NCAA tournament — except not even its coach has dreamed past an appearance in the Sweet 16 against the Razorbacks on Saturday night.

"ORU has won two NCAA tournament games in its history," Mills said. "I would love to tie that record.”

Haisten told me last night: “That’s a punchy quote. I’ll use it. But I never dreamed they’d actually pull it off, and now they have.”

The Golden Eagles pulled it off by beating Ohio State in the opener and Florida in the second round. The second-seeded Buckeyes were favored by 17 points.

ORU rallied past Florida for their second victory to tie the school mark set in 1974 when ORU lost to Kansas – blowing a nine-point lead in the final four minutes to lose in overtime – in an Elite Eight game played at Mabee Center.

That loss to Kansas is still the biggest game ever played in the city of Tulsa. It was a bizarre weekend. ORU coach Ken Trickey was ticketed for DUI while celebrating a first-round victory over Creighton, coached by Eddie Sutton.

Trickey resigned, was reinstated by school president Oral Roberts and then resigned after the loss to KU.

Ted Owens was the Kansas coach then and a friendship made with Oral Roberts that weekend would later be the spark that brought him back to Mabee Center as ORU's head coach.

The Owens hiring was also part of a bizarre two-week period as a Tulsa World basketball writer. The paper didn’t have beats, so I covered ORU along with Tulsa, Arkansas, Oklahoma State, Oklahoma and Oklahoma City.

Some of my dealings with ORU were well past bizarre. I wrote the story when basketball coach Ken Hayes was fired one week before Christmas, on his daughter’s birthday, in 1982. It came after a loss to Nolan Richardson-coached Tulsa.

It prompted my one-and-only interview with Bobby Knight, delighted to blast ORU and its president. The idea that a Christian school would fire a coach — and a good one — at Christmas was easy fodder for Knight. I learned some new ways profanity could be strung together.

Just a few years later there was an offer of a new position at ORU by Larry Cochell, the athletic director and baseball coach. He wanted to concentrate on baseball. I’d be the associate AD in charge of basketball.

I turned it down when he explained the school would deduct a tithe from my paycheck to the church, then led by Richard Roberts.

Soon after that I was challenged by Richard Roberts to reveal my source when I broke the story that Owens would be ORU's new basketball coach. As I covered a baseball game on the ORU campus, Richard Roberts demanded that I come to his booth in the press box. The two of us met for five minutes, most of it with his hands on my shoulders with our faces six inches apart.

The meeting — pure intimidation — began with a question from him: “Are you a Christian? Tell me who your source is in my office. I promise not to fire them.”

I wouldn’t budge. He was furious, declaring, “Christians don’t keep secrets,” and banned me from campus.

Obviously, there were no cell phones. I went to the office and phoned Bill Connors, the newspaper’s sports editor and a close friend of Oral Roberts. I soon received a phone call from Oral Roberts with an apology.

“You provide great coverage for our school,” Oral Roberts said. “You are always welcome on our campus. No one will do anything but welcome you going forward. I’m so sorry my son did that to you. He has been reprimanded as only a father can.”

And, it was as if nothing had ever happened. Owens became one of my favorite interviews. The Kansas legend – with two Final Fours – taught me basketball and loved taking me to lunch.

Bill Brogden, then the ORU golf coach, became one of my best friends. I played tournaments with Brogden at his south Tulsa country club. Lanny Endicott, the ORU cross country coach, served with me as deacon at Southern Hills Baptist Church.

I never heard one good thing about Richard Roberts from that point forward. Eventually, he was removed as president and has no affiliation with the school named for his father. His was a sad and predictable demise.

The strength of the athletic program has always been the baseball program. It’s not what it was under Cochell, but the Hogs can almost count on seeing the Golden Eagles when they play host to baseball regionals at Baum-Walker Stadium.

The basketball program is a good fit in the Summit League, but has rarely threatened to make the NCAA tournament until winning the league tournament this season.

ORU is riding a seven-game winning streak that includes winning the Summit title and wins over Ohio State and Florida. But in its last 180 games, ORU’s basketball record is 73-107. During that time, ORU was 34-46 against Summit teams.

This team is different. Mills, trained by Baylor coach Scott Drew, is a terrific coach. Obviously, his team is on a roll. He has wonderful shooters. They are deadly at the foul line and on three-pointers.

ORU leads the nation with 11.2 made three-point field goals per game.

Point guard Max Abmas is good with the ball and is prepared for a 40-minute battle with the Hogs. He has played every minute of 17 games this season.

Center Kevin Obanor, 6-8 and mobile, has become a 40-minute man like Abmas of late. Both have played every minute of ORU’s two NCAA Tournament games. Obanor was a cross country runner in high school.

The challenge for Arkansas is to stop Abmas and Obanor on the pick and roll. Ohio State and Florida did not.

If the Hogs – favored by 11 points — do not, the ORU coach will beat his dream and join Trickey as Elite Eight coaches at ORU.

It sounds more bizarre than dreamlike. But to me, everything about ORU basketball has always bordered on bizarre.