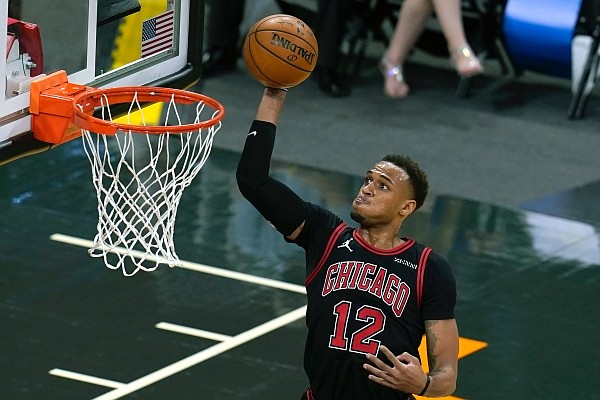 Chicago Bulls forward Daniel Gafford (12) attempts a shot during the first half of a game against the Orlando Magic on Saturday, Feb. 6, 2021, in Orlando, Fla. (AP Photo/John Raoux)

In the first trade deadline with executives Arturas Karniosvas and Marc Eversley leading the front office, the Bulls have acted aggressively to upgrade their roster. They found an All-Star in the front court to pair with guard Zach LaVine and, perhaps, signaled to the rest of the league their intentions to try and win after years of toiling through a rebuild.

Vucevic is having the best season of his career, averaging 24.5 points, 11.8 rebounds and 3.8 assists while shooting 48% from the field and 40.6% from 3 for Orlando. He can space the floor, excels in the pick-and-roll (or pop) and can punish smaller defenders in the paint. The 30-year-old arrives in Chicago with two additional seasons remaining on his contract at a reasonable salary.

However, the Bulls did have to pay a significant price to acquire Vucevic.

They moved on from Carter, a lottery pick in 2017 once considered one of their building blocks for the future. But Carter has had an uneven third season in the NBA. Expected to carry a bigger role in the offense this year, his scoring, rebounding and field-goal percentages are down, and he was recently moved out of the starting lineup for the first time in his career.

The Bulls also traded away their first-round pick for the 2021 NBA draft and in 2023, with top four protections, and an expiring contract in Porter — who appeared in 54 games with the Bulls after being acquired at the trade deadline in 2019.

In the deal with the Wizards, the Bulls took a chance on Brown, the No. 15 pick in the 2018 draft, who never got much consistent playing time in Washington. He's a solid wing defender who will be entering the final season of his rookie contract next season, averaging 7.4 points per game while shooting 33% from 3 in his career. Wagner is another floor-spacing big man, but he has struggled with his shot in his career, shooting about 30% from beyond the arc in his career.

They will swap roles with Hutchison, who hasn't played since Feb. 5 for personal reasons, and Gafford, who had fallen out of favor in the rotation after his struggles in the first half.

The reality for the Bulls, however, that became more clear with each passing game, is that this team was going to need an overhaul. Since taking over last spring, Karnisovas had kept the roster largely intact, upgrading the coach to Billy Donovan and evaluating the players on a more level playing field. The Bulls looked like a much more competitive team in the first half, but those few bright spots have faded with heightened expectations.

The Bulls are 19-24, which slots them in the final spot in the play-in tournament as the No. 10 seed in the Eastern Conference. But the Bulls haven't beaten a team over .500 in more than two more months and the gap between them and the rest of the league is apparent. Since the All-Star break, the Bulls have dropped six of their past nine games.

On Thursday, the Bulls began taking steps to move on from their current trajectory and start reshaping the team with the vision of their new regime. There's a chance the Bulls aren't done. They have been in the market for a point guard, connected to Lonzo Ball of the New Orleans Pelicans, among others, and have reportedly been willing to listen to offers for forward Lauri Markkanen.