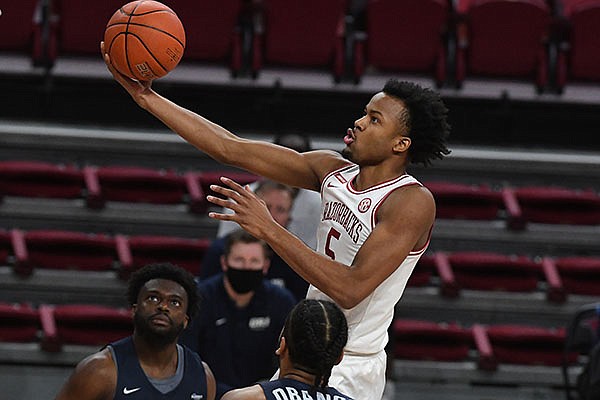 Arkansas guard Moses Moody (5) goes up for a shot during a game against Oral Roberts on Sunday, Dec. 20, 2020, in Fayetteville.

Only in name have the Arkansas Razorbacks and Oral Roberts Golden Eagles already played each other.

The teams that met five days before Christmas have grown, matured and developed an undeniable chemistry.

Our man Bob Holt had a great story on the turning point of this season for the Razorbacks in Wednesday’s paper. How after a 92-76 loss to LSU, Eric Musselman worked their Hogs off.

During what Musselman said was the toughest practice he had ever run, the players saw what everyone was made of and they survived it together.

It was the beginning of trust of each other and a determination to pay more attention to the coaching.

After the Golden Eagles lost to the Razorbacks 87-76, their record was 3-5.

The other losses were to Missouri, Wichita State, Oklahoma State and Oklahoma.

All five were NCAA Tournament teams.

In November and December, Oral Roberts Coach Paul Mills was preparing his team for March.

The Golden Eagles led the Hogs 40-30 at halftime.

The Razorbacks didn’t just start slow, they were sloppy. If one didn’t know better ,they seemed like a bunch of kids thinking ahead to Christmas.

In the first 20 minutes, Oral Roberts scored 18 points off the Razorbacks’ nine turnovers, seven of which were steals.

Saying the Hogs weren’t protecting the ball would be like saying former President Trump misses the White House.

Arkansas came out for the second half much more prepared, turned the ball over just six times while getting seven steals and 16 points off turnovers.

While they were 7-0, the Hogs were still inconsistent and stayed that way until THE practice in January.

The Golden Eagles were great some nights and definitely not so great others, finishing fourth in the Summit Conference with one chance to keep playing, win their conference tournament — which they did, beating North Dakota, South Dakota State and North Dakota State.

There was nothing on that resume that said the Golden Eagles would shock the nation against Ohio State to open the NCAA Tournament, but they did in overtime.

Usually the better seeded team wins in overtime, but the Buckeyes, No. 7 in the country, couldn’t find an answer in 40 minutes for Kevin Obanor and Max Abmas, who led the nation in scoring this season, averaging 24.5 points per game.

That should have been a clue for Ohio State, but it wasn’t until overtime that it got a handle on Abmas, who scored three points in the extra period.

With the Buckeyes focused on Abmas, Obanor scored seven of his 30 points in overtime and the Golden Eagles prevailed 75-72.

The pair of three-point wins swung a lot of emotion its way.

The Golden Eagles are playing lights out in March, but neither the Buckeyes or the Gators are Arkansas.

Arkansas is an A-D team. When the Razorbacks are on their A game, they are playing D.

They are playing unselfish, hard-nosed basketball, and they are making believers out of a lot of folks who felt the SEC was down this season.

The Big Ten had eight teams get in the tournament, but only one remains, Michigan.

The SEC had six in and two are left. Surprisingly, the Pac-12 has four teams in the Sweet 16.

The Razorbacks making it this far may have been a surprise for some, but it wasn’t to them.

It took a lot of coaching by Musselman, but after that hard practice in January, each player respected the other players for enduring it and they shared the desire not to have to do it again.

Same names, different teams and one will survive and advance.