Shining at the right time: Williams flashing signs of greatness down the stretch 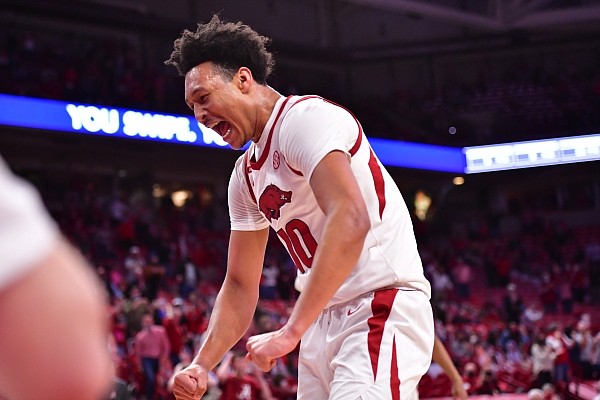 Arkansas forward Jaylin Williams celebrates following a play during a game against Alabama on Feb. 24, 2021, in Bud Walton Arena in Fayetteville.

FAYETTEVILLE — Linda Williams isn’t sure who was smiling more — her or her son, Jaylin, Arkansas’ blossoming freshman forward.

Both in Indianapolis but separated due to the NCAA’s covid-19 protocols, they shared a special few moments together following the Razorbacks’ 68-66 second-round win over Texas Tech. They were ecstatic, almost floating, as they connected on FaceTime.

As a result of cheering during the game and celebrating afterward, Linda had lost much of her voice. Jaylin was spent after collecting 10 key rebounds in a memorable postseason performance, but adrenaline carried him through the rest of the night.

It was a call Linda will never forget.

“I think everybody knows he’s got that baby face and really heartwarming smile,” she said. “I texted him after the game and said, ‘Son, I have over 50 texts and 35 Facebook messages on my phone. I can’t imagine what it’s like for you.’ He said, ‘Mom, it is crazy. It’s so unreal.’

“He was overjoyed, happy and very complimentary of his teammates. He’s just loving it and embracing it all and loving every minute of it.”

His growth and development into one of the Razorbacks’ core pieces — a piece they don’t want to be without again — over the last month-plus has been one of the top storylines of the season. And his play in that stretch indicates he has what it takes to become an Arkansas great.

The freshman had a number of highlight-reel caliber plays against the Red Raiders, but none were more jaw dropping than his three-quarter-court advance pass to Davonte Davis that led to a dunk.

For Linda, she got flashbacks of her son’s youth and his church league baseball days. When he was young, Linda and Michael, Jaylin’s father, believed baseball might be Jaylin’s sport of choice.

They had good reason to think that. Within his first two years in the church league, he had hit 16 home runs.

“Somebody said something to me about (his pass) at the hotel and said that was impressive,” Linda said. “Jaylin played baseball. He gets that back from when he played first base and third base.

The Gatorade player of the year in Arkansas as a senior at Fort Smith Northside, Jaylin was the guy as his prep career wore on. He averaged 18.7 points, 12.2 rebounds, 2.7 assists and 2.5 blocks per game in his final season, and he won a state championship his junior year.

His Razorbacks career, though, did not begin as he and many others envisioned. In Arkansas’ first nine games, he saw the floor only 9.1 minutes per game and did not play against North Texas or in the Dec. 20 meeting with Oral Roberts.

He then played 14 or more minutes in six consecutive games and earned the first two starts of his career in losses to Tennessee and Alabama. But to end January and open February, his role diminished again — partly due to injury — and he did not play more than nine minutes over a four-game stretch.

The freshman did not check out, though, at any point. Arkansas was winning, and he was happy, but deep down he wanted to play a role in the success, so he continued to grind.

“My work stayed consistent,” Jaylin said Tuesday. “I was getting in the gym every day working out. Practice would come and I’d go hard just like everybody else. I was making sure we’re all still playing hard. Don’t get satisfied with the wins.

“After practice, I stayed and worked out. My work stayed consistent, and when I got my opportunity to get on the court I was able to show it.”

After recovering from a knee bruise, he came into his own. He has always shined at the right time, Linda said. She and Michael encouraged him to stay the course, and he did. His mental toughness kept him sharp and present in the moment.

Jaylin began to thrive during a challenging five-game stretch in February against four teams that earned NCAA Tournament bids, averaging 7.6 points and 6.8 rebounds.

He added a career-high 13 points and eight rebounds in the upset win over then-No. 6 Alabama and flashed the personality and crooked smile fans have come to love.

The next time out, he pitched in 8 points, 6 rebounds, 4 blocks and 2 steals in the home win over LSU. His role in the Razorbacks’ rotation was set.

“I think Jaylin has a real, sincere desire to have a purpose,” Linda said. “He and I have had that talk. He said, ‘My biggest fear in life is to not have a purpose.’ That was kind of a strange thing to hear from a 16-year-old kid that he just wants to be able to leave this world with a purpose.

“But I think that’s what is inside of him. It’s special. And it’s the drive to prove people wrong. It’s incredible.”

Graduate-transfer guard Jalen Tate, the only Razorback with NCAA Tournament experience prior to this season, has enjoyed watching the freshman’s growth firsthand.

He and Indiana transfer Justin Smith credited the 10-rebound effort against Texas Tech as a primary reason Arkansas advanced to its first Sweet 16 since 1996. Jaylin made only one free throw, but he accounted for four other critical scores thanks to his vision.

And through two rounds of the tournament, opponents are 2 of 8 from the floor inside the arc with him as the nearest Razorbacks defender.

JD Notae, the Razorbacks’ quick-strike scorer off the bench, is a Jaylin Williams fan as a teammate. He is always happy, smiling and laughing.

Linda is often asked if she gets nervous before or during games. Her answer is no. She becomes more excited than anything. Any nerves she might have ahead of tipoff are set aside because of Jaylin, whose on-court demeanor is a perfect blend of his mother and father.

In her playing days, Linda dove into bleachers and scratched and clawed for loose balls. Michael was a great athlete, too, calm and collected.

“I know Jaylin, and in whatever he wanted to do he was going to work hard to get there. I’m still in awe,” she said. “When I see him out there doing what he does and I see his stats, it’s still like, ‘That’s my kid. That’s my son.’