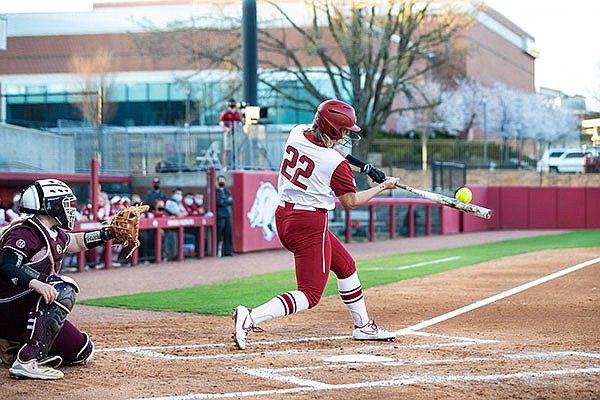 Arkansas' Linnie Malkin (22) hits a home run during a game against Mississippi State on Friday, March 26, 2021, in Fayetteville. (Photo by David Beach/Special to the Democrat-Gazette)

FAYETTEVILLE — No. 15 Arkansas didn’t have much offense Friday night, but Mary Haff and Autumn Storms made sure it was enough to give Razorbacks softball Coach Courtney Deifel her 200th career victory.

Linnie Malkin broke up Annie Willis’ no-hitter with a two-out, two-run home run in the fourth inning and Arkansas pitchers made it stand up for a 2-0 victory over Mississippi State at Bogle Park.

Arkansas (26-3, 7-0 SEC) continued its best start in conference play, but Deifel didn’t even know about the milestone victory until assistant coach Matt Meuchel told her after the game.

“We always shake hands after we win, and Matt got me first and he was like, ‘Congratulations,’ ” Deifel said. “I was like, ‘Thanks. Why are you so serious today?’ So he told me in that moment, so that was pretty cool and the staff was all on it. It’s a pretty awesome team to get to share that with.”

Malkin, a junior from Broomfield, Colo., made an adjustment in her second at-bat since Willis was focusing on the inner half of the plate against right-handed hitters and it worked perfectly. She took a strike on an outside pitch, but jumped the next inside pitch, depositing it into the parking lot across the street for her 11th home run of the season.

“I was looking for the inside pitch,” Malkin said. “I knew anything out I wasn’t going to swing at. Obviously inside is more my strong suit, so I wanted to look for that. It was my perfect pitch, I would say. It was one of my best swings I think. It felt really, really good. I was happy. I was excited.”

The Razorbacks’ only other hit was an infield single by Sam Torres leading off the bottom of the sixth. But Haff and Storms kept the Bulldogs’ offensive woes going in SEC play.

Mississippi State (15-12, 0-7) has now lost seven consecutive games and scored only one run in conference play. The Bulldogs haven’t scored a run for 37 consecutive innings in SEC play.

Haff and Storms combined on a four-hitter. Haff (16-2) allowed no runs on four hits over 5 2/3 innings. She struck out four, walked one and hit a batter. Storms got the final four outs for her second save.

The Bulldogs put two on with two out in the sixth, but Storms got the final out to put out the fire. She retired the six in order in the seventh.

Deifel said the Razorbacks did what they needed to do to win. She praised Hannah McEwen’s lead-off walk in the fourth before Malkin’s home run.

“However you figure out a way to be one up,” Deifel said. “Whatever it takes. Linnie’s home run was massive in many ways. I thought Willis threw a really great game. I’m glad that Mary and Autumn and our defense did a great job. It takes all kinds. Wins look really different.

“But today our pitching and defense kept us in the game to give us a chance and in that inning there was a momentum shift with Hannah McEwen’s at-bat. It was just a shift our team needed after that first time through the lineup.

“If you look back at the first three innings, she kind of ran it right through us. It was minimal pitches. We didn’t look all that competitive against her. So then Hannah digs in and has the at-bat she did. I think it’s underrated what Hannah does for us in that lead-off spot, and she did it in that moment.”

The teams square off in second game of the three-game series at 1 p.m. today at Bogle Park.