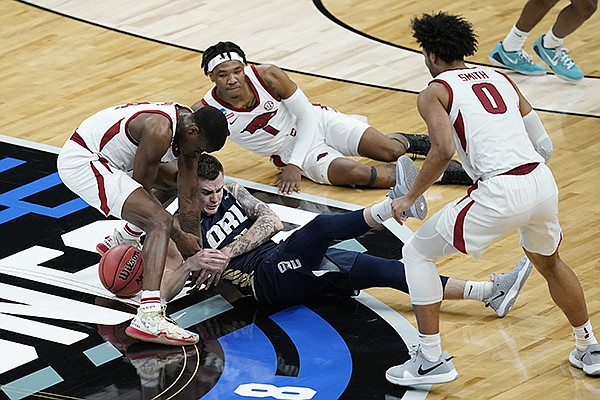 Oral Roberts did not look, and certainly didn’t play like, a No. 15 seed.

Leading No. 3 seed Arkansas by seven at the half, the Golden Eagles were outrebounded by 12 in the second half and made 2 of 14 threes to find themselves tied at 70-70 with 31 seconds to play.

Jalen Tate ran the clock down to nine seconds when the Razorback burst into their offense. Tate looked at Moses Moody, who was covered. He then made a perfect pass to Davonte “Devo” Davis, who was double-teamed.

Davis made a hard step to his left and lofted an 8-foot jumper with three seconds to play that was all net, and a three-pointer by ORU banged off the rim to send the Razorbacks on their way to the Elite Eight with a 72-70 win.

It was the 10th time this season the Razorbacks have overcome a double-digit deficit. The Hogs trailed 46-34 early in the second half.

Davis, the freshman from Jacksonville, made Arkansas’ first and last shots of the second half, scoring 14 of his 16 points in the final 20 minutes.

He opened the second half with three consecutive field goals. Moody then got back-to-back baskets, including a three-point play, to cut the ORU lead to 48-41 going into a TV timeout with 14:51 left.

Justin Smith got a layup, and Davis grabbed an offensive board and drained a 14-footer to tie it at 58-58.

Oral Roberts tied it at 70-70 with 31 seconds to play, setting up Davis’ heroics.

Arkansas couldn’t have opened the game colder if the game was played outdoors at the Arctic Circle, and it trailed 35-28 at intermission.

Only Tate was better than 50% from the floor, and he was 4 of 7 and led the Razorbacks in scoring with 10 first-half points.

Their perimeter defense in the first eight minutes allowed ORU to make five consecutive threes. When the Razorbacks picked up the pace, ORU drove to the basket and got five more field goals that were mostly uncontested.

Eric Musselman started a big lineup, but after five minutes opted for a smaller, quicker lineup. They went on a 10-0 run to take a two-point lead, and then it was a back-and-forth battle until Max Abmas scored six unanswered points while Arkansas was suffering through a 2-of-10 shooting drought.

It was a great effort by two well-coached, determined and gritty teams. No one who started watching the game willingly changed the channel.

Arkansas did shoot a little better in the second half, but it wasn’t until the Razorbacks challenged the passing lanes, tightened up their perimeter defense and protected the ball did they outplay the Golden Eagles, who were trying to become the first No. 15 seed to make the Elite Eight.

The Razorbacks had seven steals and forced a total of 13 turnovers that they converted into 19 points. They also were 13 of 15 from the free-throw line.

This will be the Hogs’ first Elite Eight appearance since 1995, when they finished runner-up to UCLA.

Nolan Richardson used to say he liked a game that was ugly. This one was close enough as both fought hard from start to finish.