Razorbacks improve to 8-0 in conference games 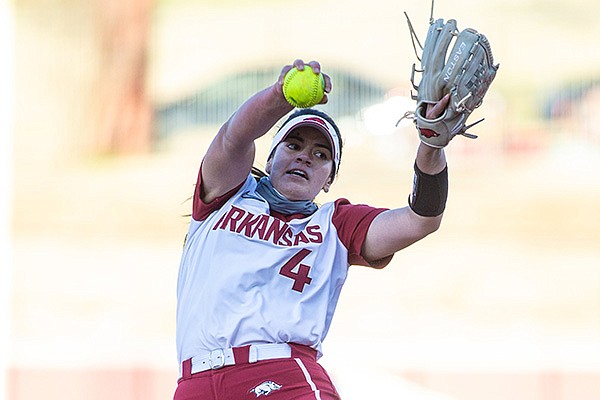 Arkansas pitcher Mary Haff throws during a game against Mississippi State on Friday, March 26, 2021, in Fayetteville. (Photo by David Beach/Special to the Democrat-Gazette)

FAYETTEVILLE — Mary Haff has been the ace of No. 15 Arkansas’ pitching staff this season. She was the closer on Saturday afternoon.

The junior, who leads the country in wins and innings pitched, came in to slam the door in the Razorbacks’ 8-7 victory over Mississippi State at Bogle Park.

Arkansas improved to 27-3 overall and sits atop the SEC standings with a program-best 8-0 start. But it was far from easy.

The Razorbacks rallied from deficits of 4-0 and 6-2 to grab the lead, but needed some big outs from Haff — who earned her 16th win on Friday — to seal the deal.

She entered the game with Arkansas clinging to a one-run lead in the top of the sixth inning. Mississippi State had runners at second and third with only one out.

Haff got Bulldogs’ first baseman Fa Leilua on an infield pop-up for the second out. Arkansas Coach Courtney Deifel elected to intentionally walk cleanup hitter Mia Davidson, who had homered earlier, to load the bases. Haff struck out Carter Spexarth looking to end the threat.

She came back to retire Mississippi State (15-13, 0-8) in order in the seventh for her third save of the season and help the Razorbacks to their seventh consecutive win.

Haff understood the situation, and she focused specifically on Leilua, the Bulldogs’ three-hole hitter and a former All-American.

“I wasn’t focused on the runners, what the score was,” Haff said. “And if I could get this girl, the rest I felt pretty comfortable with. Getting her out was huge. It really was just me focusing on one batter at a time and trying not to make the moment bigger than what it was.”

Deifel said it’s all hands on deck in SEC games, so Haff knows she could be called on in games she doesn’t start.

“Mary knows the situation, which she would go in and close for us and we had worked ourself into that scenario,” Deifel said. “It’s always nice to be able to hand her the ball at the end and close the door for us.”

Arkansas roared back to tie the game 6-6 with a four-run bottom of the third, then took the lead for good with two in the fourth.

Linnie Malkin’s 12th home run of the season gave Arkansas a 7-6 lead, and Sam Torres’ bloop single drove in Keely Huffine with two outs with what proved to be the game-winner.

Freshman Jenna Bloom (6-1) picked up the win in relief for the Razorbacks. She allowed 1 run on 3 hits over 2 2/3 innings, while striking out 1 and not walking a batter. The right-hander threw a pair of scoreless innings to give the Razorbacks a chance to rally, but gave way to Haff after giving up a run in the sixth.

Deifel was especially pleased with how the Razorbacks put aside a horrible start to find a way to win.

“That’s the biggest thing that I’m proud of them for,” she said. “I think teams in the past, I think teams that have less belief in themselves and each other would have folded in that situation. It was very uncharacteristic of us. There were two errors on the board. I feel like there was probably five.

“But it’s not who we are and their ability to just move forward and continue to fight to get back in it. I thought it was incredibly resilient. I know I tell you this all the time, but this team doesn’t flinch.”

Malkin went 3 for 4 while Torres added 2 hits and 3 RBI to pace the offense. But Deifel praised the bottom of the lineup for some great at-bats that led to runs. Lauren Graves and Nicole Duncan both drew bases-loaded walks in the four-run third. Pinch-hitter Rylin Hedgecock also contributed an RBI single in the second.

Leilua and Brylie St. Clair had two hits each to pace the Bulldogs’ 10-hit attack. The Bulldogs snapped a streak of 37 consecutive scoreless innings in the top of the first, but have now lost eight in a row.

Arkansas will be looking for the series sweep today. First pitch is scheduled for 1 p.m.