Sills an unsung hero as Hogs move on to Elite Eight 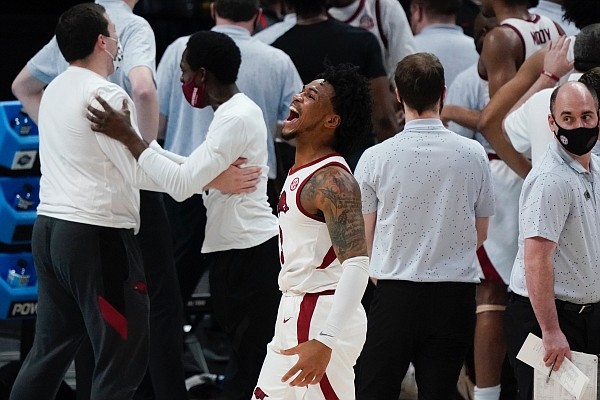 Walking alongside teammates Saturday in the tunnels leading to the Arkansas locker room in Bankers Life Fieldhouse, Desi Sills let out the kind of celebratory yell you might hear from a player who knocked down a game-winning shot.

Sills did not do that against 15-seed Oral Roberts in the Sweet 16. That moment belonged to freshman guard Davonte Davis.

Sills, a Jonesboro native, was basking in the Razorbacks’ team success after a 72-70 win that pushed the program into the Elite Eight for the first time in 26 years. He was overjoyed to have played a key role.

Sills was an unsung hero for Arkansas.

“Desi gave us a great lift,” Razorbacks coach Eric Musselman said Sunday. “JD (Notae), we felt like he was struggling and pressing too much, so the next man up was Desi. He came in and he played a really solid team game.

“He got to the basket, missed a layup, but by him drawing an extra defender over off his dribble penetration, it allowed Justin Smith to get an easy putback. His pressure on the rim off the dribble drive I thought helped us, which correlates with his assists.

“We ran a couple of plays for him offensively in an isolation situation when (Max) Abmas had three fouls, and he made the right reads and didn’t force things.”

Sills finished the game with 2 points on 1 of 4 shooting, including 1 of 3 inside the three-point line, 6 defensive rebounds and 4 assists to go with 2 steals. He played 28 minutes as well, more than in the Razorbacks’ previous three games combined.

The six defensive rebounds matched a season high and were as many as he had grabbed in his last nine outings. At 6-2 and 6-3, respectively, Sills and Davis each tallied a team-high six rebounds off Oral Roberts misses.

“Desi provided really good bench minutes, but we didn't get much out of our bench other than Desi coming in,” Musselman said. “Desi did a good job defensively, and he did a good job rebounding the basketball as well for his position.”

Sills somewhat quietly recorded the four assists against the Golden Eagles, his most in a game since he had four at Vanderbilt on Jan. 23. He was one off a season high set against Southern in early December.

His assists led to nine Arkansas points and were spread among four teammates — Notae, Smith, Jalen Tate and Moses Moody. Tate’s score was the Razorbacks’ only made three-pointer in the win.

In addition to his largely non-scoring contributions offensively, Sills was a defensive plus. Arkansas outscored Oral Roberts by 11 points (56-45) in his 28 minutes in the lineup, and his two steals tied a team high.

Through Arkansas’ three NCAA Tournament games, it allowed 0.77 points per possession in Sills’ 56 defensive possessions, according to HoopLens analytics. Opponents turned the ball over on 28.6% of those possessions.

Musselman added that it is great for him to be able to turn to a player like Sills, who has prior starting and big-game experience with the Razorbacks, at a pivotal time like Saturday.

Davis said Sills is a player he looks up to. When he needs questions answered by a teammate, he turns to the junior guard, and Sills is there for him. It speaks volumes to his mental makeup given his role was altered down the stretch of the season.

“He’s a great teammate,” Davis said of Sills. “He was here last year, so he knows what Coach Muss expects. He played really well.

“He contributed going down the stretch, and I know for sure when it comes to big-time moments like that he’s going to always be ready.”