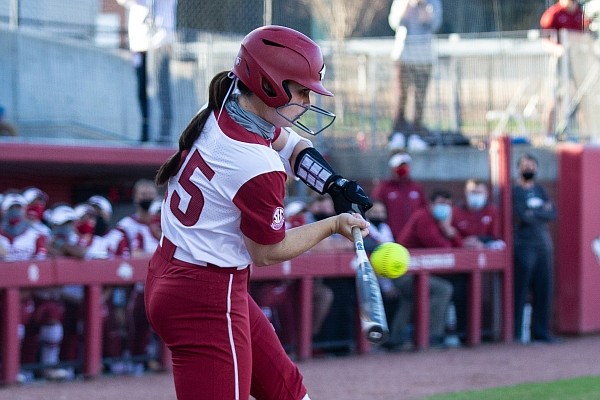 Arkansas senior Braxton Burnside (25) connects with a ball against Mississippi at Bogle Park at the University of Arkansas in Fayetteville.

FAYETTEVILLE — Braxton Burnside broke out of a recent slump in a big way to help No. 15 Arkansas finish off a three-game sweep Sunday afternoon in Bogle Park.

The fifth-year senior from Paragould hit her 17th home run of the season, a two-run shot, to snap a 2-2 tie in a 4-3 victory over Mississippi State.

The University of Arkansas (28-3, 9-0 SEC) remains atop the SEC standings amid the program’s best start ever. The Razorbacks now have won eight in a row and 27 of their last 28 games.

Hannah McEwen’s two-out double gave Burnside a chance in the fifth inning. She was hitless in seven previous at-bats against the Bulldogs until she connected on a 3-2 pitch off Mississippi State starter Annie Willis (7-4). It gave Arkansas a 4-2 lead and proved to be the difference.

She took a called strike on the inside corner on the previous pitch, but jumped on a curveball that caught a little too much of the plate.

“The other part of the issue is just fouling the good pitches off instead of capitalizing on them. Getting myself down in the count and fouling them off instead of squaring them up, which is just a tiny adjustment. But I think that last at-bat I was finally able to get a good pitch and put a good swing on it and just put those two together.”

The Razorbacks shortstop also tied Nicole Schroeder for the single-season school record for home runs. Putting her name in the record book at Arkansas is special, but the team’s success is the main thing, Burnside said.

“It absolutely means the world to me … I would not want to be anywhere else,” she added. “This being my home state, I just think it means a little bit more that I’m able to represent Arkansas and represent my little hometown Paragould in northeast Arkansas.

“Just kind of more settled in, and so you just felt like she was really on the verge of doing something special,” Deifel said. “That was huge for the game, but also for her and hitting that 17.”

Mississippi State (15-14, 0-9) pulled within 4-3 on Mia Davidson’s solo home run in the sixth, but junior Mary Haff slammed the door on the Bulldogs the rest of the way.

Haff improved to 17-2 in the circle and put an exclamation point on a big weekend. She sandwiched a save between two victories for the Razorbacks. Haff, who leads the country in victories and innings pitched, allowed 3 runs on 4 hits, struck out 9 and walked 2 in the complete-game effort.

She relied more on her curveball and kept the Bulldogs off balance most of the day.

“Today, I thought Mary’s outing was just absolute toughness,” Deifel said. “Especially when they obviously saw her on Friday. They saw a little bit of her [Saturday], and to go back out there [Sunday] and just kind of give them a completely different look, to be honest.

“We relied on pitches that she doesn’t throw a ton. I think it caught them a little off guard, and for her to just stay the course and fight, I’m just really proud of her. Her toughness right now is just off the charts.”

The Razorbacks hit the road later this week, beginning a three-game SEC series at Auburn on Thursday. The Tigers (19-8, 1-5) shut out Missouri 3-0 for their first SEC win on Sunday.