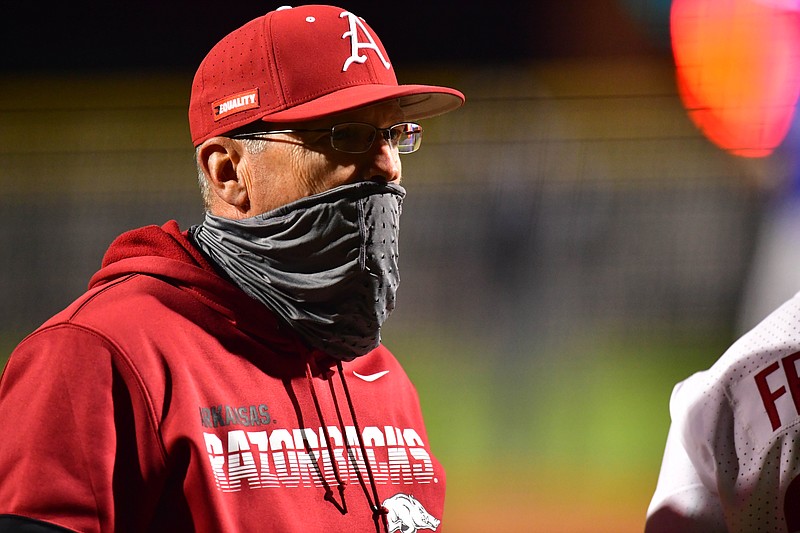 FAYETTEVILLE — Robert Moore hit for the cycle and Arkansas belted five home runs during a 21-8 victory over Central Arkansas on Tuesday at Baum-Walker Stadium.

It was the first meeting between the programs since 1948.

Moore completed the cycle with a sixth-inning double. He finished the game 4 for 4 and also reached base with a walk and a hit by pitch. He recorded a career-high 6 RBI.

He was the first Arkansas player to hit for the cycle since Kyle Harris in 1994.

UCA (9-12) scored a run in each of the first three innings against Arkansas starter Kole Ramage, who earned his first win with a four-inning start. Ramage (1-1) allowed 5 hits, walked 1 and had 2 strikeouts.

Arkansas took a 6-3 lead on a pair of home runs by Charlie Welch and Jalen Battles in the third inning, and broke the game open with its first of two seven-run innings in the fourth.

Catcher Dylan Leach hit his first career home run to lead off the bottom of the fourth inning, and Arkansas’ first six batters reached base in the inning. Brady Slavens had a two-run triple in the inning and Battles hit his second two-run home run.

Kolby Johnson’s three-run double pulled the Bears within 13-7 in the top of the fifth inning before Moore hit a solo homer off the video scoreboard in right-center field in the bottom of the fifth.

The Razorbacks tacked on seven more runs in the sixth, including three runs on Moore’s double to the wall in right field that sealed the cycle.

Neither team scored in the final three innings.

Tuesday's game was the first in a six-game homestand for the Razorbacks, who are scheduled to host Auburn in the first game of a three-game series Thursday at 6:30 p.m.

Starks finishes it off in style wit a strikeout.

We head to the ninth inning. Arkansas has 21 runs on 20 hits.

Robert Moore is 4-for-4, has hit for the cycle, been hit by a pitch and has six RBIs.

Jalen Battles is 3-for-5 with two homers and four RBIs. Matt Goodheart is also 3-of-5 and Dylan Leach 2-for-5.

Gabriel Starks in to pitch for the Razorbacks.

Robert Moore was hit by a pitch (is that a cycle-plus?) and Matt Goodheart singled with two outs, but Arkansas couldn't add to its lead.

Evan Taylor came into pitch for the Razorbacks and worked around a single and an error without allowing a run.

Zach Gregory's bases-loaded walk forced in Christian Franklin, whose single was Arkansas' 14th hit of the night. Franklin moved up on an a fielder's choice and an error.

Dylan Leach's free pass plated another and Robert Moore then cleared the bases with a double.

Moore's double means he as now it for the cycle and he has six RBIs.

AJ Mendolia gets is third hit and third RBI of the night to cut his team's deficit to six.

Robert Moore homers for Arkansas' fifth of the night.

Caleb Bolden takes over on the mound for Arkansas.

Ryan Johnson delivers a bases-clearing double to cut it to 13-7.

Trust then fans RJ Pearson to escape without further damaage.

Balls are flying out of Baum-Walker Stadium left and right now. Dylan Leach's homer off new pitcher Andrew Shoultz hits off the new building beyond the right field fence. |

Shoultz is done for the night as the UCA bullpen door opens again for Brad Veral.

Arkansas scored seven runs on seven hits and one error.

Kole Ramage with his best inning of the night - 3 up, 3 down. He's allowed five hits, three runs (all earned), fanned two and walked one.

Charlie Welch seemed mad at the baseball Janek was throwing. His blast quickly unties it.

Jalen Battles also leaves the yard with a two-run, two-out homer that scores Christian Franklin, who had walked with one out.

Janek got his first two outs in easy fashion, but then Zach Gregory singled, Dylan Leach doubled him to third and Robert Moore tripled both home.

Matt Goodheart grounded out to end the frame.

AJ Mendolia and Drew Sturgeon both singled to lead off the inning with Sturgeon's coming via the bunt. Cody Johnson bunted both over and Connor Flagg plated Mendolia on a groundout.

Brady Slavens welcomes reliever Dillan Janek with a run-scoring sacrifice fly, but Janek gets Christian Franklin to hit into a double play to limit the damage.

Ramage is greeted by Connor Emmet with a lead off home run, but sets the next three down in order.

It is a cloudy, overcast night and there is a chance for showers and thunderstorms during the game.

Arkansas (19-3) has a few lineup changes tonight that are not uncommon for a midweek game. Among them: Charlie Welch will DH, Ethan Bates will play third base, Zack Gregory will play in left field and Dylan Leach will catch. Matt Goodheart is also playing in the first tonight at first base and Brady Slavens will play in right field.

This will be the first meeting between Arkansas and UCA since 1948.