Persistence pays off for Moore 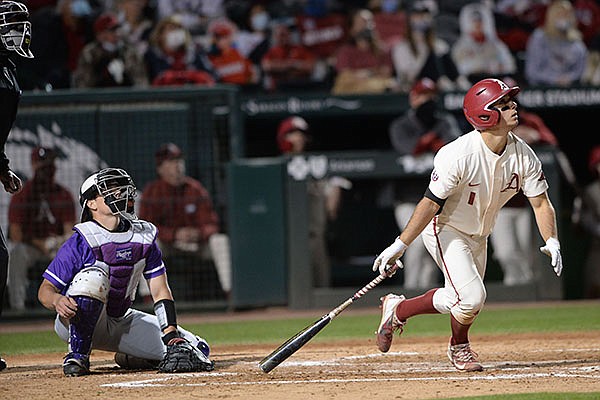 Arkansas second baseman Robert Moore watches Tuesday, March 30, 2021, as the ball hits the scoreboard for a solo home run during the fifth inning of play against Central Arkansas in Baum-Walker Stadium in Fayetteville.

Noted Razorback fan and country music star Carrie Underwoood once had a hit song in which she asked Jesus to take the wheel.

It turns out Arkansas sophomore second baseman Robert Moore, needing only a double to hit for the cycle against visiting Central Arkansas, asked Jesus to take the bat on Tuesday night.

Moore then lashed a two-strike, three-run double in the sixth inning. It was part of a 4 for 4, 6 RBI night for Moore during the Razorbacks' 21-8 victory over UCA.

“Yeah, I had an idea,” Moore said of what he needed for the cycle. “Walking up to the plate, I just said, ‘God, if this is your will, let it happen. If not, let me glorify you through the good and the bad.' So I got a pitch with two strikes that I could handle, it just kept fair and I can’t describe the happiness. It was very genuine.”

Moore’s cycle was first for Arkansas (20-3) since Kyle Harris in 1994 during a game at Tennessee.

“Probably one of the coolest experiences I’ve ever had playing this game and one of the most fun and exciting experiences,” Moore said. “The coolest part was just celebrating with my coaches and my teammates at the end of this, and just getting the hugs from (Arkansas hitting coach Nate) Thompson and my teammates. That was probably the most enjoyable part.”

Moore walked in the first inning, tripled in a pair of runs in the second, singled in the fourth, hit a solo homer in the fifth, had the bases-clearing double in the sixth and was hit by a pitch in the seventh.

His big night at the plate came during a game when Arkansas hit five home runs, had a pair of seven-run innings and recorded a season-high 20 hits in its first game against UCA (9-12) since 1948.

The five homers — two by Jalen Battles and one apiece from Moore, Charlie Welch and Dylan Leach - gave the Razorbacks the NCAA lead with 45 home runs this season.

“Well, obviously it was a great day at the plate,” Arkansas coach Dave Van Horn said. “Not only did he hit for the cycle, but I like it that he drove in six runs. Those RBI, that means you’re scoring. There’s been probably a lot of cycles that have been a lot less exciting than his because he was really helping the team win.

“He hit the home run to lead off an inning on a breaking ball. He hit the double, no I think it was the triple, at the time we were losing. Think we had a two-out rally started there, scored two runs, took the lead, I think 3-2 at the time. I don’t even remember his single with you to be honest with you. The double, that was a no-doubt double.

“I was excited for him because he really struggled for a week-and-a-half, two weeks there, and he got it going the last couple of days down in Starkville (Miss.) and picked up right where he left off, swinging the bat well.”

Moore explained his slump, which saw his average drop from .310 to .254 in a nine-game stretch, was his first real adversity as a baseball player.

Moore, the son of Kansas City Royals general manager Dayton Moore, reached out to those closest to him for guidance.

“I had to get with a lot of personal counselors and spiritual mentors of mine,” Moore said. “My mom, my dad and my grandparents always spoke life into me. I learned that through all of this, my identity was tied up too much in baseball. When that was the case, when things don’t go well, I was in a bad spot mentally and emotionally. So I had to give that stuff away.

“The book of Malachi, it’s in the Bible, tells us that, ‘I am the Lord God, I change not.’ I really needed to realize that my identity is not in baseball. It’s in Jesus. That’s a lesson I need to take into account and take into all areas of my life and realize that my identity is not in the failure in this game, because this game is built for us to fail.

“When I was failing over and over again, I wasn’t in a good spot. Thankfully (the coaching staff) believed in me and they gave me a plan.”

Moore also appreciated the confidence Van Horn showed in him.

“Coach Van Horn kept sticking me in the lineup, which I’m beyond thankful for, and they believed in me,” Moore said. “My parents believed in me and it just gave me a plan to do better, give me a better approach, see pitches better and I can’t thank those guys enough.”

Arkansas winning games while he was struggling at the plated brought Moore joy.

“I am just very thankful that our team is winning and I was able to do something to contribute to our team winning, whether it was defense or getting a sac fly or something," he said. "Just having a good at bat, running the pitcher’s pitch count up — just something that can help the team it.

“But it feels nice at the plate to help your team win again.”