'Not how I wanted to end it': Ramirez will use extra year back with Razorbacks 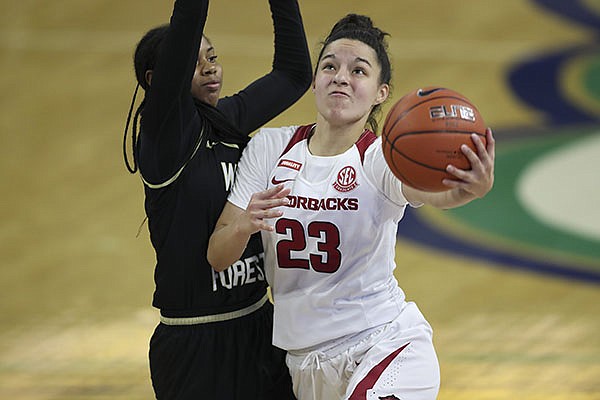 FAYETTEVILLE — Amber Ramirez will finish her college basketball career as a Razorback.

The 5-9 redshirt senior from San Antonio announced on her Twitter account late Tuesday afternoon that she will return to the University of Arkansas for her final season of eligibility.

All winter-sport athletes were given an extra year of eligibility by the NCAA because of the pandemic. The other six Razorback seniors decided to go in different directions after Arkansas was upset 66-62 in the opening round of the NCAA Tournament a week ago.

Ramirez said the chance to play one more season for Coach Mike Neighbors and to write a different ending to her Razorback career were big reasons for her return.

“Just the way the season ended, it’s not what we wanted. Not how I wanted to end it,” Ramirez said. “So I had to come back and make some more people proud and try to make some more history with the young team we’re fixing to have.

“It’s gonna be different, but I think this is a big step for me trying to be a leader that I want to be, ultimately becoming a coach. Now being the lone senior on the team, I’ve really got to step up and say, ‘I’ve been through this before. This is how you’ve gotta get it done.’ ”

All-American Chelsea Dungee and Destiny Slocum both made their intentions known to enter the upcoming WNBA Draft on social media. Jailyn Mason, Macy Weaver and Taylah Thomas entered the transfer portal, while Grayce Spangler said her basketball career is finished via Twitter.

As of now, Ramirez will be the lone senior on next season’s roster.

Neighbors said he is more comfortable with Ramirez returning.

“She knows how to do it, what to do, when to do it, how to do it and why to do it,” he said. “You don’t ever know where a kid’s gonna land with where they’re at. Where they’re at with what they want to do with their life. How they want to come back and use that year. And we’ve all seen everybody’s a little bit different. I was excited when I extended her that opportunity to come back that she jumped at it.

“I’ll sleep better at night knowing that I’ve got an upperclassman to really help with Makayla [Daniels]. We had Makayla in position to be ready to be a vocal leader. Now she’s got a sidekick. They can do it together.”

Ramirez averaged 13.5 points per game, hit a team-best 77 three-pointers and shot 43.5% from beyond the arc this season in 27 games. She scored a career-high 35 points in the Razorbacks’ win over Alabama on senior day in Walton Arena, including 8 of 14 from three-point range. That was just one off Wendi Willits’ single-game record.

Ramirez broke Willits’ single-season record for three-pointers made when she hit 106 last season. That record had stood for more than 20 years. Her three-point percentage of 44.7% is the best in program history.