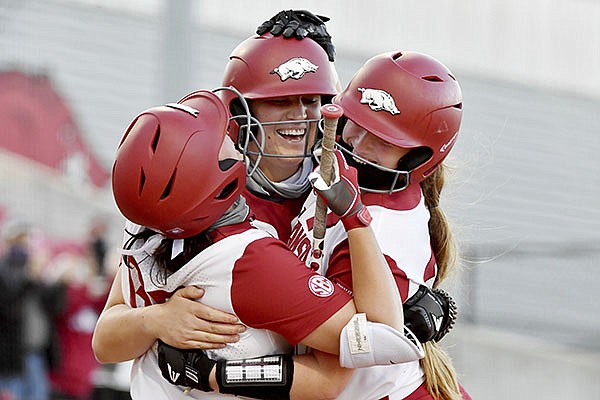 FAYETTEVILLE — The University of Arkansas softball team keeps moving on up.

The Razorbacks (28-3, 9-0 SEC) are off to the best start in school history and sit atop the league standings after a weekend sweep of Mississippi State. They have won eight in a row, 27 of their last 28 and climbed four spots this week to No. 11 in the ESPN.com/USA softball poll, which was released Tuesday.

That ties the Razorbacks’ best ranking ever. Arkansas was also No. 11 Week 2 of the 2019 season.

Arkansas Coach Courtney Deifel wants to make sure her team understands how big of a deal it is to start the season with three consecutive sweeps in SEC play.

“It’s hard to win in this conference, let alone sweep,” Deifel said. “So to have three in a row is incredible. I think what this team does is they are just really, really good in the moment.

“So I don’t want them to lose sight of the special things they are doing because when you do, you stay hungry and you’re hungrier for more. I’m just so proud of this team for continuing to fight in the moment and just be really present and step up for each other.”

The Razorbacks have won 11 games by one or two runs, and they need just three victories in their last 15 SEC games to match the program high of 12 SEC wins.

Shortstop Braxton Burnside said Sunday that the Razorbacks are brimming with confidence.

“We have all the confidence in the world,” said Burnside, who’s two-run home run snapped a 2-2 tie and proved to be the difference Sunday. “[Saturday] we were down by four and we just never even hesitated. We never even tightened up and panicked. It just doesn’t happen with this team.

“We know that we’re always in it, and that just speaks volumes about what we’re able to do. I think that’s huge going deeper into the season that these close games we have all the confidence because we know we have the tools.”

Arkansas has had this success despite missing key pieces at different times. For instance, the Razorbacks played last weekend without first baseman Danielle Gibson, who ranks among the top five in the SEC in four offensive categories. Her 14 doubles still are tops in the country.

Left fielder Hannah McEwen, a preseason All-SEC pick, missed 10 games earlier while in covid-19 protocol. Pitcher Autumn Storms, another preseason All-SEC selection, missed some time while coming back from from a preseason back injury. And starting third baseman Hannah Gambill is out indefinitely with a hand injury suffered March 9.

Pitcher Mary Haff (17-2) had a hand in all three victories over the weekend, picking up two wins and a save to earn SEC pitcher of the week honors Tuesday. She also earned the win at Kansas on Thursday. The junior from Winter Haven, Fla., leads the country with 17 wins and 117 innings pitched.

The right-hander has pitched like an ace thus far this season, Deifel said.

“She is just literally doing whatever she can to help this team win,” Deifel said. “I think she had a little bit better stuff [Sunday] than she did Friday. But she’s tired, too. She’s out there just absolutely fighting, and I’m just so proud of her and her toughness.”