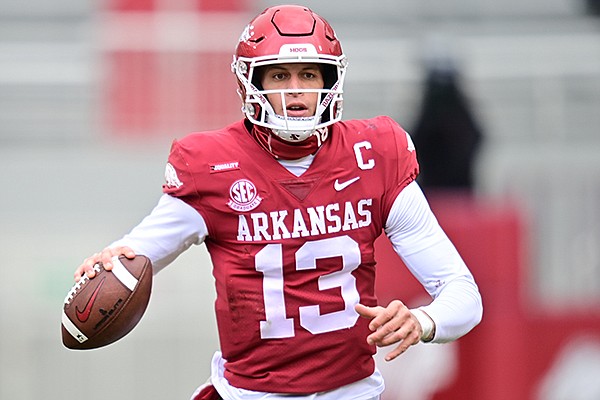 Arkansas quarterback Feleipe Franks looks to pass during a game against Alabama on Saturday, Dec. 12, 2020, in Fayetteville.

And Franks’ Razorbacks present. For while Franks quarterbacked his last game for Pittman’s Razorbacks closing 2020, the via University of Florida graduate transfer remains Arkansas embodied through his 2021 successor.

Jefferson subbed for an injured Franks completing 18 of 33 passes for 274 yards and three touchdowns and rushing for another TD starting Arkansas’ 50-48 loss at Missouri.

Meanwhile now second-year freshman No. 2 quarterback Malik Hornsby progressed in practice at his own pace behind Franks and Jefferson. Jefferson and Hornsby continued stepping up in the spring from what they began in Franks’ shadow last fall.

“What Feleipe did he bought our young kids time to develop,” Pittman said. “That time obviously was shown when KJ went out the way he played against Missouri. We needed that.”

Fetching Franks from the transfer portal made Arkansas better for 2020 and 2021, Pittman asserts.

Opening his era 3-7 through an entirely SEC schedule is huge for Pittman’s program after the preceding 2-year Chad Morris regime floundered 0-8, 0-8 in the SEC and 2-10, 2-10 overall.

The Razorbacks practiced with a confidence during 2021 spring drills that they likely would not have had in 2020 had they been allowed to practice.

The onset of the covid-19 pandemic canceled spring football practice. It altered the season for all fall sports teams including the SEC eliminating 2020 nonconference football games and reducing 12-game schedules to 10 SEC games.

So there were no gimmes in Arkansas’ three victories. Plus the Hogs knew they should have beaten Auburn in that 30-28 loss and came so close at Missouri and the 27-24 home loss to then reigning national champion LSU.

The momentum started with the season’s second game beating in Starkville, Miss. the Mississippi State Bulldogs ballyhooed then for having just beaten LSU.

“At some point when you come into a new program you have to have some kind of validation that what you’re preaching is the truth,” Pittman said. “That how you go about your daily business will end up with positive results. And so winning the second game of the year validated to the kids, I hope, that if they trust the process that we can turn the program around together.”