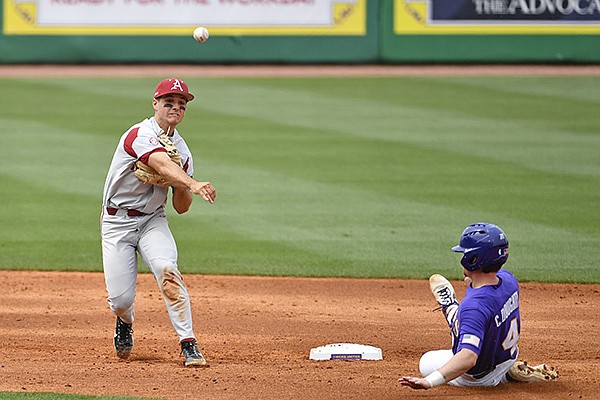 Arkansas second baseman Robert Moore (1) throws to first base for the double play after tagging LSU third baseman Cade Doughty (4) out at second base in the second inning, Saturday, May 1, 2021, at Alex Box Stadium on the campus of LSU in Baton Rouge, La. (Photo by Hillary Scheinuk/The Advocate)

The University of Arkansas won a baseball game at LSU by a football score.

The No. 1 Razorbacks clinched their first series victory at LSU since 2004 by beating the Tigers 17-10 Saturday at Alex Box Stadium in Baton Rouge in the opener of a doubleheader.

It was the most runs Arkansas ever has scored against LSU.

All nine of Arkansas’ starters got at least one hit and drive in at least one run, led by center fielder Christian Franklin (3 for 4, 2 walks, 4 RBI), second baseman Robert Moore (3 for 6, 4 RBI), right fielder Cayden Wallace (3 for 5), designated hitter Matt Goodheart (2 for 5, 2 RBI) and third baseman Cullen Smith (2 for 5, 2 RBI).

Franklin had 9 RBI in the first two games of the series. He had a three-run home run and two-run double in the Razorbacks' 7-0 victory on Friday night.

It was the most runs allowed by the Tigers in an SEC game this season, surpassing Vanderbilt’s 13-0 victory at LSU.

The Razorbacks scored their second-highest total in an SEC game after an 18-14 victory at Ole Miss.

Connor Noland, who had been sidelined by arm soreness, pitched for the Razorbacks for the first time since March 5, when he came into the game in the seventh inning with Arkansas ahead 16-3.

Noland got just 2 outs and gave up 6 hits and 6 runs before Caleb Bolden replaced him as the Tigers pulled within 16-9.

The Razorbacks scored seven runs in the fifth inning — and knocked out LSU starter AJ Labas — to take a 12-2 lead.

Goodheart hit a leadoff single, then advanced to second base on Wallace’s bunt single.

Brady Slavens hit a double on the first pitch from Labas to score Goodheart and send Wallace to third.

Another first-pitch double by Franklin scored Wallace and Slavens to make it 8-2.

Blake Money replaced Labas and gave up a two-run home run to Moore, who hit a 2-0 pitch over the right field fence for the Razorbacks’ fifth consecutive hit.

It was Moore’s 11th home run this season. It was the 12th consecutive game in which Arkansas has hit at least one home run.

The Razorbacks’ fifth inning continued when Casey Opitz walked, advanced to second base on a balk by Money and scored on Smith’s single to push the Razorbacks’ lead to 11-2.

Goodheart, batting for the second time in the inning, struck out looking.

Wallace then got his second hit of the inning when he singled to right field to score Smith from second base.

Money got Slavens — the 12th Arkansas batter of the inning — to fly out to end the top of the seventh.

The Razorbacks added four runs in the sixth inning on RBI singles by Opitz and Battles, an RBI double by Gregory and an RBI groundout by Goodheart to make it 16-2.

Arkansas starter Peyton Pallette struggled with his control and despite the Razorbacks’ 10-run lead going into the bottom of the fifth inning, Coach Dave Van Horn took him out of the game when Pallette walked leadoff man Brody Drost on four pitches.

Ryan Costeiu (6-1) replaced Pallette and retired the next three batters to keep the score at 10-2.

In the second inning LSU cut Arkansas’ lead to 5-1 when Giovanni DiGiacomo singled, went to second base on a single by Cade Doughty, advanced to third on a double-play groundout by Jordan Thompson and scored on Pallette’s wild pitch.

The Tigers got another run in the third inning when Alex Milazzo and Tre’ Morgan singled and Milazzo scored on Pallette’s wild pitch, but it could have been a bigger inning if not for a spectacular double play pulled off by Moore.

Moore made a running, over-the-shoulder catch of a fly ball by Gavin Dugas in shallow center field, then turned and threw a strike to Slavens at first base to double off Dylan Crews — who had taken off for second base assuming the ball would fall for a hit — and end the inning.

Goodheart’s sacrifice fly scored Battles to make it 17-9 in the eighth inning.

Dugas hit an RBI double in the eighth to the Razorbacks’ lead to 17-10.

Arkansas jumped out to a 5-0 lead in the first inning.

Gregory and Goodheart opened with singles to put runners on first and second base.

After Wallace popped out, Labas loaded the bases by hitting Slavens with a pitch.

Franklin followed with a single up to left field to score Gregory and Goodheart.

Labas struck out Opitz, but Smith hit a double to score Moore before Battles flew out to end the inning.

It was the second-shortest stint of Labas’ 11th starts this season. His only shorter start was 3 1/2 innings when LSU beat Louisiana Tech 16-7 in the third game of the season.

Bolden sets down LSU in order to end the inning and the game. Arkansas has won its first series in Baton Rouge since 2004. It's just the second series win in Baton Rouge in program history.

Arkansas goes 1-2-3 in the 9th. Moore had a chance to go for the cycle, but he flied out to center to end the inning.

Bolden gets a strikeout to start the inning, but he walks the next batter. The next batter grounds to third, Smith goes to second for one out, but the double play cannot be turned. The next batter doubles, scoring the runner from first and the Hogs have now given up double digit runs.

Smith with a backhand at third, and a strong throw to get the runner by a step and end the inning.

Jalen Battles leads off the inning with a double for the Razorbacks.

Gregory hits a ball to the right field warning track that is caught. Battles tags and goes to third.

Goodheart hits a short fly ball to right, Battles tags and slides in just before the tag to give the Razorbacks another run.

Bates flies out to center to end the inning.

Connor Noland in to pitch for Arkansas.

Dylan Leach comes in to catch for Arkansas.

The first batter that Noland has faced since March 5 takes him deep over the left field wall.

Noland bounces back and gets the next batter to strikeout.

The next two LSU hitters single, but then a hot shot to Smith at third is fielded and the Hogs get an out at second. Runners on the corners two away.

A single to right scores a run. Noland is not looking very sharp.

LSU gets two more runs on a triple to the right field corner.

Matt Hobbs will make a visit to Noland and the Hogs are going to start warming up somebody.

Caleb Bolden warming up for Arkansas.

Bolden walks the next batter, but gets a pop up to left center to end the inning.

Just like both of these teams, WholeHog is going to the bullpen and bringing in Seth Campbell. I'll be updating y'all to finish this game and for the next game.

Jacob Hasty in to pitch for Vietmeier.

Smith grounds out to the second baseman who flips to second for the third out.

Dylan Crews gets LSU's fourth infield single on a day when it has six hits total.

Gavin Dugas walks before DiGiacomo doubles in Crews and sends Dugaas to third, but Costeiu gets out of it after that.

Connor Noland is warming up in the Arkansas bullpen.

Christian Franklin walks and Robert Moore singles him to third. Moore only needs a double to hit for the cycle for the second time this season.

Arkansas takes a 13-2 lead when Opitz singles home Franklin and that ends the day for Money.

Peyton Pallette started the bottom of the fifth, but gave up a four-pitch walk to Brody Drost and was taken out by Arkansas head coach Dave Van Horn.

Ryay Consteiu takes over on the mound and gets Zach Arnold to ground into a fielder's choice, fans pinch-hitter Cade Belaso and retires Tre' Morgan on a tap out in front of the plate.

Matt Goodheart singles, Cayden Wallace bunts and reaches safely before Brady Slavens doubles home a run and sends Wallace to third base. Christian Franklin doubles both home to give himself nine RBis in two games.

Robert Moore's 11th home run of the season is a two-run shot that greets reliever Blake Money. It is the 12th straight game Arkansas has hit a home run.

Casey Opitz walks, moves up to second on a balk and races home on Cullen Smith's single. Seven straight Arkansas batters have reached base safely in the inning and there is still no one out.

Jalen Battles pops out in foul territory, but Money walks Gregory and gets a visit from LSU pitching coach Alan Dunn.

Money fans Goodheart, but Cayden Wallace's single plates Arkansas' seventh run of the inning and 12th of the day.

Slavens flys out to end the inning.

Giovanni DiGiacomo singled before Cade Doughty lined out to deep left. Arkansas catcher Casey Opitz guns down DiGiacomo trying to steal second and Pallette fans Thompson for his first strikeout of the day.

The Razorbacks go 1-2-3 for the first time today.

Alex Millazo and Tre' Morgan both single to set up a first-and-third situation with one out. A wild pitch allows Millazo to score and Morgan races to third on a throwing error by Arkansas catcher Casey Opitz.

Pallette, who has given up three infield singles among the four total hits he has allowed, walks Dylan Crews. The Arkansas bullpen begins to show action.

Pallette then gets out of the inning when second baseman Robert Moore makes an over-the-shoulder catch in short right field and fires to first for a double play.

Christian Franklin walks to lead off the third inning, but is erased on Robert Moore's fielder's choice. Moore is thrown out stealing for the first time this season after six previous thefts.

Labas, who threw 126 pitches in his last start, then gets out of the inning by inducing Casey Opitz to ground out.

He has thrown 57 pitches in three innings, 36 for strikes, while giving up five runs on six hits.

LSU's first hit of the day comes via an infield single by Giovanni DiGiacomo, who moves up to second when Cade Doughty also reaches on an infield hit.

Payton Pallette throws a double play ball to Jordan Thompson, but his wild pitch with Brody Drost at the plate allows a run to score.

LSU starter AJ Labas, who threw 29 pitches in the first inning, had a easier second frame. He threw 16 pitches in the second while fanning Zack Gregory and Matt Goodheart, giving up a single to Cayden Wallace and getting Brady Slavens to fly out.

Arkansas starting pitcher Peyton Pallette retires LSU 1-2-3 while reaching 95 miles per hour on his fastball in the inning.

Zack Gregory and Matt Goodheart both singled to lead off the game for Arkansas after the Razorbacks did not have a hit until the seventh inning of Friday's 7-0 win over LSU.

Cayden Wallace popped up for the first out of the inning, but Brady Slavens was hit by a pitch to load he bases for Christian Franklin.

Franklin continues his hot hitting this weekend with a two-run single that also chases Slavens to third.

Robert Moore adds to the lead with a two-run triple that plates both Slavens and Franklin and puts Arkansas ahead 4-0.

Cullen Smith continues the rally with a two-out double that scores Moore for a 5-0 advantage.

Arkansas bats around while scoring five runs on five hits.

Both games are slated to be nine-inning contests.

It is the fourth straight weekend that Arkansas is playing a doubleheader.