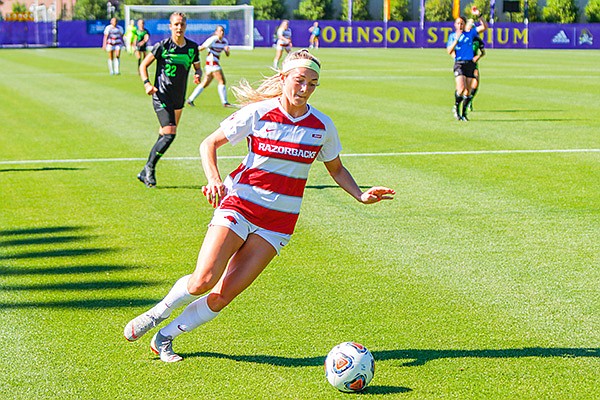 Arkansas' Parker Goins is shown during an NCAA Tournament game against East Carolina on Saturday, May 1, 2021, in Greenville, N.C. (Photo by Steven Sepulveda, ECU Athletics)

Parker Goins scored two goals to help Arkansas to a 3-1 win over Utah Valley in the second round of the NCAA women’s soccer tournament Saturday afternoon at Johnson Stadium in Greenville, N.C.

Arkansas Coach Colby Hale said getting the lead was key against an aggressive Utah Valley team.

“They played a really risky style against us, and they did create some chances but so did we,” Hale said. “On the counter, we got in four, five, six times. But yeah, we scored the goal, which was an important goal. Great ball to the back post and I think getting the goal before half was big.”

Goins scored late in the first half to give Arkansas, the No. 6 overall seed, a 1-0 lead. She tapped in the shot off a nice pass from Anna Podojil in the 41st minute.

The Razorbacks took control with a pair of goals within a two-minute span early in the second half. Goins scored again, this time in the 48th minute, and Kaelee Van Gundy added another in the 50th to give Arkansas a 3-0 advantage.

Van Gundy, a junior forward playing in her home state, added the Razorbacks’ final goal from just outside the box. Her shot hit the crossbar, caromed down and in off the Utah Valley keeper.

Hale loved the Razorbacks’ effort in the opener. Arkansas earned a first-round bye, but Utah Valley notched its first tournament win in school history earlier in the week.

“We played hard,” Hale said. “We played with great energy, effort and enthusiasm. I think we will continue to get better as the tournament goes on.

“You got a little nerves. It’s their first NCAA Tournament game. We just told the team if you play hard, we will win. I thought we did. We bring the best out of other teams … I thought Utah Valley played really hard but I thought we were the deserved 3-1 winners.”

Sadie Brockbank got Utah Valley (13-5-4) on the board in the 73rd minute. But the Western Athletic Conference tournament champions couldn’t manage anything else. The Wolverines, who edged No. 25 Memphis 1-0 on Wednesday, managed five shots on goal in the match.

This will be Arkansas’ second trip to the Sweet 16 in school history.