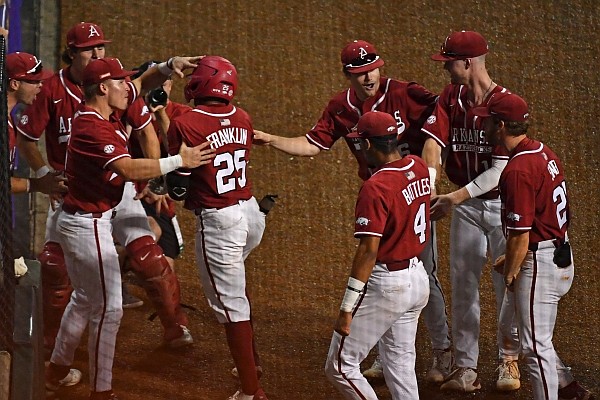 Arkansas center fielder Christian Franklin is greeted by teammates outside of the Razorbacks' dugout after hitting a home run during a game against LSU on April 30, 2021, in Baton Rouge, La.

FORECAST According to the National Weather Service, there is between a 10% and 40% chance of showers and possibly a thunderstorm during scheduled game times Saturday in Baton Rouge, La. The high temperature will be 82 degrees and the low will be 69.

NOTABLE LSU will return to full capacity at Alex Box Stadium this weekend. The change follows a proclamation by Louisiana Gov. John Bel Edwards that 100% capacity will be allowed at outdoor sporting events in the state. Masks will no longer be required for spectators. The listed capacity at Alex Box Stadium is 10,326….Arkansas has lost seven consecutive series at LSU and is looking for its first series win in Baton Rouge since 2004. The Razorbacks have not won any of five series played at the new Alex Box Stadium, which opened in 2009….LSU is led offensively by a pair of freshmen, right fielder Dylan Crews and first baseman Tre’ Morgan. Crews entered the series with a .362 batting average and 10 home runs. Morgan entered batting .358 and leads the Tigers with 12 doubles and three triples. The duo has combined for 39 extra-base hits and has been successful in 21 of 26 stolen-base attempts….Crews and Morgan are among five position starters — three freshmen and two sophomores — who are playing their first SEC season for LSU….Arkansas entered the series tied with Vanderbilt for first place in the SEC. The Razorbacks had a two-game lead over Mississippi State for first place in the SEC West….LSU has the fourth-worst SEC record, but the Tigers entered the series having won five of their last nine SEC games. LSU nearly won a sixth game during that timeframe, but blew an eight-run lead in the eighth inning at Ole Miss last Sunday….LSU is 19-11 at home this season, but just 2-8 at home against SEC teams. The Tigers have lost all three of their home conference series against Vanderbilt, Mississippi State and South Carolina….Arkansas is 13-3 away from home this season, including 10-3 in true road series at Louisiana Tech, Mississippi State, Ole Miss, South Carolina and LSU….The Razorbacks lead the NCAA in home runs (75) and walks taken (242).