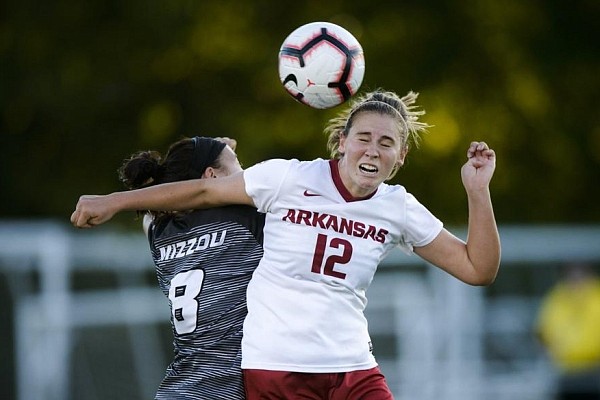 Arkansas midfielder Kayla McKeon (12) is one of several Razorbacks who have plenty of NCAA Tournament experience. She said that will be key as Arkansas opens play in the tournament against Utah Valley this afternoon in Greenville, N.C.

University of Arkansas women’s soccer Coach Colby Hale acknowledged there’s not a playbook for this season being played during a pandemic.

But the Razorbacks do have a have team with plenty of postseason experience. Experience that could pay dividends as they open NCAA Tournament against Utah Valley (13-4-4) at 3 p.m. Central today in Greenville, N.C.

“Kayla McKeon … this will be her 17th year I think,” Hale joked. “She’s played in four NCAA Tournaments, she didn’t play last year technically, but she was still there. … And we played an SEC season when people weren’t sure it could be done, so they’re experienced and dealing with those situations will go a long ways.”

Hale pointed to the Razorbacks’ women’s basketball team, which was upset in the first round of the NCAA Tournament.

“Having been there is very important,” he said. “Mike [Neighbors] could tell ya that this year. They had an older team, but they didn’t have a lot of players who had been there.

Arkansas (11-3) is making its fifth consecutive NCAA Tournament appearance and seventh in nine seasons, all under Hale. The Razorbacks did most of its work in the fall, winning the SEC regular-season title before losing in the finals of the SEC Tournament to Vanderbilt. They played four matches in the spring.

The Razorbacks haven’t played in three weeks since a 2-1 win over Arkansas State in an exhibition match. The Razorbacks were tabbed as the No. 6 overall seed in the 48-team tournament, which is being played at nine different sites around North Carolina.

Utah Valley might have an advantage getting a game under its belt, but maybe not, Hale said.

“In some ways maybe it’s an advantage for us, we’ll be a little fresher,” Hale said. “So all those factors, at the end of the day, they feel overblown. The team that scores the most goals is going to win the game. We’re going to go out and work hard and do what we do.”

The atmosphere appears a little more relaxed than the basketball tournament, Hale said.

“First of all, we’re an outdoor sport, which is a big difference,” Hale said.”It’s spread out all over North Carolina, so we don’t have 48 teams in one location. I believe they’re giving the teams a little more freedom within some bounds.”

McKeon, a senior midfielder, said the upperclassmen have communicated with their younger teammates about the postseason experience.

“The NCAA Tournament is a completely different experience than just a typical game,” said McKeon, a second-team All-SEC selection in the fall. “We understand that it’s one and done. We understand if we don’t show up that day that you know we might not finish how we want.

“I think that us being able to communicate that to the younger players that don’t exactly know what the environment is going to look like and being able to bring that to practice every day I think is really helpful.”

But the focus has been on the NCAA Tournament throughout the process, McKeon said.

“It kept everybody motivated to get all the way through the spring,” McKeon said. “To keep training hard and show the country that we are the best team int he SEC and we’re are capable of making a run for it.”