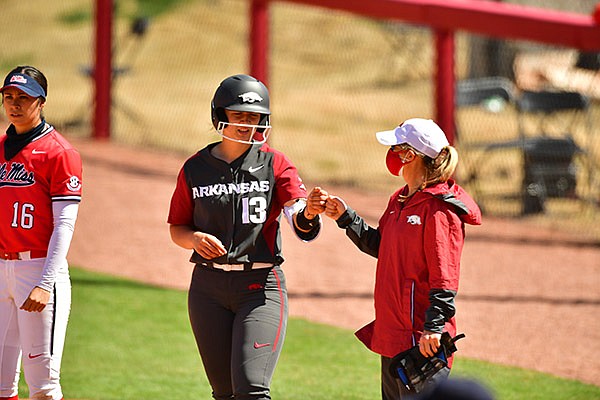 Arkansas catcher Kayla Green (13) is shown during a game against Ole Miss on Sunday, March 21, 2021, in Fayetteville.

The No. 7 University of Arkansas softball team will be looking to a make some history starting today and buck a recent trend to claim their first SEC regular-season title in school history.

The Razorbacks will have to do it in a place where the past has not been kind to them.

The Razorbacks took two of three games from the Tigers in Fayetteville in 2019, but they have lost 17 consecutive in Baton Rouge dating back to 2005 and won just two of the last 30 overall before 2019.

Arkansas enters the weekend 1 1/2 games ahead of second-place Florida (14-4) but are tied with the Gators on the loss side. Alabama and Missouri are tied for third at 12-6. Every other SEC team besides Arkansas has at least one more series left. Tennessee and Mississippi State will play a doubleheader May 5 to make up their series which was postponed because of covid-19.

The Razorbacks can guarantee at least a share of the title by sweeping LSU, but with Missouri also hosting Florida there are other scenarios also in play.

Arkansas Coach Courtney Deifel said past numbers won’t affect these Razorbacks, which are 9-0 on the road in league play.

“I just think they’re ready to go,” Deifel said. “All I’ll say is history doesn’t make it any harder to pull out a win. This team is here to change history. They came here to change that, and I think we have the team to do it.

“We know we’re in for a battle, it’s one of the toughest places to play in the league. That doesn’t matter to this team. They aren’t going to go in big-eyed and worried about what we’ve done in the past. That’s not who we are.”

Arkansas bounced back from its first back-to-back losses of the season to salvage the final game of the series against Missouri on Monday.

Catcher Kayla Green said that was a key victory.

“It was huge,” Green said. “It made a statement that you’re not going to get us three games. We’ve proven it’s hard to beat us three times. I think we all came in the locker room that day and knew it was going to be our day.

“This team is very special. We’re all on the same page. I think we’re staying the course, not getting outside ourselves. It’s amazing to see the bond we’ve created.”

Arkansas remains second in the country in home runs with 87 led by shortstop Braxton Burnside, whose 24 rank second nationally. The Razorbacks are one of two teams who have four players with 10 or more home runs.

“It’s just going to be a wait and see,” Deifel said.

Storms, a 2019 All-American, got a double-play ball in the seventh inning to notch her fourth save and close out Monday’s game. But she was unavailable because of an undisclosed physical problem on Sunday.

The Razorbacks are trying to become the first team other than Florida or Alabama to win the regular-season league title since Tennessee did it in 2007.