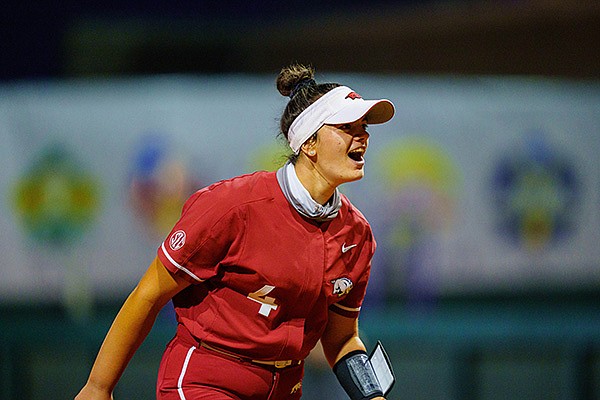 Arkansas' Mary Haff celebrates during a game against LSU on Saturday, May 1, 2021, in Baton Rouge, La. (Photo by Andrew Wevers/LSU Athletics, via SEC pool)

A junior and a senior helped No. 7 Arkansas take another step toward a SEC regular-season softball championship Saturday evening.

Senior Ryan Jackson’s run-scoring single in the top of the seventh produced the game’s only run, and junior pitcher Mary Haff tossed a complete game to help the Razorbacks notch a 1-0 win over No. 14 LSU at Tiger Park.

The win snapped a 17-game losing streak for the Razorbacks in Baton Rouge. The last time the University of Arkansas won there was April 6, 2005.

League-leading Arkansas ( 39-7, 18-4 SEC) now has a two-game lead on second-place Florida. The Gators (15-5) are a game back on the loss side after their 10-2 loss to Missouri in Columbia, Mo., earlier in the day. The Razorbacks need just one win in the last two games to clinch at least a share of their first SEC title in school history.

Jackson’s pinch-hit single to left field was her first hit since the final game of the series at South Carolina on March 14. The senior from Chino Hills, Calif., came in hitting .155 and had only nine at-bats since that hit which was also her only one in 16 at-bats in SEC play.

Arkansas Coach Courtney Deifel said Jackson has been working hard in practice even though she hasn’t gotten many opportunities lately.

“I’m just so incredibly proud of Ryan,” Deifel said. “She’s been grinding and grinding every day and her name got called and she was ready for that moment. It’s so huge. We just have so much confidence in her. A pinch-hitting role is a very tough role. It’s one of the toughest in the game I think.

“I know here name hasn’t been in the lineup every day. … It’s just so huge for her to come up in that moment.”

But Jackson’s hit was only one component of the Razorbacks’ only run of the night.

Catcher Kayla Green drew a lead-off walk and was pinch-ran for by freshman Cally Kildow. Pinch-hitter Aly Manzo couldn’t get down a sacrifice bunt and hit a pop-up foul behind home plate that LSU catcher Morgan Cummins made an incredible diving catch.

But Kildow still alertly advanced to second on the play. Keely Huffine followed with a single, then stole second to put runners at second and third with one out. Jackson then slapped a 1-1 pitch into left field off LSU starter Shelbi Sunseri (7-6) driving in the lone run of the game.

That was all Haff (22-4) needed. The right-hander struck out the side in the bottom of the seventh to put the finishing touches on a four-hitter. She struck out four and did not walk a batter over seven innings Haff threw 17 first-pitch strikes and allowed just one base runner past second base.

The redshirt junior now has 73 career victories, which is tied with Heather Schlichtman for the most in program history.

“She shook me [off)] a couple times in the last inning, and I always like when she’s doing that because it means she feels like she’s rolling,” Deifel said. “And she sees something and wants to go at it. She was lights out tonight.”

A base-running gaffe by Arkansas helped LSU (28-16, 10-9) wiggle out of a jam in the top of the fourth. The Razorbacks had runners at second and third with nobody out, but was unable to score.

Hannah Gammill walked and Danielle Gibson reached on an infield single. Both runners moved up on a wild pitch by Sunseri. She then got Linnie Malkin on a short fly ball. Gibson was also caught in rundown between second and third on the play for a double play. Kayla Green then grounded out to end the threat with Gammill at third.

Arkansas also got a nice diving catch from Huffine to strand LSU lead-off hitting Aliyah Andrews at third base in the bottom of the first inning. She singled, stole second and moved to third on a groundout.

Game two of the series is scheduled for a 5 p.m. start today and will be broadcast on the SEC Network.