Hogs hold onto SEC lead for another week 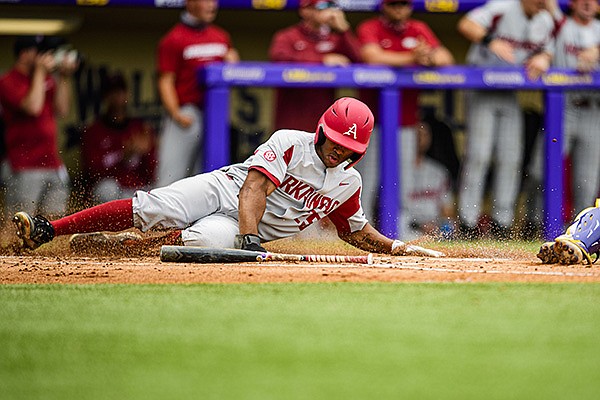 Arkansas' Christian Franklin slides into home plate during a game against LSU on Saturday, May 1, 2021, in Baton Rouge, La. (Photo by Beau Brune/LSU Athletics, via SEC pool)

Arkansas will have at least a share of the SEC lead for another week.

The Razorbacks’ series victory at LSU, coupled with Vanderbilt’s 11-8 loss at Florida on Saturday, assures Arkansas won’t be passed in the standings. The Razorbacks won two of three games at LSU.

Arkansas (34-8, 15-6 SEC) entered the weekend tied with Vanderbilt in the overall league race. The Commodores (32-8, 14-6) are scheduled to play Florida again Sunday.

The Razorbacks had a two-game lead over Mississippi State in the SEC West coming into the weekend, but the Bulldogs (32-10, 14-7) made up a game with a sweep of Texas A&M at home.

Arkansas holds the tiebreaker over Mississippi State by virtue of its sweep of the Bulldogs in March, but Mississippi State appears to have an easier end to the regular season. The Bulldogs are scheduled to close with series at No. 15 South Carolina and Alabama, and at home against Missouri, the last-place team in the SEC East.

Meanwhile, the Razorbacks are scheduled to host Georgia next week before consecutive series against ranked opponents — at No. 4 Tennessee and at home against No. 12 Florida.

Tennessee (34-11, 14-7) is tied with Mississippi State one game behind Arkansas in the SEC standings. Florida (29-13, 12-8) could move within two games of the top of the standings with a win over Vanderbilt in the series finale.

The Razorbacks are looking to win their first regular-season SEC championship since 2004. Arkansas split the past two SEC West crowns in 2018 and 2019.

“I like where we’re at,” Arkansas coach Dave Van Horn said. “We’ve played an incredibly tough schedule because we’ve had to play a lot of the big boys on the road and we’ve handled ourselves pretty well.”

Arkansas has won series at three of the SEC’s hardest places for a road team to win this season.

The Razorbacks’ 17-10 victory over LSU in the first game of Saturday’s doubleheader gave Arkansas its first series win in Baton Rouge, La., since 2004. The Razorbacks won their first series at the new Alex Box Stadium, which opened in 2009.

Arkansas previously won road series this season at Mississippi State and Ole Miss. The Razorbacks had not won at either of the Mississippi ballparks since 2010.

Arkansas also won a series at South Carolina last week for the first time since 2013, but that was less notable because the Razorbacks had only played there in one other series since then. Arkansas plays its SEC West opponents on the road every other season.

The Razorbacks have not lost a road series this season. In addition to their four SEC series victories, they won a series at No. 18 Louisiana Tech in March.

Arkansas’ trip to Tennessee in two weeks is its final scheduled road series of the season. The Razorbacks have never won five SEC road series in the same season.

Player of the week?

Arkansas center fielder Christian Franklin has a solid case to be named SEC player of the week Monday.

Franklin finished the LSU series 6 for 11 with 10 RBI. Franklin homered Friday and hit two doubles in the first game Saturday. He also had an outfield assist to throw out a runner at third base Friday in the seventh inning.

Arkansas played a doubleheader for the fourth consecutive weekend. The Razorbacks have a 5-3 record in those games against Ole Miss, Texas A&M, South Carolina and LSU.

Noland allowed six runs on six hits in the seventh inning of the first game of the doubleheader. He recorded only two outs.

Noland’s outing was bookended by no-doubt home runs off the bats of Zach Arnold and pinch hitter Drew Bianco. He entered the seventh inning pitching with a 16-3 lead, but exited with the Razorbacks’ advantage cut to 16-9.

It was the first time since March 5 that Noland pitched in a game. He had missed nearly two months while rehabbing from a strain in his right forearm.

Noland was available but did not pitch during the Razorbacks’ series at South Carolina last week, and his chances to reacclimate against less-talented teams were eliminated when midweek games against Grambling State and Missouri State were canceled the past two weeks.

When Kopps allowed a leadoff single to Bianco in the sixth inning, it snapped a streak of 28 consecutive outs dating to an April 17 outing against Texas A&M.

Kopps allowed two base runners during the sixth inning, but got out of the jam when he struck out Dylan Crews to strand runners at first and second base. Brady Slavens had a key defensive play to throw out a runner at the plate for the second out of the inning.

Kopps lowered his ERA to 0.55 in 12 appearances during SEC play. He has 57 strikeouts in 32 2/3 innings against conference opponents.

Arkansas still leads the NCAA with 76 home runs, but the Razorbacks’ pace has slowed considerably over the past two weeks.

Arkansas hit two home runs during the LSU series to bring its total to six in the past six games. Before that, the Razorbacks hit 43 homers over the span of 19 games.

Robert Moore hit Arkansas’ only home run in two games Saturday — a two-run homer to right field in the fifth inning of the opening game of the doubleheader. Moore’s 11th home run tied Matt Goodheart for the team lead.

Moore has hit three of the Razorbacks’ six home runs during the past two series.

Mulkey, a Naismith Memorial Basketball Hall of Fame inductee who won three national championships at Baylor, is a familiar face at LSU baseball games. Her son Kramer Robertson was an infielder for the Tigers from 2014-17, and Mulkey wore one of Robertson’s old jerseys onto the field.

“She's got the magic touch, doesn't she? Unbelievable,” LSU coach Paul Mainieri said. “Inspires us to a win against the No. 1 team in the country. We need to have her throw out the first pitch every game.”

• Arkansas’ 19 hits during the first game of the doubleheader were one shy of the team’s season high of 20 set March 30 against Central Arkansas.

• Freshman right-handed relief pitcher Jaxon Wiggins has not pitched for the Razorbacks since an April 18 game against Texas A&M. That is the longest stretch between outings for Wiggins, who was an Arkansas closer at one point during the season.

• Due to the midweek cancelations against Grambling State and Missouri State, the Razorbacks will play 18 of their final 19 regular-season games against SEC opponents.

• When Arkansas led LSU 16-2 through 5 1/2 innings of Saturday’s first game, it appeared the Razorbacks were on the verge of handing the Tigers one of their worst losses at their 13-year-old stadium. Oral Roberts defeated LSU 22-7 earlier this season to set the record for the most lopsided victory by an opposing team at the new Alex Box Stadium.

• With his 734th victory at Arkansas, Van Horn moved within one win of tying former Kentucky coach Keith Madison for sixth most by an SEC head coach. Madison won 735 games between 1979-2003.