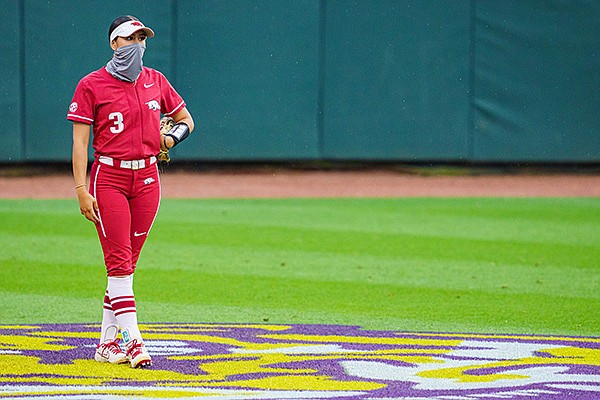 Arkansas' Larissa Cesena is shown during a game against LSU on Saturday, May 1, 2021, in Baton Rouge, La. (Photo by Andrew Wevers/LSU Athletics, via SEC pool)

Arkansas will play a doubleheader at LSU on Monday with a chance to clinch at least a share of its first SEC championship.

The first game of Monday’s doubleheader will be streamed on SEC Network-Plus. The second game will be televised by SEC Network.

The teams were scheduled to play Sunday night, but the game was postponed due to a high probability for showers and possibly a thunderstorm in Baton Rouge. The same forecast forced Arkansas' and LSU's baseball teams to play a doubleheader Saturday in Baton Rouge.

With one win Monday, the Razorbacks would be guaranteed to finish no worse than a tie for first place in the SEC standings. Arkansas can win the conference outright with a doubleheader sweep.

The possibility also exists for Alabama (38-7, 14-6) to create a three-way tie for the conference title with Arkansas and Florida.

Florida hit a three-run home run in the final inning to beat Missouri 3-2 Sunday. A loss by the Gators in that game would have clinched a share of the conference title for Arkansas.