Iyiola to transfer from Arkansas 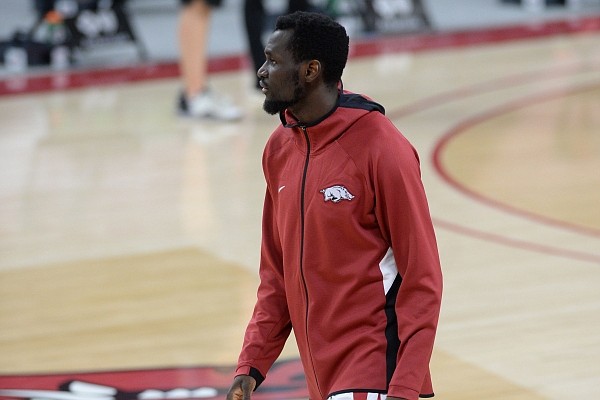 Arkansas forward Abayomi Iyiola warms up Tuesday, Feb. 16, 2021, before the start of the first half of play against Florida in Bud Walton Arena.

Iyiola, a 6-9 forward who appeared in one game in 2020-21, made the announcement Tuesday in a post to his Twitter account. He is the third scholarship player to transfer out of the program since season’s end, joining forward Ethan Henderson and guard Desi Sills.

“A big thank you to my coaches, teammates and the entire staff of the university of Arkansas,” he wrote. “Thank you to everyone that helped me through my journey at U of A. This was definitely an experience I would never forget.

“After much prayers and consideration with my family, I will be entering my name into the transfer portal. I look forward to competing academically and athletically elsewhere. My recruitment is now open.”

A transfer from Stetson, Iyiola sat out the 2019-20 season due to NCAA transfer rules. He underwent surgery on his right knee last summer after tearing his ACL prior to the start of team activities, and began practicing with the Razorbacks in late December.

Iyiola saw the floor for the first time at Arkansas in the team’s 101-73 win at South Carolina on March 2. He finished with one rebound in two minutes.

Over 63 games, Iyiola recorded 12 double-doubles. He ranked in the top 100 nationally in both offensive and defensive rebound rate, according to KenPom analytics, in his two seasons at Stetson.