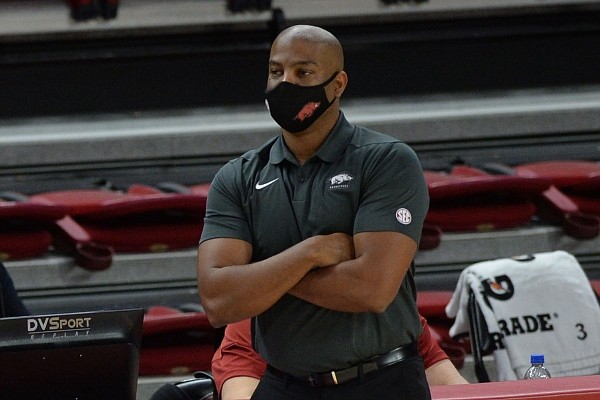 Arkansas assistant coach David Patrick watches Tuesday, Dec. 22, 2020, from the bench as guard Khalen Robinson (12) checks into the game during the first half of play against Abilene Christian in Bud Walton Arena in Fayetteville. Visit nwaonline.com/201223Daily/ for today's photo gallery.

FAYETTEVILLE — University of Arkansas Coach Eric Musselman just filled an opening on his basketball staff, but now has another.

A source confirmed David Patrick has resigned at Arkansas after one season as an assistant coach with the Razorbacks. A source told the Arkansas Democrat-Gazette that Patrick interviewed with Oklahoma last week.

College basketball reporter Jon Rothstein tweeted Tuesday that Patrick has accepted a similar position with the Sooners under first-year coach Porter Moser, who is a long-time friend of Patrick.

The news of Patrick’s departure comes one day after Musselman announced the hiring of Gus Argenal from Cal State Fullerton on Monday to be an assistant coach.

Patrick, who signed a two-year contract with Arkansas last summer, is leaving the UA without having to pay a buyout. He would have owed $400,000 — his annual salary — if he had left before May 1 for another assistant coaching job.

The buyout did not apply if Patrick left for a head coaching position. He also had a non-compete clause in his contract prohibiting him from going to another SEC school as an assistant coach.

Patrick became Musselman’s top assistant and had the title of associate head coach when he was hired on July 1, 2020, after being the head coach at California-Riverside for two seasons.

In Patrick’s only season at Arkansas, he helped the Razorbacks finish 25-7 and advance to the NCAA Tournament Elite Eight for the first time since 1995.

Patrick is the third assistant coach to leave Arkansas in Musselman’s two seasons, including Chris Crutchfield and Corey Williams.

Patrick was hired to replace Crutchfield, who left Arkansas after the 2019-20 season to become the head coach at East Central University, an NCAA Division II program in Ada, Okla.

After Crutchfield led ECU to a 10-9 record, he was hired as an assistant coach at Oregon on April 14 by Ducks Coach Dana Altman.

Altman was Arkansas’ coach for one day before he resigned his new position on April 3, 2007 to return to Creighton as coach.

Crutchfield was an assistant coach at Oklahoma for eight years before Musselman hired him to be on his first Arkansas staff.

Williams, a former head coach at Stetson, resigned at Arkansas after this season to become an assistant coach at Texas Tech under new Red Raiders Coach Mark Adams.

Patrick served as Arkansas’ head coach when the Razorbacks beat Abilene Christian 85-72 on Dec. 22 because Musselman was self-quarantining in contact tracing protocols after another staff member had tested positive for covid-19.

Musselman did not have the virus and returned to the bench for Arkansas’ next game when the Razorbacks won 97-85 at Auburn.

After this season Patrick interviewed for head coaching vacancies at San Jose State and Texas-El Paso, sources confirmed, but those jobs went to Tim Mills and Joe Golding.

Musselman and Patrick previously worked together as assistants at LSU during the 2014-15 season for then-Tigers Coach Johnny Jones, who is now at Texas Southern.

Patrick was born in Bermuda, but raised in Melbourne, Australia. After moving to Baton Rouge as a high school senior, he played at Syracuse and Louisiana-Lafayette. He played for pro teams in Australia, England and Spain.

Patrick was 27-38 at California-Riverside, but the Highlanders improved from 10-23 in his first season to 17-15 in his second season before he left for Arkansas.

Musselman and Patrick met in 2008 when Patrick was an assistant coach at Saint Mary’s, which is located in Moraga, Calif., in the San Francisco Bay area. Musselman was between coaching jobs — working as an NBA radio analyst — and used to watch Saint Mary’s practice and bring his sons to shoot and rebound afterward.

Patrick left Saint Mary’s to become a scout for the Houston Rockets from 2010-12, then went to LSU and became an assistant at TCU. He began his coaching career as an assistant at Nicholls State in 2005.

Patrick also has been appointed as an assistant coach for the Australian National Team that will play in the Olympics this summer in Tokyo.