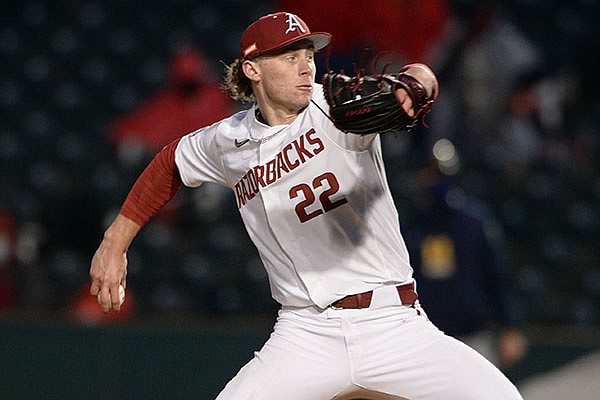 Arkansas pitcher Jaxon Wiggins throws during a game against Murray State on Friday, March 5, 2021, in Fayetteville.

FAYETTEVILLE — Arkansas fans might see right-handed pitcher Jaxon Wiggins at the other end of a game soon.

Wiggins, who has been a late-innings reliever this season, is being evaluated as a starting pitcher, Arkansas coach Dave Van Horn and pitching coach Matt Hobbs said this week. Hobbs said Wiggins threw around 65 pitches to hitters Monday.

“He’s a strong, physical kid who has not had a ton of mileage,” Hobbs said. “It’s not like he’s a kid who was throwing 110, 115 pitches every time he pitched since he was 13 or anything like that.

“He can definitely hold his stuff throughout an outing, for sure.”

Wiggins is in consideration for Arkansas’ Game 3 starting role during this weekend’s series against Georgia at Baum-Walker Stadium. The Razorbacks are expected to make a change from Lael Lockhart in the No. 3 role because Lockhart has struggled to get deep into games in recent weeks. He retired one batter in his start at LSU last weekend.

Hobbs said a rotation has not been finalized for the Georgia series. Right handers Caleb Bolden and Zebulon Vermillion are also being considered to start alongside increasingly consistent Game 1 and 2 starters Patrick Wicklander and Peyton Pallette.

Bolden and Vermillion have started SEC games this year. Vermillion allowed one hit during an eight-inning start against Alabama in March. Bolden had a 3 1/3-inning start at South Carolina two weeks ago that was expected to be short.

Wiggins has never started a college game, but coaches have said they see him as a starter later in his career.

“Jaxon’s got a really good arm,” Van Horn said Monday during his monthly Swatter’s Club address. “He had some good saves for us and we’re working on trying to get him out there a little bit more.”

Before the season, Hobbs mentioned Wiggins as one of nine pitchers who were being evaluated as a starter.

“He was right there for the third spot at the beginning of the year,” Hobbs said. “The last intrasquad before we went to Texas (for the Feb. 20-22 College Baseball Showdown), he probably threw as well as anybody who ended up starting that weekend.

“He’s got some experience getting out there and starting, in terms of what he’s done with us from an intrasquad standpoint. Like with any freshman, it’s going to be a matter of him adapting to possibly having a different role coming up here, and how he does with it.”

Featuring a 95-98 mph fastball and an 84-87 mph changeup that kept hitters off balance, Wiggins was dominant for the Razorbacks early this season. He did not allow a base runner in his first three outings — one-inning appearances against TCU, Southeast Missouri State and Murray State — and did not allow a run until his first SEC outing against Alabama.

In 10 appearances spanning 12 1/3 innings, Wiggins has allowed 7 earned runs, 5 of which came during a 2-out appearance against Ole Miss when the Razorbacks won 18-14.

Wiggins has not pitched in a game since April 18 when he allowed one base runner in a season-high two innings against Texas A&M. Hobbs said Wiggins’ lack of outings in the past two series against South Carolina and LSU have been due to the stellar relief work of Kevin Kopps, who pitched 10 1/3 innings combined in those series.

Kopps is a non-traditional closer who has pitched at least four innings during the Razorbacks’ last six weekend series. Kopps has pitched 32 2/3 innings in 12 appearances since SEC play began.

“Kevin has kind of sucked up some of those innings,” Hobbs said. “He seems like he’s his own set-up man these days.

“It’s been more circumstance that (Wiggins) hasn’t pitched in the last two weeks. It’s got nothing to do with performance. He was coming off a good outing against Texas A&M.”

Wiggins recorded all six outs on contact against the Aggies. His strikeouts have decreased and walks have increased since the start of SEC play.

During his early-season outings against TCU, SEMO, Murray State, Louisiana Tech and Oklahoma, Wiggins had 10 strikeouts and 2 walks in 4 2/3 innings.

In 7 2/3 innings against SEC opponents, Wiggins has 6 strikeouts and 6 walks, and all 10 of the hits he has allowed have come in conference play.

Hobbs said Wiggins has relied more on his fastball against SEC hitters.

“When guys know there are a lot of fastballs coming, they have a chance to be able put the bat on the ball effectively against anybody who is going to throw a large density of fastballs,” Hobbs said. “Using his pitch mix a little bit differently and trying to use more off-speed pitches will help him there.

“When he was coming out of the chute in his first couple of outings, he was throwing his fastball wherever he wanted to and using more changeups, and I think that he just started leaning on a lot of fastballs in some of those SEC weekends. SEC hitters are really good and they’re coached really well, and they can game plan for guys. Once you start to see a guy more and more, you start to get a better idea of what he’s going to do.

“I think over the past couple of weeks, Jax has worked really hard on sharpening up his off-speed stuff. If he does come out and pitch in an extended role, you’re going to see more off-speed pitches out of him.”

Van Horn and Hobbs have stressed the need for a third weekend starter who can provide some longer outings to take pressure off the bullpen.

“A guy like Jaxon potentially has the chance to be electric in that third spot,” Hobbs said.