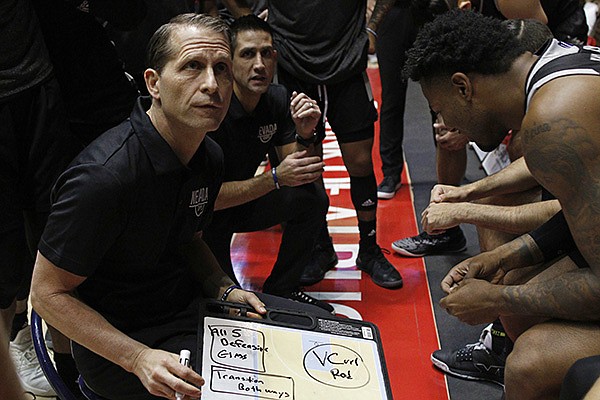 FAYETTEVILLE — Arkansas coach Eric Musselman’s basketball journey that brought him to Arkansas two years ago has been well documented.

His career has taken him to the CBA, USBL, the NBA’s D-League, the NBA and the college level. There have also been stops in the international game in the Dominican Republic and Venezuela.

Following the Razorbacks’ run to the Elite Eight in the NCAA Tournament and after receiving a new contract this year, he expressed gratitude for his current situation given the route he took to get there.

“You put your ego aside and try to work your way up the ladder when you've already been at a high level,” he said. “I promise you there's not a coach, not a family in the country that's more appreciative of the opportunity, because I've had the highest of highs and I've also had to grind from the bottom up and kind of start my career over. I think that's also why we've had success, too, because of the appreciation.

“There's a lot of coaches that maybe haven't been fired before. I know what that feels like.”

Newly hired Arkansas assistant coach Gus Argenal forged his own unique path prior to arriving at Arkansas for his second stint on a Musselman-led staff. Argenal also worked his way up the coaching ladder, experiencing varying levels of basketball along the way.

He has been a graduate assistant (Arizona State), a director of basketball operations (Texas-San Antonio), a Division I and Division II assistant coach at five schools, and a Division II head coach at Cal State East Bay.

There is a mutual respect between them in how they paid their dues in the game.

“I think when you go through that and you get an opportunity like this, you walk in the office and throw some water on your face and say, 'Wow, this is awesome,’” Argenal said Wednesday. “I dreamed about being a part of something like this. I felt that way at Nevada, and I feel like that even more here.

“I think with Coach, he really appreciates every opportunity with going through the G-League, the CBA when he was there. His different path and then deciding to go to college basketball, then his trajectory and how it's been going so quickly, I know he feels the same way.”

That connection also made Nevada’s success and run to the Sweet 16 in 2018 more special. Argenal served as an assistant under Musselman that season, and he is now eager to make another mark with the Razorbacks.

“We always go back to the NCAA Tournament,” Argenal said. “When we made that Sweet 16 run, we essentially blacked out for two straight weeks. We were just like, 'What's going on here?' We want to make some more memories like that, and a lot more here for the fans and our players, the student-athletes and the entire program.

“We want to add more banners."

Argenal said there were discussions with Musselman about joining his initial staff at Arkansas in 2019, but timing wasn’t favorable. At that time, he was interviewing for other positions and communicating with other programs.

Two years later, the timing was perfect for Argenal and his family. He added that his wife, Hannah, was in the area over the weekend searching for a home.

Argenal is ready to hit the practice floor with Musselman and feed off of the coach’s energy again.

“You have to buckle up and hop on here and be ready to go,” he said of working for Musselman. “But I think the No. 1 thing is he gives us a blueprint just like his players — the things that he wants done. If you can follow that, he gives you the answers to the tests as to what he wants. And as long as you are willing to work and do what he wants, it’s a great setup.

“He’s not to full of himself and doesn’t really have an ego, so we have a lot of fun in here....People sometimes say he is a mad scientist, but I would say he’s a defined scientist. He knows exactly what he wants, and I’m excited to keep learning from him and help him moving forward.”