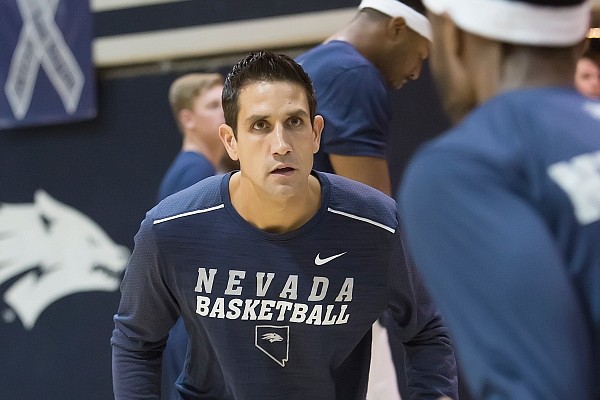 FAYETTEVILLE — Gus Argenal knows what it feels like to be with the visiting team in Walton Arena.

When the University of Arkansas beat Texas-San Antonio 67-42 on Dec. 12, 2007, Argenal was the Roadrunners’ director of basketball operations.

It was John Pelphrey’s first season as Arkansas’ coach, and he took over a team loaded with six seniors. The Razorbacks finished 23-12 and played in the NCAA Tournament.

Rob Evans, the former Ole Miss and Arizona State coach, was an assistant for Pelphrey.

Argenal broke into coaching during the 2004-05 season as a graduate assistant for Evans at Arizona State.

“I remember our game plan was to not let them get out into transition because the crowd will get into it and then we’re in big trouble,” Argenal said Wednesday. “And our guys definitely didn’t follow the scouting report and started chucking up threes from the corners and they got running, the crowd got into it.

“I was amazed by it. I had heard so much about the arena, but also just the fans and how crazy in a good way that they were. A bad way for us.

“We definitely felt it that night and I can’t wait to see what that’s going to be like next year with what we have brewing here.”

More than 13 years after that game, Argenal was back in Walton Arena speaking to the media on a Zoom call from his new office.

Argenal, 39, was hired as an Arkansas assistant coach on Monday after having the same position for the previous two seasons at Cal State Fullerton.

It’s the second time for Argenal to be on Arkansas Coach Eric Musselman’s staff. He was a Nevada assistant coach for Musselman during the 2017-18 and 2018-19 seasons when the Wolf Pack played in the NCAA Tournament and won Mountain West championships.

“You’ve got to be fired up every day,” Argenal said of working for Musselman. “I don’t think I lack the passion, the energy level for that.

“One thing you have to do, you have to try to match that. He does more in one day probably in the mid-morning than most of us do in a month.

“So you have to buckle up and hop on here and be ready to go.”

Argenal said Musselman gives his coaches and players a blueprint for how he wants things done.

“If you can follow that, he gives you the answers to the tests as to what he wants,” Argenal said. “And as long as you’re willing to work and do what he wants, it’s a great setup.

“The best thing about him doing that … is he’s a pretty fun guy. He’s not too full of himself and doesn’t really have an ego.

“So we have a lot of fun in here. There’s a lot of laughs. But when it’s time to go — when it’s five minutes before tipoff — it’s a pretty serious locker room.

“People sometimes say he’s a mad scientist, but I would say he’s a defined scientist. He knows exactly what he wants, and I’m excited to keep learning from him and help him moving forward.”

Argenal, who played point guard at Cal Davis, said he believes the biggest strength he brings to Arkansas is his knowledge of Musselman’s system and philosophy.

“I think that right now if you [tell] me, ‘Hey, we’re going to start practice in 10 minutes,’ and we haven’t practiced yet, I would know exactly what Coach would want as I walked on the floor,” Argenal said. “I would say that’s what I bring the most, knowing how we go from drill to drill, how we operate, the expectation.

“When we work somebody out in the offseason, what do we want to get done? The work ethic that has to happen, I think that’s really important.

“Obviously I’ve already dove into their video playbook that they have from last season, adding new plays, new wrinkles that they have. I’ll be dialed in and ready to go.”

Argenal said he continued to stay in contact with Musselman after they no longer worked together.

“I talked to Coach over the last two years every week probably,” he said. “So we talked a lot.”

Argenal and Musselman began talking more after Corey Williams resigned as an Arkansas assistant coach on April 15 to take a job at Texas Tech.