Take your pick (or fumble) 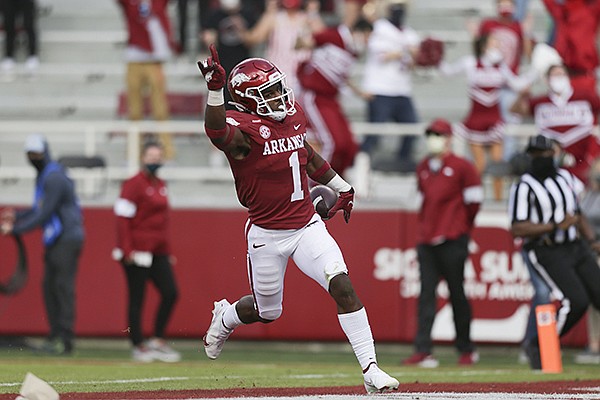 Arkansas safety Jalen Catalon returns an interception for a touchdown during a game against Ole Miss on Saturday, Oct. 17, 2020, in Fayetteville.

Would you rather make the big hit for a fumble or grab a pass interception? That was the question to some of the all-time great defensive backs and coaches at Arkansas.

It was originally supposed to be just a line or two in a feature story on Jalen Catalon for the Hawgs Illustrated football preview, scheduled to print in a couple of weeks. It blossomed into a story of its own after so many responded to the original text.

Catalon loved it when the topic came up during a Zoom interview this week. He raised his eyebrows when players like Steve Atwater, Kenoy Kennedy, Tony Bua and Ken Hamlin were mentioned.

All played safety at Arkansas and in the NFL. Atwater will be inducted into the Pro Football Hall of Fame this summer.

Atwater’s response was among the best.

“Back in the day, I would say a hit for a fumble recovery,” said the man known as the Smiling Assassin. “But with the current rules and the stiff penalties against defenders, today I would say an interception.“

I liked what Keith Burns said, too. An outside linebacker for Lou Holtz in 1980-82 and later secondary coach and defensive coordinator for Houston Nutt in 1998-99, Burns said both are important.

“This is a great question because both are game changing plays,” Burns said. “As a secondary coach, I loved the pick. But when I was a defensive coordinator, a physical forced fumble sets the tone for a tough night.”

Burns coached Kennedy during a time that Code Red was preached by the defensive coaches. The hits that resounded across the field produced turnovers – and victories. Burns has just been named head coach at Fort Worth Country Day, the second time in his career that he’s worked at the high school level.

“I know of most of those guys,” said Catalon, the rising junior who made All-SEC last year with his bone-jarring tackles and interception returns.

As far as how Catalon would answer the question, he didn’t downplay the value of a big hit, but he said, “It’s an interception. When I get a pick, it’s at the top of the list. I know that most of those guys probably said the same thing.”

Catalon loves to turn the pages of the media guide to learn about the Arkansas greats who preceded him to Fayetteville.

“Kenoy and I have mutual friends that go back to my crib (in Mansfield, Texas),” he said. “There is a teacher at my school from Kenoy’s town (Terrell). I know about Bua. He was a hard hitter. Eddie Jackson, I’ve watched him on (the Food Network), so I know him, too.”

All of the greats are watching Catalon intently. Kennedy has mentioned several times that his high school-aged sons copy his play.

Harold Horton, who has seen all of the great Arkansas safeties play, thinks Catalon might be the best to ever play the position for the Hogs. Catalon made 99 tackles with 2 forced fumbles and 3 pass interceptions last season.

“I think he is the best,” said Horton, who played and coached for Frank Broyles. “He is as a good a tackler as I’ve seen. He plays the ball well.

“Atwater was a great one, but I’m not sure he was any better than Catalon. When he makes a hit, everyone on the offensive side of the ball knows it and they won’t want the ball in his area. That is an important aspect of his play. He’s so quick to the ball in the air. He is sure fun to watch.”

Catalon is as humble as he is good. Surely, those comments are meaningful, but he said his focus is to eliminate mistakes.

“I make them in every game,” he said. “You always try to improve.”

That he’s prefer an interception over a tackle is underscored by his favorite play from last year, the 35-yard interception return for a touchdown against Ole Miss.

“That was my first interception,” he said. “So it’s definitely my favorite play. I credit my coaches (Barry Odom and Sam Carter) for putting me in the right position.”

There was an admission that another play could have ranked near the Ole Miss pick, but it’s not in the books. He broke in front of a receiver in the end zone for an interception against Alabama quarterback Mac Jones. But a targeting penalty against Hayden Henry erased that play.

“That was tough to swallow,” he said. “But Hayden was doing what I’d be trying to do, lay the wood to the quarterback. I know Hayden is crazy that way. I wish I had that one back, but I don’t blame Hayden. How could you?”

How could you not watch Catalon’s every move? He’s always about to lay the wood or make an eye-popping interception. Then you can ask the great question: which is the most important?

Would you rather have a big hit for a fumble or an interception return? Here are answers from some of the all-time great defensive backs at Arkansas.

"I was a contact player. I’d rather have the hit for the fumble because of what it does for the flow of the game. Your teammates are going to try to match your hitting."

"I wanted the pick. Of course, the added part would be with a chance to score."

"Back in the day, I would say a hit for a fumble recovery. But with the current rules and the stiff penalties against defenders, today I would say an interception."

"Both! Either one is a turnover. As a player, I was into interceptions. But as a coach, I just wanted a turnover."

"This is a great question because both are game changing plays. As a secondary coach, I loved the pick. But when I was a defensive coordinator, a physical forced fumble sets the tone for a tough night."

"Neither. I wanted a punt return. I never had many chances for a fumble hit because our front – the linemen and linebackers – seldom let the opponent get to the secondary. Not many passes in my day. But I got chances at punt return because our defense forced so many punts.

"I would take the pick over the caused fumble. I always wanted to run with the ball."

"I wanted the pass interception and then try to take it to the house."

"I like a big hit, but I’ll just say, I wanted the ball. A turnover always is the most important thing in the game. Get the ball. If it’s a big hit, you have to also recover it. A big hit with the recovery is so important, but an interception with a chance at a return is huge, too."