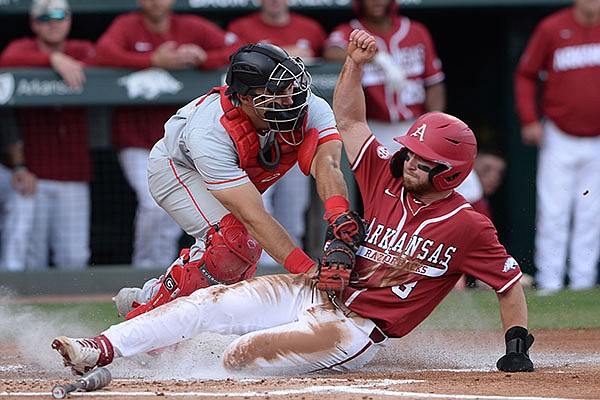 Arkansas left fielder Zack Gregory (3) is tagged out Saturday, May 8, 2021, by Georgia catcher Corey Collins while attempting to score on a fly ball out to center field during the first inning of play against Georgia at Baum-Walker Stadium in Fayetteville.

FORECAST According to the National Weather Service, Sunday will be rainy before 1 p.m., then mostly cloudy during the afternoon in Fayetteville. The high temperature will be 67 degrees and north winds could gust up to 30 mph.

NOTABLE Arkansas has not lost a weekend series this season. The Razorbacks are 10-0 in weekend series, including 7-0 in series against SEC teams….Georgia has won a series over a No. 1-ranked team on the road this season. The Bulldogs won two of three games at Vanderbilt in April….Georgia fell out of the Top 25 of the USA Today Baseball Coaches Poll this week following two home losses to Auburn….Arkansas relief pitcher Kevin Kopps was named NCBWA national pitcher of the month for April this week. Kopps allowed 2 runs in 22 1/3 innings in April, and had 42 strikeouts to 5 walks….Arkansas center fielder Christian Franklin is the reigning SEC player of the week following a 6 for 11 weekend at LSU. Franklin had 10 RBI in three games last week….The Razorbacks enter the weekend with a one-game lead in the overall SEC race. Arkansas is also one game ahead of Mississippi State in the SEC West race….Arkansas entered the series with the NCAA lead with 76 home runs this season….Arkansas is 21-5 at home this season. The Razorbacks have a 129-26 record at Baum-Walker Stadium dating to 2017….Attendance at Baum-Walker Stadium will be expanded to 7,645 for games during the month of May. That is equal to approximately 66% of total capacity at the ballpark.