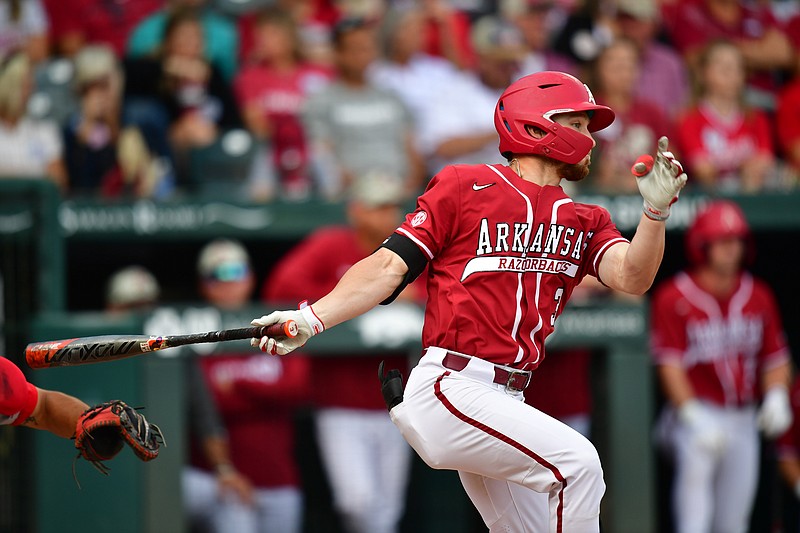 So what happened last inning was the on deck batter Riley King picked up the ball after it got by Opitz and that cost Georgia a run.

Gregory has a ball that looks like it hits off his hand, but the umpire says no. After a review the call on the field stands.

Gregory pops up to short for the first out.

Goodheart grounds out into the shift for the second out.

Wallace strikes out swinging to end the inning.

Rogers singles up the middle to start the 9th.

After trying to bunt and falling behind 0-2, Tate hits a seeing eye single that bounces off the glove of Battles.

Anderson singles to left-center and that will be it for Vermillion as Heston Tole comes in to pitch. The runners move up just 90 feet so the bases will be loaded for Tole.

Tole gets ahead 0-2 then throws a ball and the next pitch hits the batter.

A ground ball to Slavens at first, and he goes home to get the first out. That's the only out the Hogs can get.

Tole gets a strikeout on a pitch in the dirt.

Tole's day is done and Evan Taylor is in to pitch.

Evan Taylor throws a ball high and tight that gets by Opitz, but it looks like it might have hit off of something. After a meeting between the umpires, the batter is called out. I'm going to be honest I have no idea how and neither does anybody else currently. The count was 1-1 so it couldn't be a situation of a third strike being called.

Moore grounds out to short for the first out.

Opitz walks and then Nesbit strikes out on an 0-2 pitch for the second out.

Battles strikes out looking to end the inning.

Vermillion is in to pitch for Morris.

Vermillion retires Georgia in order with two strikeouts and a flyout to right field.

Woods gets two strikeouts to start the inning and then walks Goodheart on five pitches. After a long conversation Woods' day is done and Ben Harris is in to pitch.

Wallace is hit by a pitch , Goodheart advances to second.

After three mound visits from the catcher Harris threw four straight balls and the bases are loaded for Christian Franklin.

Franklin gets ahead 2-0, but then three straight strikes ends the inning and gets the Bulldogs out of the inning.

Costeiu walks the leadoff batter, Gonzalez puts down a sacrifice bunt that's fielded by Slavens who tosses to first for the first out.

Morris comes in to pitch for Costeiu.

Anderson is the first batter to face Morris and he hits it over the fence in right field on the first pitch he sees.

Morris strikes out the next two batters, but the damage is done and the Bulldogs lead.

A great play from McAlister at second robs Slavens of a single.

Franklin comes through with a single to break a streak of eight consecutive batters retired by Georgia.

Moore flies out to left for the second out.

Opitz hits a high fly ball just on the grass behind first that can't be fielded by anybody and it falls in fair territory. Franklin goes to third, Opitz stays on first. The wind pushed that ball back fair.

Welch pinch hits for Smith and he pops up to left on a full count to end the inning.

Costeiu gets Georgia in order with two strikeouts and a flyout to right.

Arkansas goes in order in the fifth. A groundout and two lineouts end the inning.

Tate gets a single up the middle to begin the inning, but then the home plate umpire is hit in the facemask by a foul ball and he's down on the ground. The field has been cleared and we're waiting for play to resume.

The umpire has been walked off the field, and we are ready to resume as a new umpire has donned the gear and stands behind Casey Opitz.

Gonzalez singles to center to give the Bulldogs two aboard.

Battles fields a ground ball behind second, steps on the bag and then throws to first for the double play.

Then McAlister has a swinging bunt to Pallette, who throws it wide of first, McAlister goes to third and the throw from right field goes into the stands.

Collins singles to right after that and that will be it for Pallette. Ryan Costeiu in to pitch for Arkansas.

Costeiu gets Tate to strikeout swinging to end the inning.

Opitz grounds out up the middle for the first out.

Smith strikes out on a fastball letter high.

Battles stumbles out of the box on a ground ball to third. He's thrown out by a step to end the inning.

Pallette has settled in for the Razorbacks, he retires Georgia in order for the first time this game, and picks up two strikeouts to bring his total to eight.

Battles singles to start the inning, Gregory works a walk and then Goodheart gives the Hogs the lead with a double to left.

Cannon gets a strikeout of Wallace for the first out of the inning.

Slavens grounds out to second, Gregory scores and Goodheart moves to third. Franklin walks and that will be it for Cannon.

Jaden Woods in to pitch.

Moore grounds out to third to end the inning.

Pallette walks the leadoff batter, but then gets a strikeout, an incredible play from Moore to get the lead runner and then another strikeout to end the inning.

Slavens works a leadoff walk, then Franklin followed with a double to right-center field.

Moore does his job by hitting a ball to deep left field. Slavens tags and scores. Franklin moves to third.

Opitz grounds out to first, Franklin has to stay at third.

Georgia gets a two-out single, but that's it. Pallette strikes out two batters and gets a fly out to center to end the inning.

Zach Gregory leads things off with a single up the middle for the Razorbacks.

Gregory steals second on an 0-2 pitch.

Goodheart grounds out to second, Gregory advances to third.

Wallace hits a short fly ball to center that is caught, Gregory tags and is thrown out at home.

The call was reviewed and confirmed. I'm watching the broadcast, but they didn't have a good angle.

Arkansas going with the camo hats and red tops today.

After a fly ball to center for the first out, McAllister takes Pallette deep to left field.

Pallette bounces back with a strikeout and then Tate doubles to left field.

Pallette gets another strikeout looking to end the inning.

After a rain delay to start the game, the Razorbacks beat Georgia 3-0 yesterday.

Arkansas has not lost a weekend series this season. The Razorbacks are 10-0 in weekend series, including 7-0 in series against SEC teams.

Georgia has won a series over a No. 1-ranked team on the road this season. The Bulldogs won two of three games at Vanderbilt in April.

Georgia fell out of the Top 25 of the USA Today Baseball Coaches Poll this week following two home losses to Auburn….Arkansas relief pitcher Kevin Kopps was named NCBWA national pitcher of the month for April this week. Kopps allowed 2 runs in 22 1/3 innings in April, and had 42 strikeouts to 5 walks.