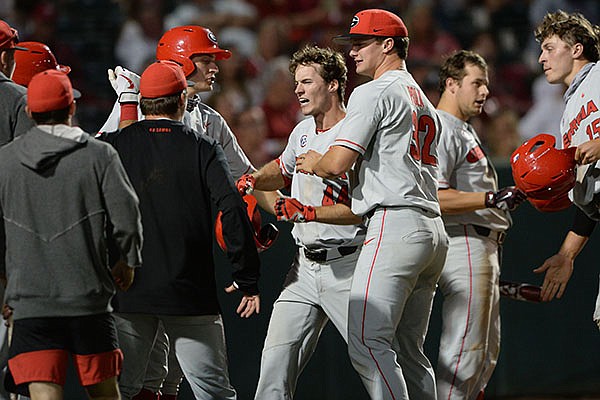 Georgia center fielder Ben Anderson (44) is congratulated by teammates after he hit a home run during the seventh inning of a game against Arkansas on Saturday, May 8, 2021, in Fayetteville.

Stricklin said he made the decision to stick with Anderson when the Razorbacks chose to bring left hander Zack Morris out of the bullpen instead of left hander Caden Monke.

“If Monke comes in, we’re pinch hitting Luke Wagner right there for Ben Anderson, but when they brought in (Morris), the splits were lefties hit him better,” Stricklin said on the Georgia postgame radio show. “I said, ‘I don’t know why, lefties hit him better,’ and he got a fastball and he crushed it into the wind. I mean the wind is blowing 20 mph. He absolutely crushed that ball. Big for Benny right there.”

Anderson’s homer came on the first pitch from Morris.

“It was down the middle, in,” Arkansas coach Dave Van Horn said. “The guy just hammered it. It was supposed to be down and away. Yeah, it was just didn’t locate the pitch.”

The home run was the fourth this season for Anderson, the Bulldogs’ leadoff hitter who is batting .214.

Georgia is 11-12 this season against SEC teams, but put a No. 1 ranking in front of an opponent’s name and the Bulldogs have been tough to beat.

Georgia’s victory over Arkansas on Saturday was its third this season over a top-ranked team. The Bulldogs (28-17) also won 14-2 and 9-1 at then-No. 1 Vanderbilt in April.

Miami is the only other team with multiple victories this season over a No. 1 team in the USA Today Baseball Coaches Poll. The Hurricanes won two of three games over then-No. 1 Florida in February.

The Razorbacks must win Sunday’s game to remain perfect in weekend series this season.

Arkansas (35-9, 16-7 SEC) has won four winner-take-all games this season, including at home against Alabama and Auburn. The Razorbacks also won a Game 3 rubber match at Ole Miss and South Carolina.

Georgia is 4-3 this season in rubber matches. The Bulldogs won winner-take-all games against North Florida, Vanderbilt, Kentucky and Missouri, and lost to Tennessee, South Carolina and Auburn.

Dating to the 2019 super regional against Ole Miss, Arkansas has won six consecutive rubber matches. Since the beginning of the 2018 season, the Razorbacks are 13-7 in rubber games, including 9-1 at Baum-Walker Stadium.

Georgia will start its No. 1 pitcher Ryan Webb on Sunday.

Webb (3-3, 3.04 ERA) was held until the final game of the series because he suffered from back spasms during his previous start against Auburn on April 29. The left hander has pitched 53 1/3 innings this season.

“We’ve got a lot of pieces behind him, but we need Ryan to give us a good start,” Stricklin said.

Arkansas will start right hander Caleb Bolden on Sunday. Bolden made his first SEC start two weeks ago and pitched 3 1/3 innings of a victory at South Carolina.

The Razorbacks have several pitchers available Sunday, including right hander Jaxon Wiggins, who was considered for the Game 3 start. Top relievers Kevin Kopps and Caden Monke are also available.

“We just felt like we should probably go with an older guy that started some games,” Van Horn said. “We can always use (Wiggins) later in the game.”

Home plate umpire Ronnie Teague left the game during the top of the fifth inning to be evaluated after he was hit in the mask with a foul ball. No official diagnosis was given.

The game was delayed for around 15 minutes while Teague was evaluated on the field by both teams’ trainers and Arkansas team physician Al Gordon.

The final four-plus innings were played with three umpires. Mayhue Edwards moved from second base to behind home plate after Teague was helped off the field.