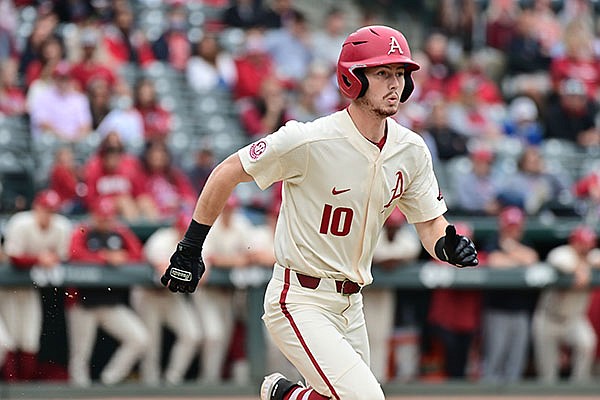 Arkansas designated hitter Matt Goodheart runs toward first base during a game against Georgia on Sunday, May 9, 2021, in Fayetteville.

With another big dose of reliever Kevin Kopps, No. 1 Arkansas rallied from a 3-0 deficit with homers from Matt Goodheart and Jalen Battles to beat Georgia, 5-3, and win the SEC baseball series.

Kopps (7-0) entered the game with the Hogs trailing 3-0 with two outs in the fifth inning. He blanked the Bulldogs the rest of the way, striking out five and allowing just two hits.

Battles hit a two-run single in the bottom of the fifth. Goodheart hit a massive 460-foot homer in the sixth to pull the Hogs even at 3-3. Battles hit another solo shot in the seventh, just barely clearing the wall in straight away center.

Georgia starter Ryan Webb, masterful through four innings, left with a sore back after throwing two pitches after the Battles homer. Two walks and a Christian Franklin single to center set the final score.

Kopps threw 54 pitches for a save in a 3-0 victory Friday night. He threw 55 pitches on Sunday.

After playing long ball, the Hogs tried small ball. But they came up empty. Matt Goodheart walked and Casey Opitz singled. They moved up on a Jalen Battles sacrifice bunt. But Jacob Nesbit fanned and Brayden Webb popped to deep left to end the threat.

Kevin Kopps gave up two singles, but he struck out the side to strand both runners. He got slugger Connor Tate with one out. He got swing and misses from Riley King and Chaney Rogers to end the eighth.

Kopps is up to 45 pitches on the day. He threw 54 pitches on Friday night.

Jalen Battles gave the Hogs their first lead of the game. He homered to straight away center, the second homer in two innings for the Hogs against Ryan Webb. They had not hit a homer in the series. It's their nation leading 78th homer.

Webb left with a 1-1 count on Zack Gregory. He was pulled from last week's game because of back spasms. He was pitching on two extra days of rest.

Arkansas reliever Kevin Kopps worked an easy seventh. He's thrown 26 pitches in 2 1/3 hitless innings. He fanned Joshua McCallister to end the seventh, his first strikeout of the game. He threw 54 pitches for a save Friday night.

Matt Goodheart blasted a solo homer to center field to tie the game. His two-out shot came after working Georgia ace Ryan Webb to a 2-0 count. It was out of the park by plenty, just to the left of the batter's eye. It was estimated at 460 feet. Goodheart slammed a double to left center to start the fifth.

The Bulldogs got a runner on a Jalen Battles error. It was a hard liner that Battles tried for a stab instead of stepping towards the ball. Cole Tate popped to right to end the inning. The first two Bulldogs were out on soft bouncers.

Arkansas finally solved Ryan Webb with three straight hits to leadoff the fifth. Matt Goodheart doubled to left center and Casey Opitz singled to left. A wild throw to the plate -- after Goodheart had to hold at third after bumping a fielder -- moved Opitz to second. Jalen Battles bounced a single past the second baseman to drive home two. Zack Gregory followed with a single, but a Brady Slavens fly to center ended the threat.

The Bulldogs got a lead-off walk from Ben Anderson, but did not score. Caden Monk retired Joshua McCallister on a pop to right. The Hogs could have gotten out of the inning on a double play, but Jalen Battles threw low on the relay throw. Dave Van Horn pulled Monke in favor of Kevin Kopps to get the third out, a bouncer to shortstop by danger clean-up man Connor Tate. Tate had a two-run RBI in the third inning.

Georgia starter Ryan Webb has faced only two over the minimum. He stranded Christian Franklin after a two-out double when Robert Moore bounced to third base for the third out. Cayden Wallace, who had a single in the first inning, was out on a deep fly to center. Centerfielder Ben Anderson ranged into the alley to his right for a Brady Slavens liner.

Caden Monke worked around a one-out single to Cole Tate. Monke bounced off the mound to field a tapper to his right. He went to a knee, but still had time for the throw to first. Fernando Gonzalez fanned with Casey Opitz digging it out of the dirt.

The Razorbacks went in order. Jalen Battles and Jacob Nesbit both hit the ball hard but were retired. Battles hit a deep fly to center. Nesbit hit a one-bounce liner to shortstop. Zack Gregory struckout.

Georgia scored three times on four singles. One of them was a pop fly to center that fell when Christian Franklin didn't get a proper read. Cole Tate, Fernando Gonzalez and Ben Anderson singled off Caleb Bolden, plating one. Reliever Caden Monke got a ground out before Connor Tate delivered a sharp liner to left to drive home two runs. All three runs were charged to Bolden.

Riley King reached with two outs when he was hit by a Caleb bolden pitch. It appeared the ball bounced off the knob of his bat. But the call of home plate umpire Mark Chapman stood upon video review. Chaney Rogers struckout to end the inning. It was Bolden's second strikeout of the inning.

Lead-off man Zack Gregory bounced out to second base, Cayden Wallace singled to center. After Brady Slavens struckout, Wallace moved to second on a wild pitch. Christian Franklin struck out on a breaking ball in the dirt to end the inning.

Arkansas starter Caleb Bolden worked around a lead-off walk to Ben Anderson. He started a double play on a Corey Collins comebacker, firing to Jalen Battles at second for a quick turn. So Bolden faced the minimum in the first inning.

Arkansas is trying to win its eighth consecutive series today. On the other side is Georgia, which is one of just two teams to win a series against a No. 1-ranked team this year.

The Bulldogs are throwing their ace today, left hander Ryan Webb, who suffered from back spasms last week. Webb was held out two extra days for rest.

Arkansas will start right hander Caleb Bolden. Behind him is a full bullpen that includes Jaxon Wiggins, Caden Monke and Kevin Kopps.

It is a cool, overcast day and the wind is blowing straight out to center field. The north wind could gust up to 30 mph.

Arkansas is wearing its cream jerseys with red hats. Georgia is in black tops and hats, and gray pants.