Recruiting more than one job for UA hire 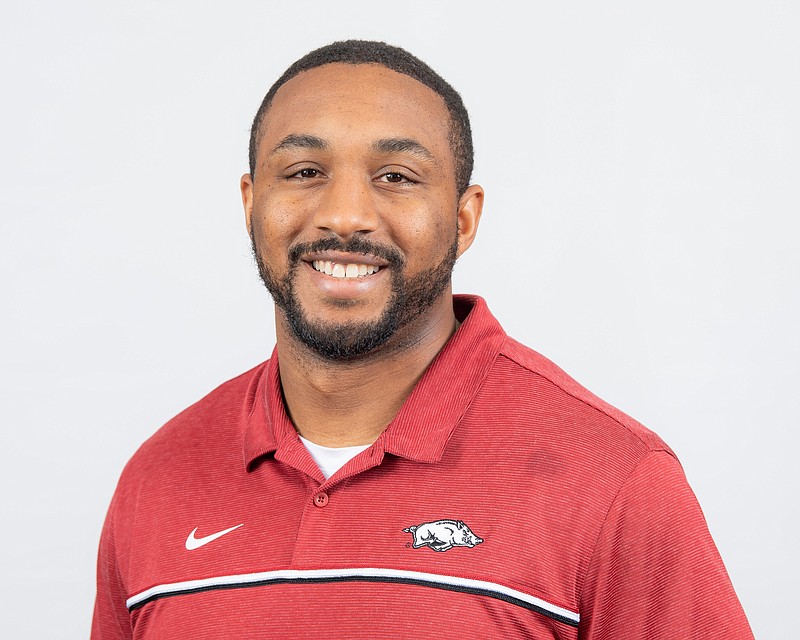 It's believed that University of Arkansas executive director of recruiting and player personnel Butler Benton is the first to have the latter part of his title added to his responsibilities at the UA.

Benton, who was officially named to his positions in early March, was director of player personnel at Georgia Southern since September of last year and was player personnel coordinator at Michigan State from 2016-20 before coming to Fayetteville.

"I guess for me, it's similar to what I've been doing. I've been on the personnel side," Benton said. "Obviously was heavy on the football emphasis of it in terms of initial identification, evaluation, scouting, ranking guys. Doing a lot of the preliminary film work. That's something I'm very familiar with, and then there's the recruiting side of it.

"My first season at Michigan State, I was the on-campus recruiting coordinator. So I've had experience on that side, too."

"You have the personnel side that scouts and evaluates and then the recruiting side, which handles all of the correspondences, the communication, the planning, logistics, getting them to campus, the ... work in terms of once they're committed and signed to getting all the transcripts to getting them into school and boarding," Benton said.

Benton's first mission was to understand what Coach Sam Pittman and his staff expected before adding his own stamp on the job.

"I switched up some things on how we evaluate, how we rank guys in our database. Some of the different services we're using and how we work flowing things to our coaches in an effort to make things as efficient as possible while also making sure we get everything done."

Arkansas is expected to host prospects on official visits for the first time since February 2020 during the June 4-6 weekend. At least six recruits and their families are expected.

"I'm truly looking forward to that because I believe Arkansas has much to sell, and I can't wait until we're able to do that," Benton said.

He explored Northwest Arkansas soon after his arrival.

"I drove around, looked everywhere around the campus just to see how nice Fayetteville was," he said. "I drove up to Rogers, to Bentonville. Just saw how vibrant and happening this whole area was with the businesses and everything."

House Bill 1671 that allows college athletes in the state to be compensated for use of their names, images and likenesses passed in the Arkansas House of Representatives by a 97-1 vote on April 14. It was followed by a 34-1 vote in favor in the state Senate.

Gov. Asa Hutchinson signed the bill into law, making Arkansas the 11th state to do so. The new law will go into effect Jan. 1.

"We are the only Power 5 school in the state -- no pro teams and a bunch of businesses in this region -- so it's an opportunity for kids to maximize their earning potential through name, image and likeness," Benton said. "Also brand themselves and put themselves in position after graduation as well. There's a lot of things I'm planning to sell and communicate to the kids once we get them on campus."

Benton, who was a four-year letterman at running back for Cincinnati from 2004-07, believes his background as an athlete helps him understand the importance of sincerity while communicating with recruits.

While on Kirby Smart's staff at Georgia, Pittman said he learned about "recruiting on steroids," and his staff has adopted the same philosophy at Arkansas.

"Our coaches work recruiting wise," Benton said. "They're on the phone, they're on Facetime. Coach Pittman is on the phone a lot throughout the week. At the end of the day, our coaches are going."

Although much of what Arkansas has done in past official visits will remain, Benton plans to make a few tweaks.

"We'll switch some things up in terms of what we're presenting to them," he said. "Some of the new legislation and things like that apply to them. We'll hit some of that."

Benton hopes to take advantage of the NCAA rule allowing schools to take recruits anywhere within a 30-mile radius of campus during official visits so the prospects and family members can see more of Northwest Arkansas.

"We'll get them around town, maybe potentially to Rogers and Bentonville," he said. "So there's a way for them to see more that we might end up doing on official visits. Nothing is concrete on that yet. We're still working through the finer details of the visits."

The 10 Arkansas assistants are assigned recruiting territories, but the main focus is for each assistant to pursue prospects at the positions they coach.

The coronavirus pandemic forced the NCAA to enact a dead period on March 13, 2020, and left many 2021 prospects making college decisions without the benefit of visiting a college campus.

While the dead period will be lifted June 1, Benton expects schools to continue using some Zoom meetings prior to a recruit and his family getting to campus.

"I think the pandemic has changed things in terms of people doing things with Zoom meetings," Benton said. "You can have academics, player development and the weight room all on a Zoom meeting. There will be instances where certain parents aren't able to make it certain weekends, and you can Zoom with them and hit them with hot topics or meetings they can learn something from."

But nothing beats the personal touches.

"We're still going to be a big advocate for getting people to campus because it's such an amazing campus and an amazing area," Benton said. "There's nothing like feeling it and seeing it and feeling the energy when you're around the staff in the building. I think that's extremely impactful, so that's going to be a high priority."

The Hogs will continue to focus on in-state talent first, followed by the bordering states along with Alabama, Georgia, Florida and Kansas.

Arkansas does have a commitment from safety Myles Rowser of Belleville, Mich. Benton said the Hogs will recruit his home state along with Ohio and Illinois, too.

"I have a lot of relationships and connections there," Benton said of Michigan. "I believe we're going to recruit the Ohio area a little more as well. I spent seven years in Ohio. It's an area full of talent."