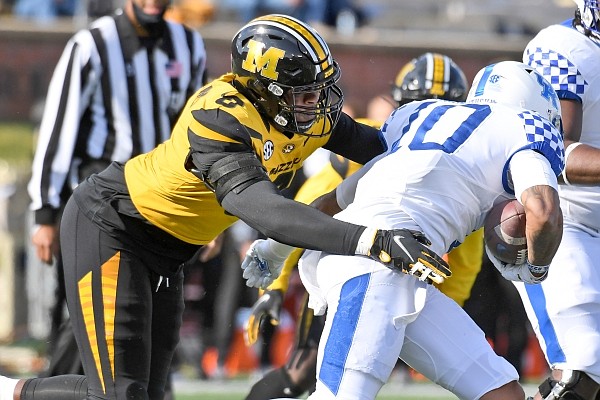 When former Missouri defensive end Tre Williams entered the NCAA transfer portal in April, the University of Arkansas made contact and the decision to become a Razorback was an easy one.

"It was just a perfect fit for me," Williams said. "To have the opportunity to remain in the SEC and play every week and compete against the best is what I love to do."

Williams, 6-5, 260 pounds, originally entered the portal in December and committed to Houston in January.

He recorded 85 tackles, 15 tackles for loss and 8.5 sacks in four seasons for the Tigers. He inked with Missouri in 2016 when Arkansas defensive coordinator Barry Odom was the Tigers' coach.

"Getting the opportunity to play for coach Odom again was also another big draw," Williams said. "He's a good man, a good coach and a great defensive mind."

Williams' goal is to get drafted and play in the NFL.

"I think that Arkansas is a place that can allow me the opportunity to accomplish those goals," he said.

The Razorback fans caught his attention while he was a Tiger.

"Having played against Arkansas in the past while at Mizzou, I like the way the fans here seem to really care about their team and love football," Williams said. "That showed when I committed here. The fans just showed so much love and were excited to have me so that was nice, similar to the way Mizzou fans were being from Columbia. Mizzou will always be a part of me and who I am, but I'm excited about this new chapter at Arkansas."

Williams is confident in what Coach Sam Pittman, Odom and the staff are building in Fayetteville.

"I'm excited to be a part of it and help Arkansas get back to its winning ways of old," he said.