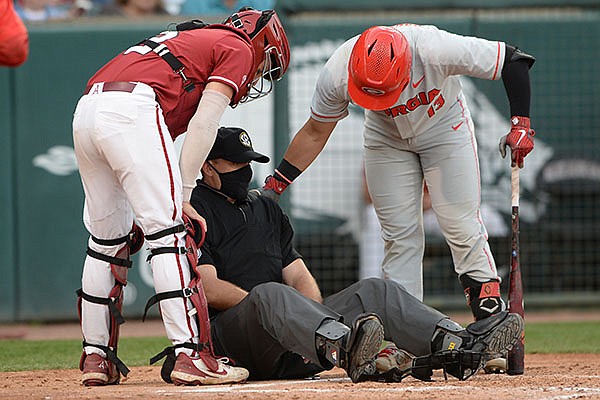 Arkansas catcher Casey Opitz (left) and Georgia designated hitter Fernando Gonzalez (right) check on home plate umpire Ronnie Teague after Teague was hit in the mask with a foul ball during a game Saturday, May 8, 2021, in Fayetteville.

According to a news release, Teague was taken to an area hospital after he was hit in the mask with a foul ball during the top of the fifth inning. Teague sat on the field for several minutes as he was tended to by both teams’ trainers and Arkansas team physician Al Gordon. The game was delayed for 15 minutes.

Veteran SEC umpire Tony Walsh traveled to Fayetteville for Sunday’s series finale between the Razorbacks and Bulldogs. Walsh will work second base Sunday as Teague’s replacement.

Walsh was the crew chief for the Kentucky-Florida series that ended Saturday in Lexington, Ky.

Through an Arkansas spokesman, Teague expressed appreciation for the care of the Arkansas and Georgia medical teams. He is resting at his hotel and will return home Monday.